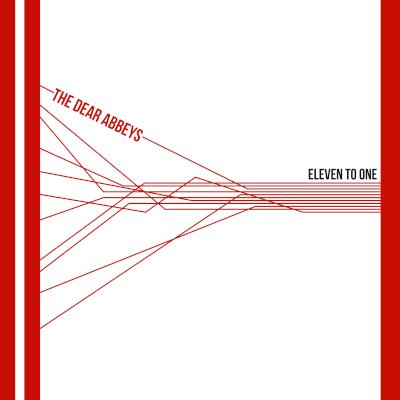 The Dear Abbeys' latest EP, Eleven to One, is all over the place. This is a group that has the history to draw from its previous experiences, but the trajectory of the group's albums that I've reviewed for RARB — Proclamation and Four Score — show the Boston University all-male group to be uneven for most of the last decade.

There are some things The Dear Abbeys do well. For example, the phrasing on Bad is beautiful. The arrangement by Jonathan Corson lends itself well to some memorably stretchy phrases, and The Dear Abbeys deliver them well and have an overall dynamic arc to the whole song. The group also ends the EP strongly with Don't Stop Me Now, which has a lot of energy and good phrasing and is definitely the EP's earworm.

Unfortunately, the EP has more problems than strengths. Most notably, the group has several songs in a row with soloists who sound rough on their low notes. Retrograde showcases Alex Miller's gorgeous solo voice, which sounds perfectly dreamlike — except on the lower notes, which are jarringly rough. A Change Is Gonna Come is even bumpier in the lower sections, which is a shame because the harmony between Jonathan Corson and Nicholas Griggs-Drane at the end of the song is stunning. There are some lovely moments on both of these songs that show that these singers have gorgeous lead voices in the right range. The Dear Abbeys need to shift their approach for either their song selection or their soloist selection to find the right match between lead and song.

I want to hear more from The Dear Abbeys: more energy, more emotion, more dynamics, more power, more feeling. They hint at those in some of these songs, but they never get it all. It sounds as though they're simply singing All of Me instead of feeling the song; Uprising should grow and grow and grow and explode, but it never gets pushed into that rockstar climax. Eleven to One shows some promise from The Dear Abbeys, but the singers never quite capture the right combination of arrangement, soloist, performance, and emotion.

Before being assigned this album, my familiarity with The Dear Abbeys was limited to a few of their high-quality quasi-transcription tracks from compilation albums, namely Doctor Worm and Spaceman, that were not wildly inventive but fit the bill of solid vocal renditions of enjoyable songs. The all-male group from Boston University seems to have progressed in its evolution toward making stronger choices, and the tracks included in Eleven to One are truly non-transcriptive arrangements with some wonderful moments. But while many of the original choices made serve the group's fun nature well, some inconsistencies and eyebrow-raising moments keep this album from excellence.

The first half of the Eleven to One is filled with energy, intensity, and a great arranging style. Bad and Retrograde set a groove and elaborate upon it with excellent voicing of advanced chords, staggered entrances and vowel changes to vary texture, and quality solo and vocal percussion work. A Change Is Gonna Come, the third track, is successful by way of the "less is more" principle: the arrangement does not obscure the solo's powerful message. All parties involved in the production of this song deserve credit, especially Tim Bongiovanni of Northgate Productions for his superb handling of dynamics for the different sections and entrances, navigating transitions smoothly and taking listeners on a journey as led by the soloists.

Unfortunately, the second half of the album does not quite live up to the first. The downward spiral begins with Uprising. The aural experience of the original Muse track for a highly trained listener is one of uncertainty, and a sense of wonder. The problem I have with this cover is that the syllables sound forced to create instrument emulation, especially in the bass part. The background rhythms that accompany these syllables are often angular and scarcely written to the strengths or characteristics of the vocal instrument. I can appreciate moments, such as the text-painted stop on the word "stop", a clever aural illustration of the word being sung. But sadly, less effective choices dominate the track.

Arrangement issues continue into All of Me, whose refrain is a bit too complicated and whose background lyrics draw focus from the solo. The chords also do not sound as full harmonically or as strong in terms of voice leading. It is a fine rendition, but does not stand out over the myriad of John Legend covers floating around the a cappella universe. Don't Stop Me Now begins strong but takes a few questionable turns. Randomly enthusiastic bass lines aside, the track is actually a surprise medley. I do not typically take issue with cutaways to other songs, but in this case the feel is far more reminiscent of Bruno Mars' Runaway Baby than Gloria Estefan's Turn the Beat Around, neither of which has any obvious connection to the Queen tune. The inclusion of Turn the Beat Around in a different feel followed by an awkward transition back into Don't Stop Me Now makes this choice too much of a stretch for me, and therefore it is difficult to fully enjoy this track.

There is a lot to enjoy in Eleven to One, especially in the first half. Despite a few tracks that fall below their standard, The Dear Abbeys have been a group worth listening to for some time, and this album is no exception.

Eleven to One showcases eleven strong vocal athletes producing one rock-solid sound as a group, given the polyphonic nature of their arrangements. The Dear Abbeys, an all-male group from Boston University, picked a wide-ranging mix of covers on this EP that features hits from Michael Jackson, James Blake, Sam Cooke, Muse, John Legend, and Queen. The positioning of strong, high-energy songs in the right track order is a smart decision for this release as well.

Speaking of energy, the group has it all in Bad; it's a good track to get your attention and say "OK, I want some more of that!" The mellow, sugar-sweet background harmonies in Retrograde are such a perfect treat to start the day. The track is mixed well, and the random tenor note bending gives it an eerie feeling. The arranger, Yanni Metaxas, is successful in building a song with a repetitive chord structure to a climactic and satisfying ending. Changing the key of the song three semitones down to fit Alex Miller's vocal range doesn't cause it to lose the original "feel" of the music. The creative answer and echo effect of the background vocals in Uprising sounds like a fun a cappella exercise — I can almost imagine the group being a younger version of the The King's Singers singing a modern funky fugue. Lastly, Don't Stop Me Now ends the EP with a blast, perfectly mashed-up with Turn the Beat Around. Hands down to Matt Vera who kills the solo, and the arranger Oliver Baverstam who makes me appreciate a song I never knew I'd like as an a cappella version. Ending an EP this way makes you say, "Yeah! That's what I'm talking about!".

There are some spots in the arrangement of A Change Is Gonna Come that feel a bit disconnected from the song. But even though the key is lowered, soloists Jonathan Corson and Nicholas Griggs-Drane don't lose the original groove and I still buy it. However, the reinvention of John Legend's All of Me doesn't win me over. There are some backround syllables used in the arrangement ("deh doh", "jen na", "way ah", and a lot more) that result in the song sounding a bit silly for such a seriously emotional song. This group has some things to improve on; mostly with the arranging style by leaving the silly background syllables to appropriate instances only.

Still, strong performances on this EP outweigh the weaker moments. The group's tight sound is the key to keeping you a fan. Eleven to One can be fun and enjoyable if you don't mind a little silliness here and there.

Eleven to One is available on iTunes and streams on Spotify. Visit the group's web site for more information.