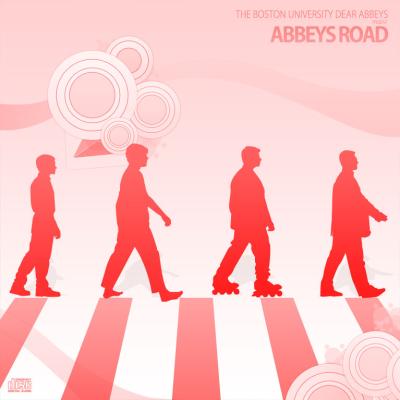 Here's to the Dear Abbeys, who show that it is indeed possible to make an old-school vocalese cover album that sounds really good. With this album, it's official — the rest of you have no excuses. You with your doo-doo-doo arrangements and screechy air guitar solos, you should sound like this.

Granted, you have to have good voices to make such an album, and that's no mean feat. Most of the 2005 men's group CARA nominees didn't have this kind of vocal talent. I loved the screaming tenor on Baba O'Riley and the velvety, music-school baritone on Ghost Train, as well as the alt-pop strain of Harder To Breathe — you ask me, this is the kind of thing that should be held out as a role model, not another breathy high guy singing through his nose.

The great thing about this album is that it sounds natural, for all its engineered glory. I know that the group can't sound like this live (check out the synthesized guitars on Renegade et al), but I also get a sense that they can get close enough live that the last 10% isn't so much of an issue. I applaud the Dear Abbeys for putting the time and money into the recording, but I also applaud them from starting from such a singable base. These arrangements are generally mellifluous and easy on the ears. This guy Victor Sandman, he has a real eye for the possible and the unusual-but-not-too-weird. Plus the voices (notably my man Victor's) are great, I guess it all comes back to that.

I generally don't love the Beatles and I'm not big on medleys, but I kinda fell for the collage of I Feel Fine anyway. It's fitting for an album called Abbeys Road, and it reinforces my point that these guys know what they're about. Most of the songs on this disc are real songs, from the days when pop music had a tune and a point and a pulse. This is straight-up singing and straight-up sound, processed enough to be clean to the contemporary ear. It's a lot like rock and roll and I like it.

While I may have once lamented the pervasive influence of studio wizardry on modern a cappella, I've long since come to reconsider that opinion, and not just because Bill Hare repeatedly told me I was wrong.

But forgetting for a moment the philosophical debate over whether a less "produced" or manipulated sound is somehow "purer" a cappella, and forgetting for a moment whether technology has widened the musical moat between "studio" vs. "concert" a cappella, and ignoring the semantics of whether glitzy processing is itself an integral part of the creative process or a gloss that can make a mediocre product that much better, I have come to the conclusion that the single most negative impact that studio technology has had on collegiate a cappella is laziness. Specifically in the area of arranging.

This has been on my mind for quite awhile — most acutely while listening to this year's CARA submissions — and it's a bit of a shame that it hit me so noticeably hard while listening to the Boston University Dear Abbeys' latest album Abbeys Road. Truth is, it's an enjoyable CD and taken strictly at face (or ear) value, if you like the track selection, you'll probably enjoy it. Victor Sandman — about whose I Still Haven't Found What I'm Looking For I raved about on Hyannis Sound's Route 6 — is the unquestionable standout here, with a soaring tenor that elevates the four tracks on which he contributes solos, and an arranging technique that is consistently a notch above his colleagues in the group.

But it's precisely in most of the non-Sandman arrangements (and to be fair, even a bit on his too) that a glaring problem is exposed that can be directly linked to the advances made in studio technology and the easy access that collegiate groups have to those "tricks". While there are always exceptions (many of which Bill has posted about in the RARB forum — the 'Bubs come to mind), more and more, the albums I'm reviewing for RARB feature arrangements that amount to little more than a multi-layer percussion track, a bass line, and a series of block "oohs" and "aahs" underneath a soloist. The sum of those parts is a more than adequate representation of the original song, but such arrangements still leave me feeling thoroughly empty inside, for if one were to strip away the fancy-shmancy VP and occasional guitar/distortion effects, the remaining arrangement wouldn't even give a 1986 collegiate a cappella group a run for its money. And that's unforgiveable, especially on a cappella "covers" where the arrangement is so much of what determines whether covering a given song is itself musically interesting and worthwhile.

Listen to Ghost Train, Renegade and Mona Lisas and Mad Hatters on this album (sadly, the three are ordered successively) and you'll be painfully aware of these issues. She's Got A Way is only marginally better as it opts for a more choral/glee club arrangement which favors rich harmonies over layering and textures, but the aforementioned three songs have so little creativity to the arrangements that one wonders if perhaps they could have been sung from a lead sheet alone. (That would actually be kinda cool live ... a bunch of a cappella singers with perfect pitch, being handed a lead sheet and asked to perform on the basis of a melody line and chord chart ... hmmm ... but I digress ... ). Even Sandman's Papa Don't Preach doesn't escape my frustration for its lack of arrangement (particularly in the verses; the chorus has a little more to it), though by contrast, his Harder To Breathe uses its sparseness of arrangement to great effect (and Victor's killer solo doesn't hurt either).

I can accept an artistic vision that incorporates the technology available at the time as a partner in the creative process. But technology as a substitute for creativity is unacceptable and I worry that more and more, groups like the Dear Abbeys are leaning so heavily on the technology, that they've become concerned solely with how it sounds in the end and not how they got there.

Last time around, the BU Dear Abbeys got fairly shredded by my colleagues, making me unsure of what would await me on Abbeys Road. Any anxiety was unwarranted. Abbeys Road is a clean, smooth outing that certainly vaults the Dear Abbeys into the upper ranks of the male collegiate, if not quite to the front of the line.

So what got fixed? Typo-less liner notes boast a groovy pink and retro motif (although questionably lacking individual song copyright info). Energy is up, and tuning and blend are fairly tight (in large part due to a leap forward on the production front). And the Dear Abbeys streamline their effort on ten tracks rather than fourteen, making for a cohesive and focused (if sometimes monotonous) album.

So who gets the credit? The first should be an increasingly familiar name to you, mixman John Clark. Clark appears to be building quite the stable of groups out in Boston, and for good reason — his shiny-happy-people sound meshes really well with collegiate pop covers, the more textured and busy the better. The mix falters a bit on some of the simpler tracks (e.g., She's Got A Way, Ghost Train), but the Dear Abbeys' arrangers bear more of the blame than Clark for not holding the listener's attention.

Victor Sandman and Andrew Schwartz also deserve pats on the back, with each of them arranging five tracks here (half of the setlist). They seem to have varied it up a bit more from Not Too ShAbbey, but I still found most of the arrangements slightly repetitive and a bit over-reliant on "doo-ah" syllables. That being said, the arranging here largely gets the job done in providing a solid backing to the men at the lead microphone.

And what leads they are. Sandman wins an MVP award by turning in four (!) solos on the album with characteristic aplomb. Having enjoyed his work with Hyannis Sound, I had high hopes for Sandman's 'day job' and was mostly satisfied (he's always fun to listen to, the rest of some songs less so). The opener is probably the only Maroon 5 cover of the past year I can bear to listen to more than a couple of times, almost solely due to Sandman's ripping lead. Other highlights include Patrick Hopple wailing a convincing Styx on the BOCA-selected Renegade and ICCA-winner Rob Mezzanotte's dual piano man turn on Billy Joel and Ben Folds tunes. Good stuff here, I promise.

The Dear Abbeys are knocking on the door of excellence, and seem poised to barge on through with their next album. But Abbeys Road will more than tide you over until that happens.

To order this album visit A-cappella.com or the group's website.