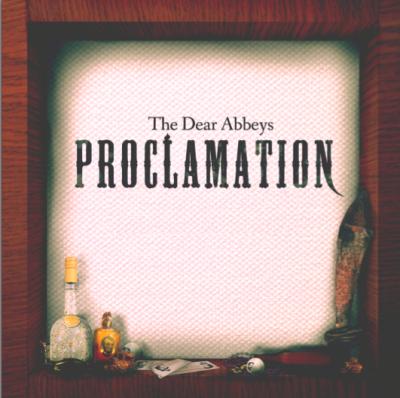 This offering by The Dear Abbeys isn't a bad album by any stretch of the imagination. There is not a truly bad song on the album. The production enhances the product effectively and there are some very nice moments. Yet there is nothing transcendent about what the group does here: Proclamation is a nice snapshot of where The Dear Abbeys have been the last couple of years, but not an album that will change the genre anytime soon.

What The Dear Abbeys are doing is good. Wake Up starts the album well ("Obama llama drama" notwithstanding), and Seven Nation Army has a nice groove that brings a smile to my face. I like that the group doesn't feel compelled to add percussion to everything. A Song For You, despite a few tuning issues, is a really effective smolder of a song, and I imagine the person the group is singing about would be quite touched by this expression of sentiment. Fire and Rain starts with a nice build into the song proper that sets the tone for the stark hopelessness I think James Taylor originally intended.

The group is hit-and-miss when it tackles songs that have historically female leads. S&M is a fun, driving romp that listeners will head nod to. Conversely, the live track Killing Me Softly has the potential to be a lot of fun, but the joking matter at the beginning took me out of the moment, and the hip-hop aspects of the chart didn't really fit the majority of what the song was. The liner notes are better than most, at points crediting both the original artist and the artist their version was based on. Would it have been that much more work to add composers? I'm sure The Dear Abbeys would be forgiven for the smaller font type in doing so.

I "proclaim" that people who don't buy a cappella on a regular basis would be quite pleased with this album and that the intended audience for the album, which I imagine is family, friends, and alumni, will be proud of the finished product here. Just don't buy the album looking for anything other than nicely rendered covers with a couple of high points and a couple of "could have been" moments.

Proclamation is the 20th anniversary album from Boston University's all-male group The Dear Abbeys. The album starts out strong: Wake Up is a solid first song with a lot of energy, and Seven Nation Army has an excellent groove (good choice for the group to go with Ben l'Oncle Soul's version of the White Stripes' hit, although someone misplaced the apostrophe for "l'Oncle" in the liner notes).

After this, though, the album loses focus. These guys have a ton of energy, but that sometimes works against them. They throw a lot of mash-ups into their pop covers (Cascada's Everytime We Touch in Poker Face, Justin Timberlake's Sexyback and Britney Spears' Till the World Ends in S&M — the latter of which is really distracting), which feels like a crutch for spicing up an arrangement and making it less repetitive. Killing Me Softly is a live track that is probably pretty fun to watch live, but it's just too chaotic to sound coherent on a recording. Slower songs lack dynamics: Lost and Fire and Rain both drag in moments that are supposed to soar.

Despite some problems with focus, the guys in The Dear Abbeys do one thing exceedingly well: their energy makes them sound like they enjoy singing — after all, this is a group that can make Earth, Wind & Fire's overplayed September sound fresh and fun. Also kudos to Dear Abbeys alum Min Cho for his arrangement of A Song For You, which is lovely.

One final note: The Dear Abbeys do a pretty good job with the liner notes, crediting both the original performer as well as the "as performed by" version that inspired the group's cover. That said, a little more attention to songwriters would be nice; Killing Me Softly was not originally performed by Roberta Flack — singer Lori Lieberman first recorded the song that was written by Charles Fox and Norman Gimbel.

A cappella often toes a dangerous line between the silly and the sublime; there is, after all, something profoundly goofy about imitating instruments with your voice. The best a cappella groups make you forget about this inherent silliness (unless, of course, levity is the intention) and overcome you with the power of the human voice. It's very rare that I think of the music of Rajaton, Cadence, or The House Jacks as being anything but uplifting and exciting.

The Dear Abbeys, on the other hand, are pretty damn silly. Don't believe me, dear reader? The group's cover of Arcade Fire's Wake Up (and indeed the album) begins with a rousing strain of "obama-lama-jama". It doesn't work with the song and it doesn't work with the album, and I was left scratching my head at its inclusion (and it's not the only instance of off-putting silliness; the album is loaded with strange little moments like this).

It is particularly off-putting because The Dear Abbey's have clearly put a lot of thought into this album; little else seems haphazard or thrown together. The production is gorgeous, with lots of attention put into creating sonic spaces appropriate for the individual songs, while still developing a cohesive group sound throughout the album. The group's blend is solid and the lower amount of pitch correction makes for a very aesthically pleasing sound.

The album also suffers from its song selection; this is thoroughly tread ground. Poker Face, Seven Nation Army, Killing Me Softly (the Fugees version, certainly), and Chicago have all been done to death, and there aren't enough interesting songs on the album to off-set this; the album's track list is fairly yawn-inducing to those constantly exposed to collegiate fare. Soloists are also spotty and inconsistent, often not standing up against the solid background vocals on the album.

Proclamation is far from a bad album, but it lacks the innovation and intention to stand up against the strongest albums in its field. The Dear Abbeys is a group comprised of strong singers with talented arrangers in their midst (there were some excellent moments in the soaring arrangement of James Taylor's Fire and Rain), and I believe this group has the potential to make an album that throws off a cappella cliche and rises to a higher level.

To order this album, visit the iTunes Store or send an email to mediadirector@dearabbeys.com.