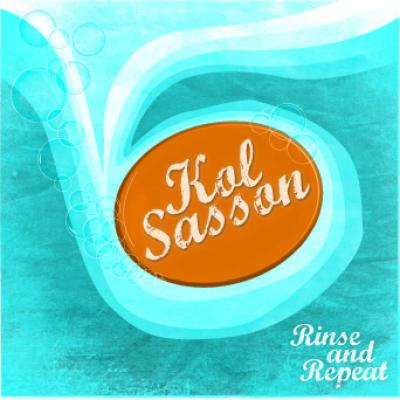 Kol Sasson's latest release, Rinse and Repeat, is a technically proficient but lifeless album. Featuring an odd mix of Hebrew and English tunes, it rarely rises above the level of background music.

As is standard these days, Rinse and Repeat is slick and professional, with dead-on tuning and blend and nary a note out of place. Yet the backing vocals on this album seem particularly phoned-in, reaching through a haze of digitization and automation that removes most emotion and life. Many arrangements have plenty of moving parts that tend to keep things interesting, but I never feel like I'm getting the full effect of sixteen people singing. As a result, Kol Sasson's efforts sound like most collegiate groups I review: decent but uncompelling.

It's clear the non-English tracks are king on Rinse and Repeat. The opener Emtza HaLayla BaKfar features a nice groove and interesting chord transitions. Im Lavan has a cool arrangement and nice emotion in the trading solos. I'm on the fence about Al Tidag, which is incredibly boring and repetitive, yet produces an interesting trancelike feeling. While Boee V'Shalom is a dud that manages to sound cheesy, poorly sung, and boring at the same time, Kayitz is a gem, even if it typifies the overprocessing that Rinse and Repeat suffers from.

The English tracks are almost all uniformly bad. It's a struggle to stay awake through tracks like Champagne High, The Everglow, Dreams, and Waiting on the World to Change: slow tempo, simplified and repetitive arrangements, lazy blocks, and mediocre soloists. The only two English tracks worth listening to are the up-tempo, slightly tongue-in-cheek Another Night, and Love Song, where Kol Sasson manages to hit a groove for a while and Daniela Murch gives one of the better solo performances on the album.

Rinse and Repeat is actually an apt title, as Kol Sasson's latest is only too typical of the albums college groups are making these days. It's got a few good tracks, even more non-good tracks, and a sound that's interchangeable with most groups out there.

Kol Sasson has upped the ante on production for their latest album Rinse and Repeat. The group's vocals have a bit more chutzpah this time around, aided by the warmer, broader, and more fully realized production provided by Liquid 5th. Most everything else has stayed about the same, but the noticeable increase in energy and production value does a lot to improve what once sounded average.

Interestingly the diversity of Kol Sasson's repertoire, a strength of their previous release U-Phonius, pops up here as a weakness. There's more English language material, which isn't as well executed as the tunes in Hebrew. The English repertoire is also terribly eclectic to the point of distraction. It's difficult to get into a mood listening to an album that has Dreams by The Cranberries followed by Call Me When You're Sober by Evanescence. In the case of Billy Joel Medley that closes the album, the song itself feel scattered, drawing songs from all points of Joel's career that don't seem to have a common theme or structure to tie them together. All in all, it's difficult to tell what kind of sound Kol Sasson was going for with their English music.

Though they may not hang together particularly well, the individual songs on this album are quite good. The group has a nice blend together, and the production choices that L5 has made really serve to enhance the quality of the group's sound. Kol Sasson has some good arranging talent, too. Several group members provide arrangements, which is always nice to see and generally bodes well for the group.

Perhaps it's a coincidence, but the better arrangements and performances are the ones in Hebrew. It's hard to put my finger on exactly why, but they sound like they have a bit more heart in them. Hebrew is a beautiful language to sing in, and this isn't the first time I've noted the disparity between songs sung in Hebrew and those sung in English on a collegiate album. Maybe it's because the language is more naturally expressive, or maybe the songs are just more meaningful. Either way it often seems to bring out the better performances in the groups I've heard.

Overall, this is a very good album, and one that builds nicely on the musical strengths of its predecessor. A little more attention to cohesiveness in English song selection and track order would go a long way toward a more enjoyable listening experience next time around.

Kol Sasson is an eighteen member University of Maryland group that sings in both English and Hebrew. Gazing at the track list of Rinse and Repeat, one could correctly guess that six of the fourteen songs on this album are indeed sung in Hebrew. The English and the Hebrew songs seem to be of about equal quality, although not speaking Hebrew myself, I obviously like the English ones better.

The album doesn't really contain anything groundbreaking or jaw-dropping, but there is a fair amount of well-done music. The arrangements all seem very typical of current collegiate a cappella: fairly standard solo parts, backing vocals, bass lines, and vocal percussion. The pieces all seem very "safe" to me, but are nicely tuned, nicely balanced, and for the most part have good soloists. In other words, the music is pleasant to listen to. Traditional harmonies abound, without complicated chords or modulations. This might be because Kol Sasson has done all of their own arranging.

Speaking of arrangements: two of them stand out, one in a positive way and one in a negative way. The positive one is Dreams. I have only heard all-female arrangements of this song before, and I quite like what arrangers Rachel Attner and Carolyn Muraskin do with this mixed version of the song: soprano and alto soloists doing a duet, enough variety in the bass line to prevent it from getting boring, a driving vocal percussion beat, and some bouncy inner parts. Unfortunately neither the soprano nor the alto soloist lifts the song up to where it is capable of going.

The bad egg of the arrangements is also by Rachel Attner. In Billy Joel Medley, the group tries to cram eight songs — counting the two reprises as separate songs — into 5:44. As might be expected, many of the songs end up seeming rushed, and for those with just one line of the song inserted into the medley I have to wonder "what is the point?" For the record, the medley consists of The Stranger, Just the Way You Are, In the Middle of the Night, Goodnight My Angel, Movin' Out, Only the Good Die Young, Goodnight My Angel (reprise), and The Stranger (reprise). It's almost sad to me that some bits of the medley are really good, like the whistled part of The Stranger and the very short In the Middle of the Night, because they could probably be turned into worthwhile tracks if they were able to stand on their own. I'm left wondering what might have been. The way that each section of the medley has a different soloist would make it fun at a live concert, but it really has no place on an album. And it is especially odd in its position as the final track.

To conclude this review, Kol Sasson certainly doesn't do anything to embarrass themselves with this album. I suspect all of their fans will enjoy it. But I can't give the album more than a lukewarm recommendation to the a cappella community in general.