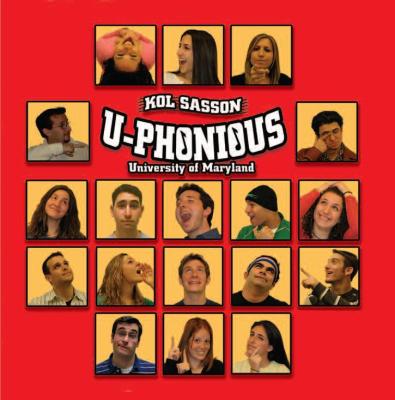 Kol Sasson contends that it is the University of Maryland's premier Jewish a cappella group, but based on U-Phonious the group seems to be shunning its niche a bit given that only six of the album's thirteen tracks have any Jewish/Israeli/Hebrew connection. Unfortunately for Kol Sasson, it doesn't seem to matter whether the material is standard pop/rock a cappella fare or Jewish repertoire — the finished product is thoroughly unremarkable.

Unquestionably, the album's most pervasive and bothersome weaknesses are the plodding, unimaginative arrangements; a thorough lack of energetic singing (especially from the women); and heavy-handed production on the VP that consistently overwhelms the blend and threatens to obliterate what little texture is being created by the background voices.

Indeed, while individual examples of those three criticisms are rampant throughout the album, it's the consistent combination of all three, on almost every track, that really dooms this effort to mediocrity. Start with an arrangement so painfully vertical that it produces gaping holes after each two or four-bar rhythmic phrase as the entire ensemble stops for a breath. That, or perhaps begin with the upper voices singing a run-of-the-mill chordal "ooh-ahh" while the lower voices cover every quarter and/or eighth note imaginable. There is virtually no layering of voices, no syncopation, no rhythmic phrases that aren't slaves to the bar line, so the foundation is weak from the get-go.

Now there's not a whole helluva lot that will salvage a sub-par arrangement, but a lack of energetic singing is certainly going to make matters worse. The background guys fare a bit better with their driving rhythmic parts, though their performance still sounds mechanical at best. The ladies — who in their defense are outnumbered by the guys — often sound flat-out disinterested and the production does them no favors with its bottom-heavy sound, dominated by the aforementioned VP. It's not that the VP is poor — it may even be the best individual element on the album — but its dominance over everything else on every track and its sameness of sound from track to track make it more of a hindrance than a help.

Those who have read my reviews of Jewish groups in the past know that I often focus on issues that might go unnoticed by other reviewers who may be unfamiliar with the source material. Disappointingly for me, my problems with this album make those sorts of notes somewhat secondary, but I would be remiss if I didn't point out just one or two: kudos to the group for trying something different with Acheinu. I personally didn't care for the hip-hop groove, but it was a bright spot of creativity and inventiveness that should not go unnoticed. That said, I would have preferred that the group do just the least bit homework rather than listing the song as "Traditional". For the record, the song was written and first performed by a very well-known and prolific Jewish songwriter named Abie Rotenberg and the words aren't so much traditional as liturgical, taken from the morning prayer service on Mondays and Thursdays. Also, the novelty of the group's inventive approach to Acheinu was mitigated a bit when that same hip-hop groove showed up on the very next track, Darkeinu, for which it once again seemed to be out of place as well.

Jewish a cappella is as strong as it's ever been on college campuses these days, much to my delight. But at least right now, you won't yet see proof of that from Kol Sasson — if you're in the market, stick with Six13's Encore, Tufts Shir Appeal's Zoozin' or the BOJAC (Best of Jewish A Cappella) compilation from 2006.

U-Phonius is the third release from Kol Sasson, the self-proclaimed "premier Jewish a cappella group" of the University of Maryland. It's a fairly solid release featuring a mix of American and Israeli songs.

U-Phonius is a typical example of the shiny, slick sound that has come to exemplify collegiate a cappella in recent years. Musically there is nothing blatantly wrong, with parts sounding in-tune and any mistakes expertly edited out. While the mix occasionally feels a little narrow and lifeless, I enjoyed how full and well rounded the bass remained throughout. Soloists sound decent but feel electronically glammed. While I did enjoy the large number of duets, the blend on the duets was typically distracting. Arrangements are simple and appropriate, but lack momentum as they typically consist of eight measures of verse and eight measures of chorus that are then repeated for several minutes. The end result is an album full of tracks that (excluding some of the non-English repertoire) could be on any number of recent releases.

I'd like to use Carry On My Wayward Son to illustrate. This track sounds like the "High School Musical" version of Kansas, poppy and bright. I can just imagine the group performing in coordinated pastels and huge grins. The original has been boiled down to an oversimplified arrangement that doesn't push the song (and has some just plain wrong transcription in places) and ignores what could have been some interesting guitar solo breaks. The soloist sounds washed out and just a little bit cheesy. The chorus features a harmonist who is louder than the soloist. These elements synergize to form a bland and anonymous track that sounds just like a million others.

Some of the strongest tracks were the non-English offerings. The more traditional Acheinu grooves well, and is followed by my favorite track, the harmonically lush Darkeinu. The album opener Holding Out for a Hero was also strong, with one of the more interesting arrangements and some great energy from soloist Rachel Moritz.

Kol Sasson did a solid job on U-Phonius, and they have a right to be proud of their efforts. Perhaps it's unfortunate that the bar is now set so high that a release of this quality is delegated to "yearbook album" status, but unless you are in some way connected to the group there's no compelling reason to check U-Phonius.

Pretty cool new album from Kol Sasson, the University of Maryland's premier Jewish a cappella group. On first listen I was impressed, if not blown away, by this group's sound. Subsequent listens, however, brought to light a few neat things about this recording that I wound up enjoying quite a bit.

First of all, Kol Sasson covers a large range of material on this album, yet it still holds together well as a cohesive whole. Pop, electronica, classic rock, and Israeli pop-rock stand side by side and flow pretty seamlessly into one another over the course of thirteen tracks. As simple a feat as it may sound, such a broad spectrum of material can often be a group's downfall. I'm glad to say that I think it's one of Kol Sasson's greatest strengths.

It took me some time to figure out why things held together so well for me. Unfortunately, I can't say that it's the group's energy. It's all right at the start, but I wanted much more as the album went on. I also can't really point to any stellar solo talent that kept me on the edge of my seat, as soloists range from okay to good with no one really bringing down the house.

I think the MVP ought to go to Jeff Thacher as producer. He keeps things bouncing with creative, gritty drum sounds way up front, and with a nice treatment of the background vocals, giving them presence without making things overbearing. I'd also credit arranging as a plus, which the liner notes suggest tends to be a group effort. It's nothing revolutionary, simply effective and consistent from song to song in a way that ties things together nicely.

So, nice work, gang. I like your music, and I think you're headed in the right direction. If I have any overall criticism, it's that things sound a little safe in terms of spirit and creativity. I enjoyed the variety in genre, but next time I'd like to see it hold together with a more energetic approach to the sound.