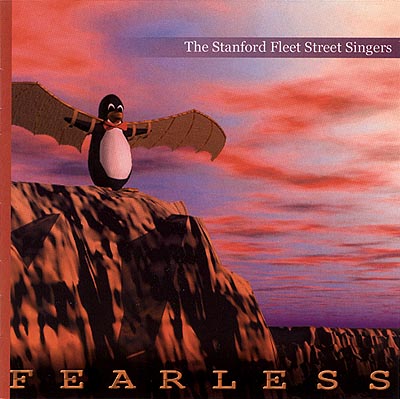 Why? Fabulous and well-chosen opener. Strong follow-up, including original material. Standout solo voices that work with, not against, their formal training. Tight, tight chords and tuning. Novelty numbers that are actually funny, or would at least be funny in a live setting.

The Fleet Street guys are geeks — always have been, likely will continue to be so. The penguin, the tuxedos, the red bow-ties that play up the pencil-necked schtick. They know it, they play up to it, and they will charm your socks off. As a result, they seem much cooler than that, maybe much cooler than you are. Of course, it helps that they are damn good at what they do.

And they keep their hidden tracks really, really short. (Cf: 1994's Short Song, so cute and so well-hidden that it didn't even make it into our review of What You Want.)

Final Frontier is possibly the best song of the year. Great solo, good arrangement, and forgivably overdone production. The parody medley that follows is one of the best of its kind — the most annoying pop songs since Mmm-Bop! sung in madrigal fashion. It's collegiate a cappella's answer to PDQ Bach.

This disc shows remarkable scope — respectable soft rock is supplemented by top-notch and satisfyingly distinct glee club and jazz numbers, with the odd choral showcase thrown in. The jazz is lovely, showcasing the arranging talent of the inestimable John Niekrasz, who also arranged Final Frontier. Niekrasz does Puerling up proud with his interpretation of Georgia on My Mind, with due credit to the group for singing it properly. The arranger also gives nice treatment and lovely original words to Dave Brubeck's Strange Meadow Lark, in the best tradition of jazz giants Vox One.

Buy it. You'll like it, even if you're not into geeks.

The Fleet Street Singers are a bunch of lovable, creative, musical dorks. This is no collection of boy-band wannabes. With a set list including Zip-a-dee-doo-dah (and its evil alternate-universe minor version), Greatest Hits of the 1590s (Did Bach really like big butts? And was this something he could not lie about?), a Schoolhouse Rock medley, and even the little-known theme from Revenge of the Nerds, is there any wonder that Fleet Street's formula reads: Music + Fun = Cool?

When not goofing around, Fleet Street has a Swingle Singer bent. Tracks like Strange Meadow Lark, Georgia On My Mind, and Loch Lomond show Fleet Street's attention to phrasing and complex harmonies. Jazz enthusiasts will enjoy.

Other than the hidden track, which is a waste of even wasted disc space, Fleet Street falls a little short on editing. Their songs are often tongue-in-cheek, but the jokes get old kinda quick. With minds as creative as these, Fleet Street shouldn't have too much trouble getting a greater humor density.

Here's an example of when Fleet Street hits the humor nail on the head. It's the bridge from Flashdance. And it's hysterical:

(For the right ear you'll have to buy the CD.)

The intonation on Fearless, like many current releases, is completely devoid of all human intonation flaws. It's the blessing of Autotune. Hallelujah. The danger comes in overtuning or sloppy Autotuning. When the chords get dense (Strong Meadow Lark, for example), the perfect intonation makes the voices sound artificial. While a robotic sound can be a great effect (Cher's Believe), its not very effective when used unintentionally.

Then there's the warbling problem. Autotune forces the singers' pitches to the closest scalar pitch. To be effective, the singer must be closer to the right pitch than to any other. While this seems easy enough, vibratos and other warbles can actually bring a singer's pitch closer to the wrong pitches. The resulting sound can be heard at the opening of Flashdance. It isn't a human pitch error, but it sure sounds artificial and wrong.

That aside, Fleet Street is light, silly, and musical. If they pack the laughs in a little tighter, they'll have a great release. As it is, Fearless rests comfortably between average and good.

Fearless is an album which sounds as if it were not only sung, but also produced, conceived, thought of, and breathed by guys. Not boys, not men, certainly not women — Fearless is by and for guys. Some indicative signs: many of the songs are the sort of things a guy would think sounds cool, or at least funny, simply because sung by a bunch of other guys. Think Greatest Hits of the 1590s, Devil Woman, Revenge of the Nerds (both of which include spoken-word intros complete with funny voices), and Flashdance. Further, each member of the group is graced with, and referred to in the notes by, a cute nickname. None of this is to say that the group lacks style or cleverness, both musically (a bass sings "Here's the breakdown" in Fearless) and culturally (one nickname is "Danger" Will Robinson, another "Nosferatu" Lugo, nodding to Mr. Lugosi, and Schoolhouse Rock has a nice reference to an obscure Saturday-morning civics lesson from the late '80s). But the disc does lack maturity.

This is most evident in the soloists. While the backings are generally nice and the harmony generally smooth, the leads are at times just out of their emotional depth. This is sometimes compounded by backing lyrics which aim for interesting but verge into absurd (basses singing an eight-note "run run run run" in Falls Apart). The overall effect is fun, but in general a bit too jocular for some of the song choices. The guys can emote appropriately (witness a striking Strange Meadow Lark), but do not do so consistently.

It is due to this inconsistency that while some songs are standouts, and most competently done, the album as a whole seems to miss something. Next year, perhaps, Fleet Street will hit an emotional age and stride to match their already-apparent musical acumen.

CDs are $18 each, including shipping. Albums will be sent Priority Mail and should arrive within three days of processing. Send checks or money orders to: