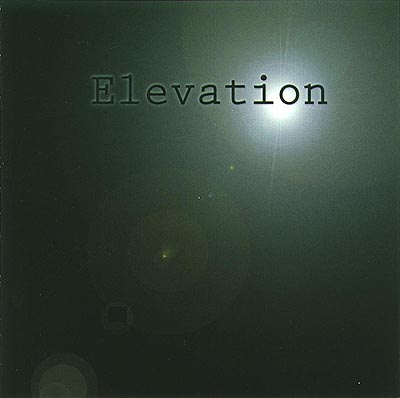 Elevation in a nutshell: powerhouse solos. These boys can sing! Every last one of them. But the group only sounds truly locked on the glee club numbers, and the album also is fighting a serious pretension bias. It's not as bad as it first seems, but it wastes too much energy climbing out of that hole.

Pretension overload number one: shadowy, unidentified pictures of group members that make you squint to pick the faces out, accompanied by Star-Wars-style fadeaway text and a paean to the brilliance of their new concept album. A new album from a group with a longstanding tradition. One that "represents the innovation and creativity this group strove for" and "epitomizes the essence of their goal for the future". Whatever.

Pretension overload number two: opening with Bohemian Rhapsody. Their version isn't bad, but neither is it God's gift to collegiate a cappella. And opening with a challenging, demanding, lengthy concept piece is not necessarily the way to sell your rock/pop cover album.

Behind all this, The Clef Hangers have put together a pretty amazing group of covers, split between straight-up, legitimately performed hip-hop and soft rock, with a few ringers thrown in. (If I were gonna arrange a glee club number from scratch and throw it in the middle of my radio cover album, it would not be a classical version of Amazing Grace. But they didn't ask me.)

Oh, but there is some lovely work on this album. Scott Rudicil is fabulous. From his Bono-esque treatment of It Ain't Over Till It's Over to his gorgeous Sting interpretations, he is a voice to be reckoned with. The rest of the bunch ain't bad either. Craig Warner does a great job with Steal My Kisses. Kevin Massey has a really lovely classical tenor sound on Amazing Grace. Brendan Ernst has a nice way with Crazy Love. And the Return of the Mack duo of Brittain Cherry and Cameron Russell does a great job with that and with Faded. The hip-hop on this album is possibly the best I've heard coming from a college group. It might have been edgy to lead with one of those, but I think they could have, and should have, gone in that direction.

A few gripes: The album feels a bit medley-heavy. And why did they feel the need to change the basic riff on Steal My Kisses? It's such a good song precisely because of its simplicity. They have a good solo and a good groove, and they should have left well enough alone.

But it's a good album. Really it is. You should buy one, so you can listen to these boys sing.

The UNC Clef Hangers deserve better than this. They sound like a pretty talented group of young men, and they are noteworthy for having so many strong soloists. But their new CD Elevation hardly presents them in the best possible light. The Clef Hangers are clearly trying to go the distance and make an album that's really well recorded. Unfortunately, what they end up with often sounds like a rough mix.

Not that The Clef Hangers' performances and arrangements are beyond reproach. For example, there's nothing any engineer could have done to save their version of Bohemian Rhapsody, a song they foolishly decided to open the album with. It's a bad idea for a cover since the goofy mock operatic vocals of the original only work because they had those wailing guitar parts to play off of. Singing the parts that ought to ROCK in an overly trained and choral style doesn't help.

The highlights on Elevation all come from the soloists. Amazing Grace seems like a fairly typical and uneventful affair until the arrangers cleverly split the lead among three soloists, including (yay!) a bass. There isn't a weak link in the bunch. The same can be said of the soloists album-wide.

These guys take the songs to heart and make them their own. Even when they're visiting material that they themselves have done before (like Moondance), the soloists keep it fresh by singing the songs like they own them.

I have to call attention to their cover of Endless Night from the Broadway musical (not the movie) The Lion King. They mess up at the end of the song by introducing a percussion line. It's a cool sound, but it's a little sloppy. Besides, it doesn't work with the rest of the arrangement. Also, the song is supposed to shift gears at the end and become majestic and triumphant. While The Clef Hangers do some interesting things with the song, they never reach that emotional high. But overall, the performance is so rich and full, who cares about any of that other stuff? Not me! And probably not you, either when you hear the buzzing bass lines or the great solo by Kevin Massey (who also arranged it).

On an unrelated note: I have to say that Massey sounds like Dennis DeYoung (and for all of you who weren't raised on Kilroy Was Here and Paradise Theater, I mean that in the best possible way). If Massey hadn't graduated, I'd start a petition to have The Clef Hangers record an album of nothing but Styx covers.

On their latest release, Elevation, The Clef Hangers of UNC cover all the modern a cappella bases, and well. The tuning and blend are way above the college norm. The sound is clear and well-balanced. Every soloist has what it takes.

So many moments on Elevation made me smile. I hear a lot of all-guy college groups, but I don't hear a lot of truly sexy solos, like those delivered by Brittain Cherry and Brendan Ernst on Faded and Crazy Love 2001. I loved the dynamic unity on Father Figure and Endless Night. The clip of Smooth Criminal tucked into Billie Jean is a virtual clinic in smooth and appropriate quoting. The almost-classical purity of And So It Goes reveals the exquisite simplicity of this frequently abused tune.

So why all those 4s in the category scores, and not 5s? Because in every category, The Clef Hangers do just enough to remind the listener that they are human, and young humans at that. Sometimes the energy isn't up to the song's demands (Bohemian Rhapsody). Sometimes the tuning goes sour at the wrong moment (The Police Medley). Sometimes the song choices are forgettable and waste the group's talents (Can't Take My Eyes Off You; A Groovy Kind of Love).

But the straight 4s I gave Elevation on every attribute are much higher praise than the mix of 5s and 3s many CDs merit, especially considering that two lineups contributed to Elevation's set list. Non-singers may not realize just how much sweat goes into producing a consistent album under these circumstances, but a cappella veterans will join me in applauding The Clef Hangers' achievement.

Due to the familiarity of much of the set list, a cappella diehards can probably live without Elevation. But it's well worth the price to any fan whose collection isn't already crowded with these covers.

CDs are available through Mainely A Cappella and from The Clefhangers themselves.