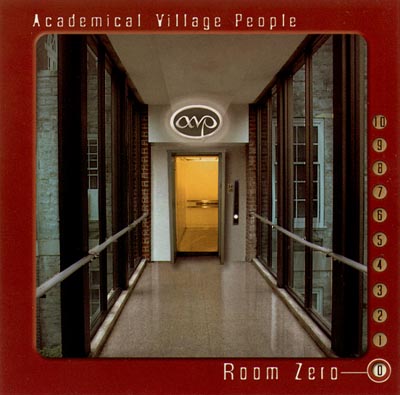 If I gave out such things, I would give The Academical Village People "props" for their blend, for their enjoyable energy, and above all for their daring — not very many a cappella groups try country, and of those that do...

Room Zero is a great album. Right off the bat, these temporary Virginians get things rolling with a spot-on rendition of Bye Bye Bye (showcasing the solid studio work evident throughout). After that, although the tempo changes, the pace hardly slackens. Especially good are the startling, countertenoric lead on I Want You Back and the sincerity of Waste. Like a lot of other guy groups, The AVP are funny, but they show that they can mean what they say, too. Also consistently good is the percussion.

The group hardly ever goes wrong. A couple of letdowns do mar the album, such as Diamonds and Don't Tell Me (where the obvious comparison with Rockapella is to the group's credit...unlike Sean Leonard, AVP's Warren, Clark and Daguiso all have good crisp consonants). But these tracks do little to detract from the excellence of this album.

Room Zero sounds great, and in fact the original Room Zero sounds like a nice place. They describe the original Room Zero as an acoustically rich skyway connecting two buildings on their campus, where the group members go to unwind and indulge themselves in their own echoes. Reading this in the liner notes while listening to the album reminded me what collegiate a cappella is all about.

AVP has gone from one extreme to the other since I reviewed their last project, Gracias, Por Favor. The guys of AVP are going to hate me for this, but I really feel like they've still failed to find an equal balance between performance and production in studio. Their past effort was all performance...this one is all production.

They've lost that edge that they had on Gracias, Por Favor. They've lost the energy and the excitement that made that project very memorable for me. I scored their last project a little lower than it deserved based on the assumption that if they were to add production into the equation, they would achieve their lofty goals and release a top-notch product. I could never have anticipated this off-balance swing in the other direction.

Having said that, this isn't anywhere near what I would call an awful project. The sound is quite good on most tracks, and they do manage to find their energy in spots. Songs like Sold and Waste do a nice job of capturing the group's emotional extremes, and songs like It Wasn't Me leave the listener thinking that there isn't any song that these guys can't do well.

Some individual highlights on this album: Chris Schenkkan's lead on Waste, and Mark Manley's arrangement of Promise. I also enjoyed Michael W. "Smitty" Smith's solo and arrangement of Raspberry Beret.

It was refreshing to hear some country standards show up on this project. Country music is a genre that hasn't been that widely tapped by collegiate a cappella. There is a lot of good music out there in the country realm that would be great in an a cappella setting. I wish more groups would take notice.

Overall, another good effort, just still far short of what these guys are capable of giving the a cappella world. I scored this album higher than their last project, but that doesn't mean that I enjoyed this one more. AVP needs to combine their last two albums to make a project that will stand out in the crowd of collegiate a cappella.

The Academical Village People have the questionable distinction of being the first group for whom I've reviewed two albums. I was really pleased to get Room Zero in the mail, as I loved Gracias, Por Favor.

In Room Zero I found a good solid album of well-constructed arrangements sung by good voices and AVP's usual level of ease and enthusiasm. However, I did miss that quirky sense of humour that filtered through the last album. Apparently, The AVP are now taking themselves a bit more seriously...which I consider to be a bit disappointing. However, they did have a postscript of bizarre singing on the end of the last track, which did redeem them a little!

There are some really great tracks on this album. Fields of Gold is just beautiful, with a lovely, whispery solo. Michael Daguiso is to be highly commended for doing such a great job on the lead vocals on I Want You Back. I read this one in the track listing with a certain amount of trepidation, as the Jackson 5 are a pretty tough act to follow, but AVP really got it together on this one.

I found a couple of tracks with some internal synchronization problems, most noticeably the opening track, Bye Bye Bye, which also has a bit of a tempo problem, and sounds a little laboured. The irony of this song being by 'N-Sync was not lost on me! Promise had similar issues, and I found the backing in the chorus to be too noisy, which really detracted from the musicality. I could hear the effect that AVP were after, but they didn't quite hit it here.

The other song that didn't score so well with me was Raspberry Beret, but to be honest, I really hate Prince (and this song the most of all his material), so I'm probably a little biased here.

The rest of the material was pretty good...a few songs that I could take or leave, neither exciting nor stinkers. Just when I thought this album was going to be a 4 across the board, I struck the last three tracks. Winners all three! They do a really nice job with Ladysmith Black Mambazo's backing on Diamonds on the Soles of Her Shoes.

Hmmm, so the final word on this album. It's not a great album, but it is very good...would make a fine addition to any collection.