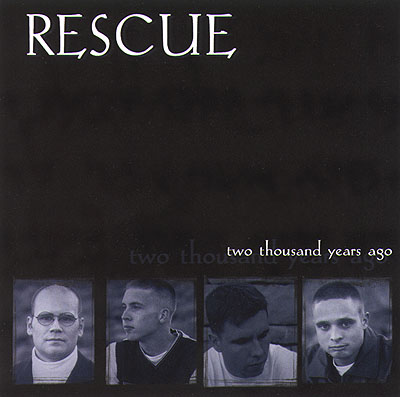 Rescue's new, full length CD Two Thousand Years Ago follows in the footsteps of Rescue's self-titled EP. So rest assured, you can expect more of the same: strong song writing, elegant production values, and pristine arrangements that are as beautiful as they are pure.

But you can also expect a few extras this time around. The group has added some vocal percussion to the mix on some cuts, but fear not — they still know how to piece together a rhythmic arrangement without using VP as a crutch. You should also expect improved vocals. The men of Rescue sounded just fine on their last outing, but they sound even more confident this time around. You can also expect more Jesus on the new CD. The first EP was decidedly spiritual, but Two Thousand Years Ago seems to be even more tightly focused on their faith in Jesus.

I've always hated the sort of preachy lyrics — feed the world, love is good, hate is bad — you know, the kind of treacle you expect to hear on a benefit album. Lyrics like that are as poorly written as they are obvious. Rescue's album is full of preachy lyrics, but of a much different variety. These lyrics are rightfully preachy. After all, preaching is what they are all about! I think anyone who has ever written a sappy and trite lyric, should listen to Two Thousand Years Ago so they can learn that just because your song is preachy doesn't mean that your lyrics have to be dull. Rescue's lyrics are not only well crafted, but they contain little surprises lurking around the corner. (And getting you to look at the world around you in a new way is one of the best things a song can do.)

I only have three complaints. First, the quirky opening track isn't up to the standards of the rest of the disc and might have faired better if it weren't starting the album. (Fortunately the second song — also the title track — is more than able to pick up the slack. It's bound to be a considered a classic within the contemporary Christian music community.) Second, the intro to Quiet Quiet — which is supposed to be the sounds of the everyday world that may distract you from the Word of the Lord — doesn't work dramatically. It doesn't build to enough of a din. It's basically traffic. Rescue could learn a lot about pulling of tricks like this by listening to Pink Floyd's The Wall, (an album that has crescendos that suddenly become tranquil down to a science). Lastly, the hidden track (which is thankfully not tacked onto the last real song and not buffered by too much silence), is out of place. It's a bit of between-song banter taken from a live performance. It's funny to a point, but the last joke is an awful and ancient pun that falls flat. And if that weren't anticlimactic enough, it leaves you waiting for them to break into song. They don't. That kind of flat out humor is out of place on an album like this. Not that there's anything wrong with having a sense of humor and being religious at the same time (or even having a sense of humor about religion), but this album is so serious and the production is so polished that a chatty live cut like that only serves to interrupt the flow.

If you believe in Jesus, even a little bit, buy this album now. And pick up their EP while you're at it.

This may be somewhat different for a review...I'm going to tell you HOW to listen to this. Not that there's anything wrong with the way the CD is ordered track-wise...just that on a CD of this genre (namely, Christian a cappella), it tends to be rather easy to pigeon hole the artist by the music without allowing yourself to know who the artist is...so here comes the instruction...ready?

OK, now I'll tell you why. There is, as in EVERY OTHER RECORDING WE REVIEW (oy), a hidden track at the end, heretofore known as the Live Introduction. Not that it's ground-breaking or earth-shattering, but it places a human personality and voice behind the group.

Why would I do such a thing? For those of you out there who are absolute fans of this type of music, there will be ABSOLUTELY NO PROBLEM. Right from the start with Paint Me a Picture, it was wonderful to hear ten tracks amongst which there is but one cover. Rescue's arrangements were fantastic as each track was efficiently thorough, even using silent moments to drive the track.

For those of you out there who are absolutely NOT fans of this type...you may as well move on. Close minded individuals looking for the occasional secular release would only appreciate the live introduction.

However, if your willing to listen to ten completely Christian tunes, with a refreshing sparseness of post production (four voices, and it stays pretty close to that through each track), you will be appreciative of ten musically different themes. Think of this as an up and coming version of the group GLAD. (Hint for the Christian a cappella impaired: They're good too!)

It took me a really long time to review this album. My main area of concern would be its religious direction. Quite frankly, I'm scared of religion. That makes it difficult for me to really sit down and listen carefully to a Christian album. I mean, I own a copies of The Preacher's Wife and Sister Act 2: Back in the Habit (Lauryn Hill pre-Miseducation), but gospel music of the African American tradition is so different from regular Christian music. It's raucous, joyful, thrilling. Whereas listening to Two Thousand Years Ago made me feel timid, somber, and scared. Sorry.

Aside from my personal issues, this is really a great album. The production quality, tuning, and arrangements are really quite excellent. The bass is appropriately full and pumping, the upper voicings vary from song to song so as to keep the texturing of each song varied. Additionally, every single song on this CD was written by and arranged by members of Rescue. In terms of technical criteria, Two Thousand Years Ago hits the spot.

My favorites are the rhythmic The Way, the Truth, the Life, gorgeous God's Eyes, and pop-esque The Only One. Funnily enough, they're all sequenced next to each other.

However, I do find that the soloists don't excel when pulled out of the backup context. Since this is a religious album, I'd expect the music to inspire in me a feeling of reverence, awe, and love. The soloists, in particular, should have drawn me in by displaying loads of emotion and sincerity. It didn't and they didn't. Don't get me wrong, the music is beautiful, but oftentimes I felt kinda....I dunno....depressed? In addition, the tempo of the album is rather slow and plodding. Haunting, yes, but difficult to listen to more than once in a row.

I believe that Rescue should, will (and probably does) have a legion of loyal fans. They have undeniable talent, both as singers and songwriters. I can only hope that in their next album, these guys will open up a little more as soloists and mix up the pacing of their song selection to include some more uptempo songs.

Rescue has put together one of the best albums that I have ever heard in Two Thousand Years Ago. I've listened to it over and over again trying to find something that they could have improved on, but there isn't anything.

Their sound is amazing! These guys obviously know not only their own strengths, but the strengths of the rest of the group, too. They combine together to create a rich, smooth sound that is unwavering throughout the entire disc. While the production in the studio certainly helps fill them out, the sound is still entirely their own. Each chord is impeccably tuned and the rhythms are precise and always together.

The arrangements on this album are also very impressive. When you really listen to them, you can hear complex chords and progressions. The rhythmic differences between the parts makes this group sound like more performers than just the four in the group. The best part about the arrangements, though, is that this group performs them and makes them sound easy. This is both a compliment to the group and the arranger, Jason Overstreet, for making this some of the finest a cappella music around.

The only deterrent that hit me when I first received Two Thousand Years Ago is that it is a religious album. Please do not fall into this same prejudice. The music here can impress everyone while putting a smile on their face at the same time. It would be a shame for anyone to miss out on this great example of what good a cappella can sound like. This is a must have.

I hope Rescue got the 5000-album deal at the CD printers instead of the 2000, because they're going to sell every single one.

Rescue is the real deal, and my money is on them becoming nothing less than wildly popular in the Christian music community, and maybe beyond.

All the good things from their first self-titled EP stand out, including absolutely outstanding production, impeccable blend, and songs both moving and catchy.

Arranger, writer, producer Jason Overstreet's name is all over this album, and he's a talent to reckon with. This is Rescue's first full-length album. Whether or not I review their next one for RARB, I'm buying it.

With a super-slick web site and first-rate press materials, Rescue has all the ingredients for independent music success. I wish them the best — groups of this quality deserve it.

Order through the Rescue web site or by mailing $15 plus $4 S&H to: