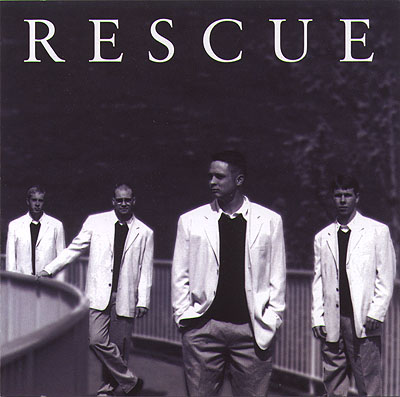 A Jew like myself doesn't particularly enjoy listening to Christmas albums for days on end in preparation of writing a RARB review. So, you can well imagine how cranky I was at the thought of having to review not one but two albums by Rescue, an honest to goodness Christian a cappella group. These aren't songs about Santa, they're songs about Jesus. Oy vay.

Keep that in mind when I tell you that Rescue's self titled CD is outstanding. It's just four voices singing simple arrangements. What's so special about that? It's the deftness of the arrangements. The songs are beautifully crafted and impeccably timed. And most of the album is original material that — brace yourself — hits the mark dead on every time. If there were a secular pro group out there doing what Rescue does, I'd be a happy man.

The standout tracks include I Will Rise, a winner from the first measure that reaches sublime heights when it hits its delicately cascading bridge. Rescue, a song worth naming your group after, is proof of that restraint and control.

There are only two troubled tracks on this CD. By His Hand is too wholesome and hokey. I keep visualizing old men singing at a church meeting in the early 1950s. The men of Rescue aren't belters. They're not likely to be heard screaming to the rafters at a Baptist revival any time soon. Normally, that isn't a problem for them. They get by on their straightforward brand of singing. But By His Hand tries to be a bit more rollicking than their other songs, and that makes Rescue sound somewhat stiff. The other track that bothered me was Kum-Bah-Jah. The problem with that cut is that it's too damn good. It actually takes a tired, laughable song and makes it sound alive again. It's an actually rousing number. But, since it's only a short snippet (53 seconds!) it leaves you wanting more, and not in the good way. It leaves you wanting more in the I-just-paid-$150-bucks-for-ringside-seats-and-the-champ-knocked-him-out-in-12-seconds way. They've got a good idea of what to do with Kum-Bah-Jah. It's a shame they don't run with it.

Bottom line, if you believe in Jesus, even just a little bit, this CD is a must-buy.

Beginning with a very earnest rendition of the classic Amazing Grace, the four-man group Rescue has established themselves as knocking at the door of contemporary Christian a cappella music. With a sound very reminiscent of the group A CAPPELLA, these four have put together a very solid, though sadly very short, collection of tracks. In fact, it almost feels much like an EP in length, as there is only 18 minutes worth of music.

Don't get me wrong, most of the 18 minutes is original material that is well-conceived, orchestrated and arranged. The lyrics are clear and follow the musical patterns they're sung to. There isn't any extraneous material to overly showcase a single member or particular vocal gymnastics. In fact, I got the feeling that the group had been around long before this first recording was put together, as the enunciation was very precise, with little noise to distract from the message, which is not sugar coated. So, if you are one that is particularly touchy about religious matter, this may not be for you. Likewise, if you are concerned about paying the $10 + S/H, you may want to consider waiting for RARB's review of their second recording.

However, I do have to say that there are a LOT of worse things you could spend that $10 on. My ultimate suggestion, if you can, find out where they're performing, and purchase it at their performances. To paraphrase, God looked down upon Rescue and said "This is good". (I'm shaky on my biblical paraphrases, but you get the point.)

A blissfully short album. Or EP, I guess. I'm not saying the album isn't good, it's just that I've reviewed so many 20+ track albums that my head is practically spinning. In fact, I believe my next review is another 20+ track album. sigh

Rescue opens with a pretty standard rendition of Amazing Grace. It's got some nice choral moments, but for the most part, I've heard it done this way before, guys. Ditto with Kum-Bah-Jah.

Otherwise, many of the songs on this album are written by members of Rescue, and these songs, being original, are much more enjoyable to listen to, since they don't have to be held against the catalog of previously recorded music. Obey Him, displays song-writer/member Jason McKenny's impressive melodic skills, smoothly transitioning between a happy-go-lucky Caribbean feel in the verses to a more serious and choral bridge. The eponymous title track, Rescue, written and arranged by group member Chad Krober, has a lovely, melancholy feel to it. The four members or Rescue display an endearing earnestness in I Will Rise that I can appreciate, but their wannabe-soul styled By His Hand falls pretty flat. The arrangement style is not particularly innovative, but I guess that's okay, since we're not exactly talking about alternative rock music here.

My biggest problem with Rescue is that while the ensemble singing and production quality of Rescue fare passably well, the soloists on this album are altogether lacking. And for me, the solo can really make or break a song. These guys are all musical — they don't make me wince — but their voices are not mature or developed enough to blow me away.

There are obviously qualities I like about this record: the original tunes, the heartfelt earnestness of the singing, etc. However, I feel that Rescue lacks a comprehensive originality in style and performance that would make this album truly good, or even excellent. Therefore, I'm left with a very arbitrary feeling about this whole album. Maybe next time, guys!

So many times it has been written by the reviewers of RARB: quality is better than quantity. Finally, here is an example of a group who took that valuable advice.

Rescue, the debut album from the gospel a cappella group of the same name, has just seven tracks. Only four of them are full length songs. The other three feeling more like interludes. So, it is a quick listen. But, my oh my, what you do hear is quite good. And this brings me to my second point. I am continually amazed by the number of new a cappella groups that pop up, seemingly out of nowhere, and deliver outstanding debut recordings. It is a testament to the growth of the entire a cappella scene that this is happening with more regularity and relatively decreasing fanfare.

So, it is happening again. Rescue has made a fantastic first album. These guys are tight, with plenty of lush blend. I challenge anyone to find a single tuning problem on this entire album. Every song is expertly arranged by one of the four members of Rescue, but usually by one Jason Overstreet. Three of the full length tracks are originals, and each is written by a different member of Rescue. These guys are clearly bursting with talent. Expect more of the same on their second recording, Two Thousand Years Ago. I imagine they'll pick up where they left off.

Style wise, aside from obviously being gospel in content, it is hard to pin these guys down. Soft rock, maybe? Not really R&B. Still, they strike a few cool grooves, and throw in some rudimentary vocal percussion and the occasional snap track. I think that places them somewhere on the hipper side of straight-laced. Ah, I know: middle of the road. There you go. Rescue: really, really good, middle of the road, gospel a cappella.

This outstanding EP from Rescue, featuring original songs, a stunning rendition of Amazing Grace, and, amazingly, an enjoyable staging of Kum-Bah-Jah, showcases the writing, arranging, and top-40 vocal stylings of an extremely talented Christian quartet.

Production is impeccable, and the musicality and vocal skills are top-notch — rich, matching vowels ring every chord, due in no small part to the nearly identical voices of brothers Josh and Jason McKenney and their bandmates Chad Krober and Jason Overstreet.

This is a young group too, surprising considering their rich sound, which is reminiscent of more mature, accomplished ensembles.

Unfortunately there is nothing in the liner notes about Rescue's history or where they're from, but I feel like this album is more of a sampler (two of the seven tracks are only a minute long). If the content grabs you, by all means add check out Rescue, but skip this one and buy Two Thousand Years Ago, their full-length follow-up.

Order by web at www.rescueministries.com or by mailing $10 plus $4 S&H to: