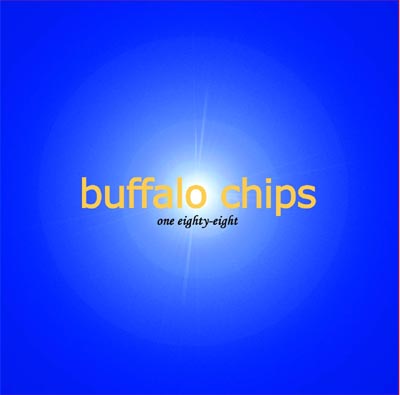 The Buffalo Chips have turned the corner, and everybody wins. One Eighty-Eight picks up where their previous two albums left off. The soloists are better. The arrangements are better. The tuning is better. We have more fun because they sound so good, and I bet they're having more fun, too.

I'm having more fun because I get to nitpick. This album has most of the basics covered, which means I get to spend my time on the details. First off, I didn't like their opener. A Moxy Früvous cover is funny and upbeat, but it also sounds kind of old-school at the head of a list of rock songs. The only way around this is to absolutely nail it, and The Buffalo Chips did not. The choruses on Lazy Boy are uncharacteristically out of tune, which is jarring and doesn't lead well into what is to come.

Two songs on this disc get 5s from me, and I will freely admit that my choices in that department were a bit arbitrary. I picked Jimi Thing because I liked the groove and the soloist. And I picked We Are because I hadn't heard the song before, and I thought their version sounded good. But I gave them a free pass on the cheesy synthesizer effect on one of the accent lines. I didn't think it hurt the song, but somebody else might find it annoying. Love in an Elevator was the third contender for an "excellent" rating. In the end, I stuck with a 4, because I felt I'd heard it all before. To me, though, those three songs were a step ahead of the pack.

Cheesy synthesizer effects came to the forefront again in Good Vibrations, which was otherwise a pleasant take on this standard. Looking forward, though, I'd caution The Buffalo Chips against this kind of obvious production. The whole disc was very actively edited, but I think they'd be better served by aiming for a more natural surface sound. It'll help them prepare for a broader audience.

This is a good album and it deserves a broader audience. The Buffalo Chips have gotten themselves ready for the big time, and I hope they enjoy the ride.

One Eighty-Eight is a fun and mostly successful album. Though The Buffalo Chips don't routinely reach greatness, they do offer a solid a cappella experience.

The singers sound most at home on the album's more laid-back tracks: Wicked Game, 72-Hour Daze (singing from experience?), and Walking After You. The Chips are best suited to these relaxed songs; their sound is just a bit too young to carry the quicker, more rocking tunes on the album. The sole exception is We Are, which remains solidly in fourth gear throughout. (The balance and engineering on this track is good, too — I like the flanged counterpoint.)

The Chips' soloists often struggle to channel the original artists they're covering. They pull off a credible Chris Isaak on Wicked Game, but a less believable Steven Tyler on Love in an Elevator. Imitation may be the highest form of flattery, but I fear this focus on attempting to mimic someone else's sound detracts from the group's chances for a unique and worthwhile sound. Part of the problem lies in song choice; songs like Bohemian Rhapsody and Good Vibrations are such products of the original artists that they are practically impossible not to vamp. And with the album bookended by parodies, the lines between cover, karaoke, and "Weird Al" Yankovic grow blurred.

Some small tuning problems can be heard on the disc, especially in the higher voices (Good Vibrations); these are abetted by blending difficulties between poppy-voweled baritenors and more classically open higher voices. A naked bass needs more backup downstairs. Percussion, however, is well-done, rhythmic, and pointed without being obtrusive.

I've reviewed The Chips before. If their next album shows the same level of improvement as this one did over its predecessor, then it will likely rate as excellent.

The Buffalo Chips and their studio engineer must have spent a ton of time getting things just right. Strong musicianship and excellent studio work make One Eighty-Eight one of the slickest collegiate a cappella albums I've heard. But in striving to achieve technical excellence on a semi-pro or even professional level, The Chips may have left a little of their soul on the mixing room floor.

This group has some skills. The guys cast their strong soloists into the tunes where they sound most like the original artists. In Jimi Thing, the soloist coolly slips out the verses just like Dave Matthews, while the bass soloing on Wicked Game is nearly the spitting melancholy vocal image of Chris Isaak (guys, get that kid some Prozac).

One Eighty-Eight sports some nifty arrangements, too. Offering solid arrangements that feature broad, suspended, dissonant chords, good, active texturing, and innovative syllables, One Eighty-Eight is quality musicianship — nothing is artistically risky, but each performance is thoughtful and well-executed. The group's arrangers have clearly mastered the use of big-group dissonant chords in tunes like Love in an Elevator and 72-Hour Daze. A few songs, though, sounded top-heavy, and would have benefitted from more low-end baritone and a thicker bass sound (Jimi Thing, Love in an Elevator, and We Are).

If The Chips put some serious time into arranging, they put even more into mixing. The balanced and effective studio engineering equals semi-pro vocal band quality, and even rivals a few pro mixes that I've heard. Each song has a different feel — yet still sounds like the Buffalo Chips. Not bad for a group hosting such a variety of tunes. Intonator-perfect pitch on every chord, super-juicy reverbs (Wicked Game), and well-used effects on soloists (We Are, Jimi Thing) will keep this album fresh for many listenings.

In focusing on studio-perfect pitch and rhythm, though, The Buffalo Chips lack the trademark "live show" energy of most college recordings. One Eighty-Eight focuses on technical perfection and slick production, rather than seeking a balance of studio magic and live performance artistry. Some of the solos lack sizzle, and some of the backing vocals barely change dynamic through entire songs.

I definitely got the feeling that very little was left to chance on this album. The strongest evidence is the vocal percussion which, in parts, is painfully perfect. The Chips sampled mouth-made sounds and used a computer to play back the tempo and rhythm exactly right. The result is a robotic stiffness on songs like Love in an Elevator and Duck Shack, where the ride cymbals overlap and the kick and snare alternate on precisely the right beats. The sequenced VP doesn't stand out as sorely on other songs, but a good, dedicated vocal percussionist would have helped add some life to the album.

On One Eighty-Eight, The Buffalo Chips pack strong arranging and vocal talent into a slickly produced package. The album is technically very good, but doesn't have the chemistry of a live show. Then again, isn't that the Holy Grail of professional musicians?