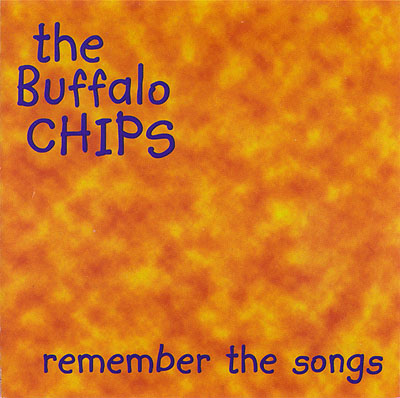 The Buffalo Chips rock out on their newest disc. They still haven't come close to musical perfection, but they are more than good enough to jump start memories for anyone who's seen them live. Or even someone who hasn't — I still felt the intensity.

Disc #1, Wait ... What Just Happened was a highly flawed but gutsy debut with some nice attitude. Remember the Songs shows that the Buffalo Chips are getting better and, more importantly, that they are hanging on to the chutzpah that made them so engaging in the first place.

There's a lot of doo-ing and ba-ing on this album, a lot of loud, and no wunderkind soloists to make you want to draft from Buffalo. But you know, there's a lot here that's interesting. Moxy Fruvous' King of Spain is very credibly performed, and you could make a case for Semi-charmed Life on the next BOCA. Surprisingly good is the Fozz Rap — and besides, who would think to write a disco-era rap song, segue into This is How We Do It and keep it one of the better-done cuts on the disc? The ending pushes it back to novelty-land, but it still scores points with me.

Beck's Deadweight is flawed but gutsy and pretty creative, which always scores points with me. 4 A.M. is an unusual, slower song choice that works. And almost all of the soloists are decent, which is no minor feat.

Even the less-good songs have raisons d'être. Fee, originally by Phish, sounds like it's tanking early but recovers halfway through and has some neat moments and a creative arrangement. Sir Duke is generally weak, but I like the big group scat and the falsetto trumpet accents on the choruses.

This album reminds me of some of the Off the Beat albums from five or six years ago. There were a lot of flashes of greatness, but the polish was still a disc or two off. These guys haven't quite made an album ready for consumption by strangers, but they show a lot of promise (and I bet they put on a great show). Keep an eye out for them.

The Buffalo Chips have certainly grown a lot since there last album. The last time Chips went into the studio they put together a compilation of overdone songs like Oh What a Night, Under the Boardwalk, and Moondance. The few contemporary numbers they tossed in might have helped add some variety if they hadn't so diminished the quality of the album. (Their cover of Cake's The Distance was a tuneless mess.) Their new CD, Remember the Songs, is a major shift of focus for the chips. There are still some old school standards here (Desperado, Sir Duke, Love the One You're With) but most of the songs are contemporary, and some of the song choices are even (GASP!) off the beaten path.

While the Chips have come a long way as performers, they still need to improve their skills as producers. With the exception of the live cuts, the songs are pretty clean, but the soloists are sometimes lost in the mix. The solos ought to float above everything else, but instead they sometimes sound like they're hiding behind the bass and percussion. In what could have been a great opening cut, an otherwise fun solo on Love the One You're With is lost in the mix. Similarly, 4 A.M. is almost perfect, but the sweet solo is too faint.

The one song where everything really comes together is Semi-Charmed Life. Of all the slacker-rap songs that have come out recently, Semi-Charmed Life is probably most deserving of an a cappella treatment and the Chips do it with real class. The soloist is remarkably better than the guy from Third Eye Blind. Not only is he not a mush mouth, but his clear voice strongly soars above the backing vocals. He hits a falsetto note or two that he probably should have steered clear of, but overall it's a great solo backed by an energetic group of singers. Most of the solos on Remember the Songs are strong (even if they're muffled in the mix), but there are one or two performers in the group who sound choked.

Are you sitting down? You are? Good. You should know that there's a hidden song at the end of this album and it's actually good! Shocking, but true. It's a live recording of the groups departing faculty advisor (they claim her name is Patti O'Toole) singing a nice sentimental solo (that happens to explain the CDs title). It's short, well sung, and there's no over-long pause between it and the last official song. All in all, it's a great hidden track. It's a shame the other live cuts don't sound as good. (Nice singing on Desperado, but the engineering isn't up to par.)

One last thought: The cover design is pretty damn bad. I've abused Photoshop's "cloud" filter myself. Most designers do at one point in their life. But what were they thinking when they sent that orange nightmare to the printers?

Ah, the interesting beast that is collegiate men's a cappella. Here's my stance, so you know where I'm coming from: I recognize the value of sheer raw hormonal energy and sometimes having a blast on stage in front of all your dorm buddies can be so invigorating that it becomes more important than actually getting any work done in rehearsal. Hey, I've been there, done that. Most of us have. But there should be something gained when tuning goes out the door, or we the listeners get a raw deal. If you have to sacrifice tuning and Stanford-like polish, at least do something interesting, exceptionally funny, or in some other way entertaining to Joe College Listener. And heck — if you can sing in tune too, rock on.

The Buffalo Chips don't do it for me. They have plenty of blend and tuning issues, plus relatively dull arrangements of relatively standard tunes (at least there are more current tunes here than on their last album, which was mostly classic rock). Recording quality is weak at best (17 guys in a cafeteria or poorly miked theater), soloists range from pretty good (4 A. M., Fee) to pretty poor; even the liner notes seem to say, "We are average".

Friends of the group or those who've seen them live and might want something for a souvenir will appreciate this CD, but few others will.

Having had the chance to listen to the Chips' previous album, I can with great pleasure report that they have developed a great deal, beefing up their strengths and shoring up their weaknesses essentially across the board. This album is much better balanced than their last, with songs ranging from humorous (necessary for a guy group) to serious, ballad to rock and so on. There is a much heightened sense of coherency, of the individual members singing together as a group. Unusually, both the live tracks and the studio recordings show off their energy and musicality to equal effect.

I find the soloists to be generally well-chosen, with some very remarkable voices and ranges making some songs sheer delights. As mentioned, there is a bit of daring in song selection, and I applaud the guys for their non-traditional choices; would that more groups could stray as successfully from '80s covers as the Chips have done! Backing is smooth, although I find myself annoyed at the higher voices on some tracks; they sound a bit overmixed. Great nonsense syllables help to texturize most of what they do, with standard "oos" filling in well on the more ballad-y tracks.

Some nitpicking: percussion could be more varied in sound (although I like that it is spread across a number of people), and on some tracks simply louder.

Treat yourself to this album. It is completely enjoyable, finger-snapping and toe-tapping. From the clear opening of Love the One You're With through the innovative breakdown-bridge of Africa, this is a winner.

There are days when I absolutely love reviewing these CDs for RARB; the CDs tend to be consistently good or bad. You can pick out one thing, or several sometimes, and say that was what made it so good/bad.

Then there are CDs like the Buffalo Chips', where so many things are working against each other that I have to decide what wins out and how I'll score a CD.

I remember reviewing the last CD, and how I was so excited by the potential that I felt there was within the group. Now I'm confronted with a group of 17 (!), a size of which I have previously compared to a small glee club. There are conflicting good and bad choices, songs that have been over-covered, versus songs that I'd never heard before, or heard covered before. There is a surprising majority of songs where the arrangements don't take advantage of the possible multiple parts that would seem to be available for a group that numbers 4 T1's, 4 T2's, 4 B1's, and 5 B2's.

Even within tracks I'd be conflicted, like with Deadweight, where I thought the arrangement made good use of the voices there, but was hampered by an unneeded riff from Where It's At and a sound that was akin to a cat on it's way to be neutered.

Even the rap, which under ordinary circumstances I'd have hated immediately, was quite inventive and believable, until the tuning went out in the last verse, which also happened with Africa.

Then there were the highs, like Fee and Desperado; I'm not familiar with Phish's music, outside of the two or three tracks I've heard covered, but was well-pleased with what the Chips did with it. Desperado, as overdone as it is, was arranged differently (to my ears) and was quite expressive with volumes. Never mind the fact that Darrell Belch sang solo on both with authority.

Days like this, I hate the five point scale, because there aren't intermediate marks to give. so in the end I suggest it as a "4", but qualify it as a low 4...kind of a B-minus. The Chips haven't lost anything since their last effort, but I'm not convinced that there's that much more gained.

Last thought: Chips — my recommendation for the next CD — smaller group or more complex arrangements. Everything's there for a terrific recording, but the material is lacking most of the time.