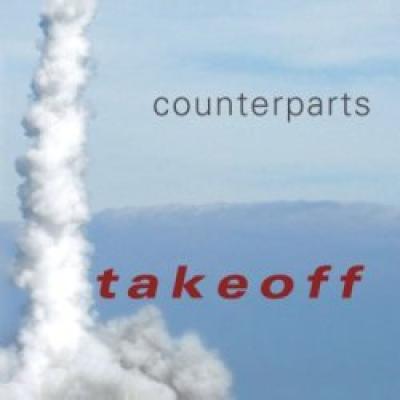 Pleasant new album from the Counterparts, whose reputation has gotten a nice boost from former member John Legend. The new album doesn't let down the side, presenting a solid set with strong soloists and a reliable backbeat.

Bruce Wells gives two fine performances on Volcano and Common Pleasure. His voice has an appealing and flexible timbre, and his two solo turns are different enough to show some real range. The other male soloists generally sound pretty good, but their voices sometimes thin out when their songs venture into unfriendly territory. As for the women, there seems to have been a decision to inhabit a sound space centered around Aimee Mann, which is a nice change from the thin-nasal tone that dominated the a cappella scene a few years back but maybe also not the fullest expression of the female human voice. The approach has some highlights — I thought Meghan McHugh's interpretation of Building a Mystery had more heart than Sarah McLachlan's original — but can get a bit dull once it starts permeating the arrangements. In themselves, the arrangements generally have a good groove and some jazzy finishes, which I think is an excellent approach to bringing pop songs over the wall into the acappellaverse. I liked the accents on Sunday Morning, as well as the energy surge into the chorus of Letter Read and the shimmery spaces of Danger.

I found this album nice but not memorable, solid but not overly engaging. But to focus on that seems unfair. The Counterparts laid out a vision, stuck to it, and made a solid album, and that's a big achievement.

Somewhat hesitantly, I think it's safe to say that with their latest CD Free Ride, UPenn's Counterparts have taken a step forward from their last effort, but it's a small step and many of the same problems remain.

Much to my chagrin, the Counterparts still seem to be committed to shedding their vocal jazz roots and staying entrenched in pop/rock, and occasionally even more esoteric repertoire. It's a shame, really, because the most enjoyable moments on the album come when the group fuses whatever shreds of jazz sensibility still linger with its desire to perform more modern material. OK, so Jamie Cullum is in fact a jazz artist so Twentysomething is not much of a stretch, but Jason Mraz's Common Pleasure bounces with energy and playfulness, and my personal fave, Damien Rice's Volcano, is suitably smoldering with a great arrangement, smooth solo and wonderful all-around feel.

But on most of the remaining tracks, the group cannot elevate itself much beyond "good, but not great". The CD starts particularly weakly with two extremely busy tracks that lack any real sort of chordal center. So busy are the rhythmic backgrounds that there is little room for tone and blend and an ensemble sound. Even when there are occasional block chords in the background vocals, either the voicings or the mix — tough to tell but with Jeff Thacher at the console I would tend to blame the former — don't yield a cohesive sound, a problem which shows up again quite pronouncedly in the B section of the verses of Building a Mystery.

Other somewhat more conventional choices also fail to inspire: Maroon 5, and Sunday Morning in particular, probably have set a record for the fastest to achieve overdone status, and this version won't wow you, with an arrangement that errs in the opposite direction (from what is described above) in its simplicity and repetition. and a soloist whose desire to sound casual and laid back crosses the line into imprecision. Erykah Badu's Danger is an energetic track but not much more than a transcription with minimal real "singing" involved, while Gavin Degraw's Chariot was fine, but not much more.

I know it's probably unfair of me to bemoan the evolution of this storied ensemble into a better-than-average but still somewhat cookie-cutter college a cappella group. But the brilliant Counterparts of old found a way to fuse the old and the new, and indeed even the current group succeeds most, at least to my ear, when they do the same. So perhaps it wouldn't be such a bad idea for them to take a step backward stylistically in order to take a step forward musically.

I had to listen to Free Ride and Counterparts to remember who the Counterparts were. In the back of my mind, I could picture that cool ferris wheel album art, but takeoff didn't light a spark of recognition of the "Counterparts sound".

Prior to takeoff, my favorite Counterparts recordings were Free Ride's Father Figure, Side, and Paper Moon and Counterpart's Rock Steady, Rinse, Steve McQueen, Supa Dupa Love, and Alone. The common thread to these songs is a totally committed soloist, charming, genuine energy from backing vocals, and arrangements with distinct verses and chorus that build through the entire song.

As if the group made a conscious decision to record an album emphasizing great vocal percussion, takeoff prizes the rhythm section, sacrificing the radiant solo presence and vibrant arranging style that drives songs on Counterpart and Free Ride. These qualities are suppressed in takeoff, subservient to a rhythm section on steroids and hampered by lackluster arranging.

takeoff too often relies on thumpy VP and hearty bass to drive a song, and many songs have a "big beat a cappella feel" that reminds me of Schrodinger's Cat. Through a frustrating majority of the album, the balance prioritizes The Big Beat, then solo, then background vocals, which are often wishy-washy. Just two tracks in, the album feels overproduced, its personality washed away.

In the past, the group has chosen smart songs that lend themselves willingly to the a cappella format and crafted arrangements that build excitingly through the last chorus. Alarmingly, half of takeoff's arrangments are simplistic and a little boring, relying on The Big Beat to drive things forward. Instead of decisive chord movements and playful highlights, the group wields "whoa whoa", possibly the limpest, slackest syllable an arranger could ply for forward momentum (Take Your Mama, Building a Mystery, Chariot). There are too many block chords that peter out instead of move (Take Your Mama). Some songs use the easy-way-out arranging technique of pre-repetition, stealing syllables from the solo lyrics just before or after their solo delivery (Sunday Morning).

Searching for answers, I was enlightened and then dismayed to read that Jeff Thacher is given production, recording, and mixing credits. Enlightened because of course the album is rhythm heavy and of course the VP is lightyears more nuanced than prior works. Dismayed because I don't like the direction an aca-star like Thacher has taken the group; the group's solo and arrangement-driven sound feels commandeered, and I would like my Counterparts back now, please.

So it saddens me a little to say that takeoff is probably the overall best album I've heard from the group. It's overproduced, yes, but also polished to a shiny gleam. The drum kit sounds are superb and treated with reserved artistry, a testament both to Thacher's studio work and to the talent of the album's single percussionist, Shun Loong Chua. Though bullied by the rhythm section, the soloists still have great voices and gripping presence. The group has again picked smart, likable songs and crafted them well for voice (Volcano, Danger, Letter Read). Several arrangements have strong elements that are regrettably understated (When I Get You Alone, bridge of Building a Mystery). I've never heard six of takeoff's ten songs, always a plus for repeat listenability and originality.

Though I didn't recognize the Counterparts of takeoff, the album will likely be received as an advancement for the group and its sound. I imagine the group learned from the album's technical achievements, but I hope the Counterparts remember that soul and personality make an album endearing.