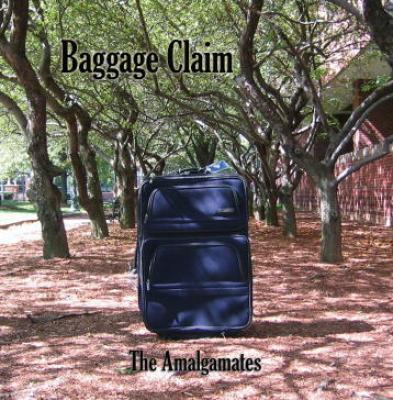 The Amalgamates are back! Better than ever, in their best form in ages! Singing the same tired repertoire that has flooded the a cappella world since the 1980s, when the Amalgamates first arrived on the scene.

Hasn't the acappellaverse realized by now that Stevie Wonder wrote a lot of songs? Bunches. He wasn't just a two-hit wonder. I Wish is a great song and Becca Fagen sings the heck out of it. And hey, I quite like Superstition, when it comes to that. But there's more to life! There have been so many good bands, writing so many good songs — why would any group turn to Jimmy Eat World for one seventh of their album's track list? The Amalgamates waste two songs on those bland boys and fill the rest of their album with many of the usual suspects, at the expense of a world full of opportunity.

I am giving the Amalgamates a hard time to make myself feel better about scoring their album "good", instead of "excellent". They did a really great job with it — everything sounds good, technically. There are some great soloists. There is some awfully nice singing, even a few dynamic crests here and there. Not every song has vocal percussion, which shows notable restraint, and many of the arrangements (notably Zombie and I Wish, actually) have some interesting stuff buried inside them. Becca Fagen has a great voice, and so do other soloists like Evan Barnathan and Erin Bergen.

But still. I don't care for this album. I have only listened to it when actively trying to write this RARB review, which I have started on several times before setting it aside until later. I will probably never ever listen to it of my own volition, nor will I miss its "jens", "doos" and, dare I say it, "der-ner" group guitar solos. As excellent as it is, I don't think it belongs in the same group as the other "excellent" recordings I've gotten over the last couple of years.

So, I'm sorry, Amalgamates. You did good. Better than your last few albums. Let's all throw a party and then go out and find some new songs.

As hordes of collegiate groups jump on the bandwagon of bright, shiny, in-your-face production, the Tufts Amalgamates seem determined to entrench their position on the other side of the stylistic spectrum. This strategy is not without merit — at its best, the Amalgamates' distinctively atmospheric, soaring blend still moves me as much as it did upon first listen years ago. Yet the latest album from this Tufts stalwart falters slightly as a whole, despite a number of lovely individual tracks.

At the heart of it, Baggage Claim is simply too much of a good thing. The Amalgamates might blend better than just about anyone else in the business, but this does not come without the risk of sounding really nice or really boring, sometimes at the same time. In particular, I found that the mixing here often obscures the textured (if repetitive) backing vocals and rhythms at which the arrangements hint. As a result, each track runs together, and we're left with an album that lulls us into disinterest before it reaches its stellar conclusion. That's a shame because the Amalgamates are still singing better than a lot of groups out there. But without a proper venue, it's hard to remember that over the course of fourteen overly similar songs.

Fans will be reassured that the Amalgamates formula still works beautifully with layered, melancholy tunes by groups like Coldplay, Toad the Wet Sprocket, and Delerium. But Baggage Claim also continues the foray into rock we saw in Stopping For Breakfast, with middling results. Appearances by Kelly Clarkson and Incubus on the tracklist let the Amalgamates keep up with the collegiate Joneses, but it may not be the best choice. The Amalgamates' sound, usually effective and striking on the right repertoire, doesn't provide jagged edges as backup like Off the Beat or the Stanford Harmonics do. As a result, the success of harder-edged tracks rests solely on the soloists' shoulders, which sometimes works (Erin Bergin's wickedly jagged Good Luck) and sometimes doesn't (the overly cautious Gone).

There's something to be said for the audacity of holding one's ground against a rising tide, and I'd be saddened if the Amalgamates abandoned their stance. It's just that embracing a bit more clarity in the mix and exercising tighter discipline over the tracklist would lift the Amalgamates out of the admirable camp, and back into the ranks of the ethereal.

The Tufts Amalgamates' latest, Baggage Claim, is an archetype of studio production: dead-on vocals, stellar arrangements, textural sounds that create great vocal landscapes, and a diverse repertoire. I'm not sure why, then, I'm ridiculously bored with this album. Maybe it's too perfectionist, or takes itself too seriously, but I feel completely disengaged from the music, almost as if it were designed to play behind a television scene. Listening to Baggage Claim is like watching a movie on TBS for the thousandth time: great to have on while you're doing something else, but you don't really need to pay any attention because it's nothing you haven't seen before.

Something is conspicuously missing from Baggage Claim: individuality. There's a glimmer of hope on the opening track, Zombie, with a sassy, biting lead by soloist Erin Bergin, but she's caught in the trap of the Dolores O'Riordan yodel that has dragged down nearly every cover of the song since it first came out. (In the spirit of full disclosure, though, I should mention that I actually enjoyed the O'Riordan impression found on Stopping For Breakfast.) Worn Me Down might also have benefited from a twist of originality. There also seems to be a shortage of baritones and basses here, with an audible chord gap in many songs (Stellar, Pain, Gone, A Praise Chorus).

The music's fine, don't get me wrong. It's all quite listenable, and I can't quite put my finger on anything in particular that's awful, but I also find myself reaching for something to praise. Some of what I hear is reminiscent of recent Amazin' Blue work: everything is so closely pegged, so very intensely solid that it's nearly dehumanized. Harmonies are tight and well-blended (Good Enough, Because) but ultimately forgettable. White Wedding is forcibly executed, also taking itself with such sincerity that it eventually strays from true entertainment into novelty territory. I also found Good Luck a little too controlled, though it certainly showcases the side of soloist Erin Bergin that I found severely lacking on the first track.

Only three songs really jumped out as above-average to me. Not surprisingly, Warning Sign, a mellow, contemplative piece by (you guessed it) Coldplay, stands out against the other tracks as a selection appropriate to this new recording/arrangement style the 'Mates seem to have adapted. I really enjoyed Evan Barnathan's somber solo, invoking but not mimicking Chris Martin's original lead. And Something's Always Wrong was a nice demonstration of arranging skills. The lower voices are heard much more clearly here, and I enjoyed the female harmony against the adequate male lead. Finally, the lead-in to the opening verse of A Poem for Byzantium makes good use of the bass voices, scarcely found elsewhere. I would, however, have liked to hear a little more vocal texture throughout the song, which relies mostly on a variation of sustained "ahs".

While most listeners will find Baggage Claim perfectly fine, to me it felt rather reserved, confined to a particular vocal space. This current release lacks the freedom and unrestraint that I loved about Stopping For Breakfast, which had a delightful spirit and life. Sadly, I feel as though Harry Potter's Dementors might have come to kiss the 'Mates and suck the soul out of their music. I don't know how a group goes from releasing an album that ultimately became my Pick of '05 to something so regretfully ordinary, but I'm hoping for a 180 on the next album to revive my faith in the 'Mates as a solid, annual favorite.