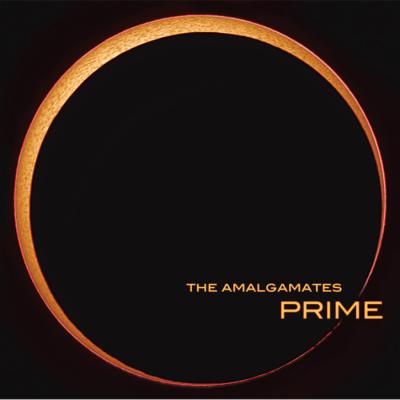 Prime is ready for prime time — loud, shiny rock music all glammed up and ready to go out. It's loud, it's poppy and it's got plenty of studio polish. It also sounds a little dated. The arrangements are full of blasting block chords, buffed over with percussion and solo, and the groove feels a few years old. I couldn't shake the feeling I was listening to an Off the Beat album from a few years back, instead of a new recording with all of the latest trends.

To be fair, only five of these songs have actually been recorded by Off the Beat, as far as I know. (And one of those, The Pretender, presented here in classic OTB-arrangement style, is on the new Off the Beat album, which I haven't gotten around to hearing yet.) Also, the Amalgamates album benefits greatly from the current state of the art in a cappella production. The voices here have made a studio recording, with all of the attendant work and craft. That means a nice low bass, crystalline high soprano accents, convincing percussion and solos that sound out front and compressed, just like on regular radio.

Some of the throwback stuff is a nice treat. Josh Kelley shows off one of those great collegiate voices in Almost Honest, with a timbre and delivery that would sound equally at home crooning jazz or a smooth jam. The song choice here is more of a country number, but I'm sure it's plenty popular with women and is a hit part of any Amalgamates live show. Likewise, The Pretender shows that those busy, syllable-heavy onslaughts are still fun, particularly in small doses. Since most of this record sounds very of-a-piece, the various efforts at variety are extremely welcome.

On the new side, A Wolf Among Lilacs is a great tune that starts the album off right with a great solo and tons of energy. It sounds right at home with recent, overplayed pop fare, but the group informs us that it is, in fact, virtually unknown except for a five-song EP by original artists the Medicated Kisses. So go Amalgamates, pulling something on to the beaten path as well as turning in a great performance.

Prime is a good record with a great professional ethic in each and every performance. It may not blaze much new ground, but it covers its chosen territory well.

The Tufts Amalgamates' latest album, Prime, is a prime example of perfection. Rich arrangements are executed without flaw, the tight blend forming a wall of sound that supports skilled soloists. Yet there is something missing. On the road to this perfection, Prime left its heart and soul at home.

Prime is the a cappella album a computer program would produce: technically brilliant, but lacking emotion. Do the soloists understand the words that they are singing? Do these words mean anything to them? Have they internalized the emotions each song is trying to convey? It doesn't sound like it.

Consider an actor on a daytime soap versus Daniel Day-Lewis. The former is saying his lines and following the blocking, but he clearly doesn't mean it. The best actors make you forget that they are acting; they carry you away. It is the same in singing. What the Amalgamates are doing now is closer to karaoke. Good karaoke, but karaoke nonetheless.

Their soloists need to be broken. They are so careful. They want to hit all the right notes for the right length of time and with the proper breath support. That is a good goal, but they need to dig deep, to find something in themselves that identifies with the songs they have chosen to sing.

Lines like "I've forsaken and I've sinned, leaving fragments of a man so broken" or "I'm just another soul for sale, oh well, the page is out of print, we are not permanent" or "Let down and hanging around, crushed like a bug in the ground" might as well be "peanut butter watermelon peanut butter watermelon".

The Amalgamates are so very close to what they are trying to achieve. I hope they get there with their next release.

The Tufts University Amalgamates' latest studio effort will appeal heartily to all the a cappella purists out there. Free of all the aggressive EQ, compression, distortion, and octavizing, Prime gets the job done through sheer vocal merit. Kudos, Amalgamates.

Very strong leads, well-sung backs, and some capable percussion make for enjoyable listening throughout. In particular, Justin Fan, Miriam Wertlieb, and Eric Stahl deserve recognition for stellar lead performances. It is no coincidence that their leads happen to fall on my favorite tracks. The backgrounds exhibit commendable singing technique and sensitivity, translating otherwise mediocre arrangements into quality tracks. Bass specialist Ian Greaves shows off some great style and chops, though I am not a fan of the muffling EQ smeared over his tracks through most of the album. The percussion is solid, if slightly too fill-centric, on all but three tracks, A Wolf Among Lilacs, The Pretender, and Anna Molly, when some annoyingly weak sounds (including the disgusting "psst" snare) creep into the mix.

Three issues emerge on Prime — lack of creativity in the backs, insincere leads, and a persistent thinness, especially noticeable on the wailing parts. For the backs, the interludes of Uninvited provide perfect examples. The Mates set up the ambiance through the opening sections of the song, but once the lead cuts out and the focus rests solely on the backs, they squander a golden opportunity to do something, anything. It happens three times in that song. The bridge of Suddenly I See tries to make something of itself, but instead it haplessly obeys the bar lines, sitting on that awkward major+9 with no movement in the last bar. The lack of interesting syllables and textural dynamics in Let Down is just criminal.

The common theme here is that there is far too much pretty, neutral vowel going on throughout Prime. The Amalgamates can sing, clearly, and their excellent fundamentals serve them splendidly on the ballads. They just need to step outside their comfort zone and experiment. Not everything needs to sound pretty.

Other missteps: using "doo" as a syllable in Anna Molly, the weak attempt at a trumpet in The Predatory Wasp of the Palisades Is Out to Get Us!, chaotic swing in Suddenly I See, and the Cavalier backgrounds on Heartbreaker. Yep, capital "C". Even when LeBron puts up 50, the scrubs still need to chip in some points to get the win. A few too many songs end clumsily as well. It is always a shame when a goofy ending mars an otherwise good song. The Pretender ends with a moist breath right before the final note. Paperweight ends out of tune. Let Down's ending may or may not be cool, but it fades out before we really get a chance to decide. Suddenly I See ends with a glaring voice crack in one of the tenors. On the flip side, You Know My Name ends with authority — Eric Stahl shredding his entire vocal apparatus all over that note.

For the leads, most sound great, and all of them are excellently executed. A few of them just default to the original performances unnecessarily. When your group boasts singers of this caliber, there is just no need for histrionics. Anna Molly's soloist, while obviously an excellent singer, affects a pubescent whine at times, resulting in cringe-inducing moments like "distress" in the second verse. The same goes for Let Down and "Wasp". The point of doing a "natural" album like Prime, I'm guessing, is to give the listeners an honest impression of the group. That should carry over into the leads as well. Audiences like sincere, and can generally smell BS a ways off.

I'm not sure what part of the production chain is to blame for the thinness, but to me it sounds like a front-end problem. Especially prevalent at epic moments in big leads like You Know My Name, Heartbreaker, and Mercy, but also on harder backgrounds like Anna Molly and The Pretender, the anemic source audio betrays what I am sure was some top notch studio singing.

Good song choices, good singing, and close attention to detail make up for my (unintentionally) long-winded criticisms. I enjoyed the natural sound and I can definitely recommend the album, especially to the purists.