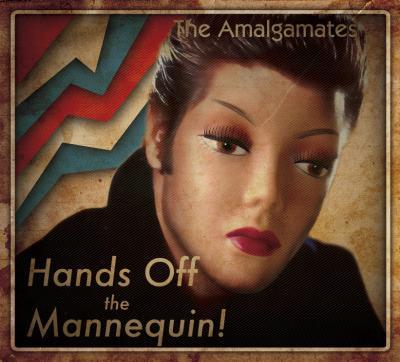 There's an exclamation point in the title of Hands Off the Mannequin!. I wish there had been more in the music. Carry On Wayward Son is the only song with bite, a novelty in more ways than one, and the energetic centerpiece of this latest Amalgamates album.

Good news: the group sounds good and can sing. The album is careful, precise, and generally well-crafted. The arrangements are safe. I wanted more of a percussive element in the singing — fewer backgrounds, more sharp bits, more little spaces — but I can understand how that might have been a second priority to the general technical rigor these guys were striving for. The bass lines go for harmonic drones rather than rhythm, a very nice sound that also serves as an anchor for whatever else is happening. There's very little dead air in these songs, and occasionally I wanted a break in the wall of sound.

Many of the songs sound like show tunes: polished, sincere hothouse flowers, like the bouncy When the Day Met the Night, softspoken Just Say yes, or even the emo fire of Benjamin. Alex Green sings the hell out of that song and also nails Carry On Wayward Son, which suggests to me that he's the light of the album and will probably be doing lots of very interesting things for many years to come. I hope he keeps us posted.

The women-led songs are poppier and less theatrical. Right As Rain sounds to me like a Sara Bareilles outtake (it's actually a cover of Adele), and Battlefield has a mushy-mouthed Beyoncé momentum. The hook lyric "go get your armor" kept ringing differently in my ears — "get your ramen"?, "get a runnin'"? I finally caved and looked it up on the Internet — but I thought the overall groove was headed in the right direction. Lori Allen and Alex Rodman are the soloists on these numbers, showing other great talents in the Amalgamates midst.

The Chain (another Alex Green moment; no coincidence) comes as close to catching the Fleetwood Mac vibe as most anything I've heard a cappella. It doesn't quite have the impact of the original. I'm not sure that anyone else could. Still, I felt like they got where the song was going and they went for it, even if they didn't quite have the hammer-crash vibe needed to get it completely right. Son of a Preacher Man tries too — but I thought it splattered, falling out of tune here and there yet a little too compressed to have a full-on old school soul moment.

Alex, Alex and Lori are the reasons to buy this disc, so you can say you heard them when. The rest of it is fine. But it may not stay with you once the pleasant music ends.

This will certainly sound weird, but one of the cool things about the Tufts Amalgamates' latest album, Hands Off the Mannequin!, is that I don't initially notice the soloists. That might come across as a backhanded compliment, but hear me out: the soloists are, for the most part, great: they sound good, and the group has picked songs that truly suit its singers. That in and of itself is a commendable accomplishment.

But my comment is more of a compliment to the rest of the Amalgamates. Hands Off the Mannequin! sounds like a true group effort, and that goes for everything from the solid backs to the arrangements to the overall commitment that resonates on every song. This is an album where I wish I could rate the "Energy/intensity" category a '6', because the 'Mates sound as though they are truly owning — and loving — every moment on this album.

That level of commitment makes for a really enjoyable listen, whether you're familiar with the songs or not. Carry On Wayward Son is an outstanding version of a song that's rarely ever executed well (thanks to a killer solo by Alex Green and a wailing guitar line). Honey has a great groove thanks to a full arrangement (the backs popping out with what sounds like "you've got-ot-ot" just adds such a bouncy drive to the chorus). The album-closing Boy Lilikoi lends itself perfectly to an a cappella sound, and The Chain captures Fleetwood Mac's slight dissonance in a beautifully captivating way.

The imperfections in this album are minor but noticeable. The beginning of Just Say Yes is too busy and distracting. The bridge on Battlefield loses the power and momentum of the rest of the song (and I wish that the first cry of "battlefield!" in the chorus had a little bit more punch to it). And even a Joss Stone interpretation of Son of a Preacher Man can't add much interest to an overdone tune.

Still, despite all that, this is a great album and an outstanding (and engaging) listen. And regardless of my intro, the soloists here do deserve a mention: Alex Green absolutely wails on Benjamin; the soloist and harmony that transitions into the "better go and get your armor" ending on Battlefield is chilling; Eric Stahl gives Let it Die a great rock groove without directly imitating the Foo Fighters; and on and on and on. This is not a perfect album, but it is excellent and well worth hearing.

One note that has nothing to do with the sound on this album: kudos to the Amalgamates for listing not only the artist who originally performed each song but also the songwriter(s) and publishing company. Thanks for doing your homework, 'Mates!

One additional note: Alex Green (whose name is all over the credits of this album, from soloing to arranging to the production, recording, editing, and mixing of the album) is, as of this writing, a reviewer for RARB.

Did you know that The Amalgamates from Tufts University can sing? I don't just mean sing — I mean sing! Well, if you didn't already know, just take a listen to the group's album Hands Off the Mannequin!. It won't take very long at all to learn that my original statement is 100% accurate.

With its opening track, The Chain, The 'Mates make sure you know this group is not messing around. The 'Mates have arrived and are ready to rock. And, trust me, these singers do. Both The Chain and the following track, When the Day Met the Night, are both riddled with talented people from all ends. Baller arrangements meet awesome soloists meet absolutely brilliant mixing.

Then out of nowhere, The 'Mates completely ran out of gas for the next chunk of tracks. Don't get me wrong here, nothing on this album ever dips below average, but almost nothing can reach the bar that was set so high by the first two tracks. The rest of the album pretty much goes as follows: bad song choice, to "I've never heard of that band", to bad song choice times three, and then ... Oh, and then there's the best song on the album.

Let it Die blows my mind. Seriously, I died. I'm dead right now. I thought the first two tracks were awesome, but I simply had no idea. A really brilliant arrangement meets killer production meets the most convincing awesome soloist I've heard in a while. Lori Allen and Brie Bills co-arranged the song and found a perfect interplay between the male and female backing vocals. It's naturally full of dynamics and builds and falls with such grace until ... well, until it pimp-slaps you in the face. We're reminded of the awesome capabilities of mixing and the song totally rocks out. Aside from the wonderful arrangement and production, I don't think I could have believed the song if it had been anyone else singing the solo. Eric Stahl completely sells the song to me like it is a used minivan and I am a newly single mother of four. I kid you not. I simply cannot praise this track more than I already have. Buy it and listen to it in your car with the bass all the way up and windows down on a beautiful day. I promise you will love it as much as I did (and still do).

Sadly, The 'Mates fall back into old habits after that highlight. Again, good stuff, but just not what I know they can deliver. I find the biggest letdown the closing track Boy Lilikoi. After the first two tracks and then an even better one hidden in the middle, I was so ready to hear the awesome-ness that the closer would deliver, especially when I read in the liner notes that John Clark arranged it. I certainly did not get what I expected. I got a very well mixed and produced cover of an odd song that was certainly better than the original ... but was not a closer. Not even a little bit. Perhaps if it was in a different spot on the album, I would think differently of it. But as the closing track on a collegiate album that delivered some well deserved "5" tracks, I wanted so much more from it than what I got.

Which made me look over my scoring of all the tracks, which in turn made me realize how many tracks were on this album, which in turn made me remember that editing is so important for collegiate groups. When a group spends all the money and time an album takes, the group wants to put everything it recorded on the finished product. The members hate saying, "No. That track is not on par with everything else. Cut it." The group just won't do it. If Hands Off the Mannequin! was a nine or ten-track album, the overall feel would change. It would go from an average/good album with a few awesome moments, to a two-thirds pretty damn good album and one-third baller awesome amahhzing album. And there it is.