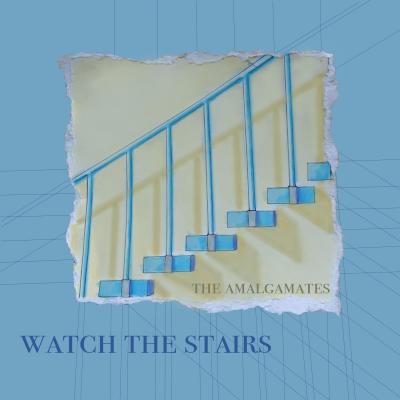 Watch The Stairs is an album that moves. From the opening marching cadence of End of Time to the trenchant call of What's Going On, this a procession of songs that dance, sway, and pull.

An album of this quality is a true collaboration. The bass section anchors the album throughout, with a lively, string-like sound that keeps me tuned into every song. The production team of Alex Green (also formerly part of team RARB) and Alexander Koutzoukis, worked hard to capture that sound and show it off at its best, along with stalwart mastering specialist Dave Sperandio. Then there is the arranging. Charles Winston has the credit for a full half of the release, but there are four other current Amalgamates with arranging credits as well, and not a dud on the album. Winston's arrangments for Every Little Thing She Does Is Magic and Want You Back are particular standouts, each capturing the energy of their source material while also transforming it into the basis for a stellar group effort. On those two tracks, I enjoy the backgrounds as much or more than the solo lines. When a group works together this well, it's a delight.

End of Time is the full package: great song, superlative solo from Isabel Grossman-Sartain, standout percussion anchored by Thomas Risoleo, another strong arrangement from Winston, and an overall sound that grabs your attention and holds it without ever weighing it down. Let Me Love You is a solid follow up, showing that the group's talents will flow down the lineup. I confess, the power ballads in the middle felt a little ponderous on multiple listens, but that may come down to personal taste. In My Blood, Guillotine, and Pray have their impressive block-chord moments, their building pieces that pile on as each song grows. As songs, they're not my cup of tea. As performances, they work just fine.

Watch The Stairs is a confident album, that expects you might trip because you were distracted by its groove. In this case, the Amalgamates have earned it.

If I can spend all of my allotted space expounding on the production and engineering of a given album, that's likely a sign that something is extremely wrong or extremely right. When the album is recorded, edited, and mixed by Alex Green and Alexander Koutzoukis of Plaid Productions, it's predictably, inevitably the latter.

Indeed, thank goodness the numerical scores speak for themselves, because it relieves me the need to go too in depth on the solo I especially enjoyed (Isabel Grossman-Sartain on What's Going On) or that arranging touch that particularly caught my ear (Charles Winston and Georgia Kay's layering in the establishing chords handling the backing voices of Let Me Love You that elevates the whole arrangement from whole note boredom). Similarly, I don't have to spend much time on the solos — all competent, but some shading towards a nasal/pinched tone and others showing more confidence in material that calls out for vulnerability — or on slightly less compelling arrangements that could have done a bit more with their pads to keep things engaging (Want You Back, Searching for a Feeling).

Instead, I can tell you quite plainly that Watch The Stairs is one of the best "sounding" collegiate a cappella albums I've heard this year. No, in many years. Very possibly up there among the best I've ever heard.

Why exactly is that?

Well, to be honest, it's not the easiest thing in the world to describe. I know more than a novice but less than an expert about recording techniques, but I wouldn't hazard a guess as to what type of mic or what recording technique or which plug-ins or EQ settings "the Alexes" (as they are sometimes known) use to course their magic. But especially on the front half of this album — and the first two tracks in particular — there is a "presence" to the voices that puts them seemingly right in front of you. But for the vocal percussion (more on that later), you might swear you were hearing them live, if a live performance could be edited so expertly to eliminate any wayward tuning, mic pops, extra breaths, and the like. The knowledge that this is a studio recording is unmistakable, and yet, the humanity and vitality of the live voices come shining through.

What's more, I can't remember the last time I felt compelled to make mention of the placement of individual voices and/or voice parts and/or ornamentations in an a cappella studio mix. But here — and most notably on the opener, End of Time — it's fantastically well-conceived and adds to the live element described above. Close your eyes and you can almost picture the configuration of the group singing the song, so consistent and tasteful is the panning.

As for the vp, sure, it's sampled within an inch of its life — which perhaps slightly undermines the otherwise most welcome sight of seeing two female drummers listed among the six total. Fact is, there's nothing distinct about the execution of the vp on one or another track that would allow me to sing the praises of its execution by this person vs. that person. But what I can say — somewhat uncharacteristically for me — is that the lack of "humanity" in the vp rarely bothers me. So expert is the treatment of all the other voices, that the vp is (mostly) left to do what it's supposed to do — support and enhance — and not distract or overwhelm.

I could go on and on, but I think I've made my point. If the most prominent landmarks on the timeline — or at least, MY timeline — for gold standards in collegiate a cappella production (and the word "collegiate" is probably extraneous by now) likely start with Bill Hare and continue with Ed Boyer, it's not really a stretch to suggest that the gents of Plaid Productions are nearly, or already, alongside. And an already-gifted group like the Amalgamates — and any other groups fortunate enough to retain the services of Plaid Productions — are very lucky to have them.

If for some reason you've lost track of the Amalgamates — it's been a whole three years since we've reviewed one of their albums here at RARB — Watch The Stairs confirms that this group still maintains the same high level of quality that we've come to expect from them for over a decade.

There are a lot of subtle touches on Watch The Stairs that elevate the album from good to great: we've all heard tons of Pray covers, but the end of this version swells into a crescendo using a lush arrangement with layers that overlap and resonate and sound like the booming echo of a choir in a church building. The beginning of Want You Back captures the energy and tone of HAIM's original, and the rest of the song is stunning: the 'Mates both let loose and reel in their dynamics and layered harmonies in a way that keeps the song moving and flowing. In My Blood has a slow, smoldering build that opens up into a booming chorus and then collapses back to a heartfelt murmur, refusing to let the song fade into the background.

There's just so much emotive phrasing here; the opening lines of Water Under the Bridge and the subtle sustained notes in the background in Searching for a Feeling are just two examples. Arrangement after arrangement, the 'Mates show that they know how to put together an a cappella cover, paying attention to the dynamics in the song as well as individual phrases and sections. That attention to detail is what makes Watch The Stairs such an enjoyable listen: the group knows how to tell a story with a song, and it's impossible not to listen intently when they do.

Watch The Stairs streams on Spotify.