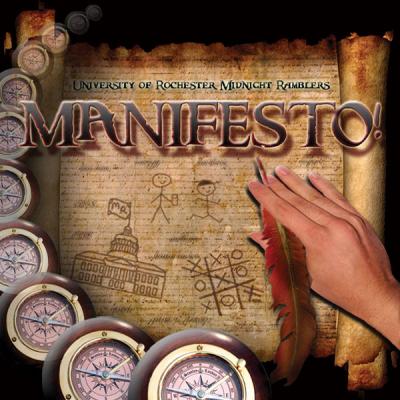 The Midnight Ramblers sound nice but not great, making Manifesto! more of a suggestion rather than a declaration. Part of it's lousy repertoire — pretty much all of these songs are dull and/or overdone. But part of it's a combination of mood and autotune that leaves me sympathetic but unmoved.

I Write Sins Not Tragedies is a really neat arrangement, by Dave Soson, and the song starts the album off with a bang. But oh, what a dreadful song! This is not the Midnight Ramblers's fault. And they perform it well. But as a song, separate from the performance, it's a loser, particularly on repeat listens. Such a shame — the textures and tempos are great, the energy fun.

3x5 is the most likable song. The arrangement is on the simple side; it's mostly a bunch of studio-shined block chords. But the Tony Vargas solo is warm and affecting. I liked it better and better with each listen, and I think the song stands up well to everything else on the market.

As for the rest of the disc? Ho-hum. Question! sounds a little pokey compared to Off the Beat's smashup version of the same song a few years back. Fix You is solidly average. Open Arms sounds a little anemic, again in comparison to the acappellaverse pantheon. And none of the other songs caught my ear, as compositions or as performances.

This group of singers is talented and rehearsed — with better material, they might have stood out. Or maybe with more transcendence, the track list would have mattered less. As it is, Manifesto! is just one more nice enough album. Midnight Ramblers fans should enjoy it, but the rest of us will probably pass it by.

When listening to a cappella, it's difficult to discern if it's a great group you're listening to or the work of a great engineer you're listening to. The Midnight Ramblers's latest album left me unable to answer that question. Their latest release, Manifesto!, is chock-full of energetic, driving songs intermixed with ballads to somewhat soften the blow of the rock-out repertoire.

Manifesto! has two volume levels: loud and louder. When singing a love song like Open Arms and your "doo doo whoa" syllables are louder than the soloist, it's a problem. In addition, a common theme I found problematic with this album was the attack on the syllables. The translation felt like: "Hey, let's sing these words as loud as we can no matter WHAT WE'RE SINGING!". Whether this was a direction the group gave engineer guru Bill Hare or a decision Bill made, it's hard to tell. In addition, the album is horribly devoid of dynamics. You can record parts and build in faux dynamics that sound very realistic, though I prefer the real thing.

Tracks where The Midnight Ramblers shine are the testosterone-driven, hard rock songs like Question! and I Write Sins Not Tragedies. Both songs have terrific layering in the arrangement and lots of raw emotion from the soloists. I was pleasantly surprised to hear a version of What Goes Around...Comes Around that was not a literal interpretation of the Justin Timberlake original. However, sections of it were a bit loud, such as very cool, rolled "gun gun gun" chords being dominated by other sounds in the mix. You Are Loved (Don't Give Up) was completely out of place on the album; this isn't to say groups need to stick to one kind of repertoire, but if you're picking a cheesy Josh Groban tune, you need to sing it thusly. You can't attack syllables like "zhun" too harshly when the effect appears as if it's to be more ethereal than biting. Luckily, Matt Myers as soloist believes what he's singing and projects the song's meaning to listeners.

From a production standpoint, the tracks are clean, balanced and rich, but throughout the album, the vocal percussion mixing sounded like messy static (imagine the buzz you hear when scrolling between radio stations in your car). The Minstrel's Prayer was full of this and the vocal percussion greatly hindered anyone's ability to enjoy the great chords and overall song. The closing track, Beautiful Soul was a bad attempt at fooling the listener into a "live" track with canned audience noises in the introduction and a different approach to the mix. It felt awkward and out of place compared to the rest of the album, and I didn't understand the intentions of a quasi-live track (it was recorded in a studio) to close the album.

The Midnight Ramblers are definitely a high energy group, though lots of energy does not always equal success. Energy should not mean "sing loudly and attack phrases like you're the most important part in the song". They can learn from the less-is-more adage on their ballads and should try to hone the excited energy. This is still a well-produced, entertaining album with smart arrangements, solid soloists and repertoire that exemplifies the group's love of energetic performances.

Manifesto! is the sixth album by the Midnight Ramblers to come to RARB since 2001 and the third of their albums to come across my review desk. For old times's sake, I read through my "RARB review history" of the Ramblers (and their more recent reviews, all of which were lackluster). Manifesto! is miles ahead of where the Ramblers were when I last reviewed them.

I found Manifesto! to be thoroughly enjoyable and eminently listenable. Does it raise any bars or push any envelopes? No. Does it ignite that ever-brewing controversy over how much production is too much and really, what is a cappella these days? No. This is just a solid, male collegiate a cappella album of covers of an assortment of male artists (Josh Groban, John Mayer, and Justin Timberlake among others).

They throw another Fix You onto the collegiate cover pile, but instead of the Fray's first single Over My Head (Cable Car) they go with its second (and the first a cappella version I've heard): How to Save a Life. As I wondered why they chose to sing Teen Beat cover boy Jesse McCartney's Beautiful Soul they slyly drop in the words "stop Jesse" on repeat in the background. My husband's speculation is that the young women in college these days are of the age to be former fans of Mr. McCartney.

The arrangements are contributed by various group members and are uniformly good. The men have a tight blend and pitch isn't an issue. The energy is high and it is easy to tell that the Ramblers enjoy singing together. The soloists are all competent. If there are no mind-boggling high points, there are no low points.

The production is not as slick as some of the other male collegiate albums that are generating a lot of buzz. Here, the effects happen where they are needed (i.e. the "harder" songs like System of A Down's Question!). They achieved a well-deserved BOCA 2008 track with I Write Sins Not Tragedies, and I'm sure What Goes Around...Comes Around was another contender. Let's hope the Ramblers continue on this upward trajectory.