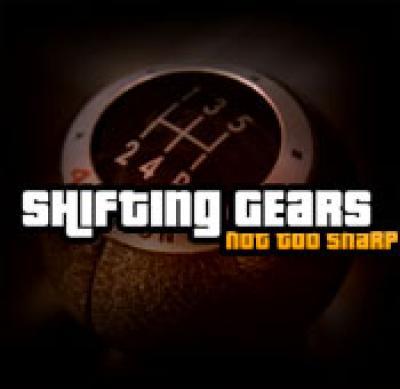 You'll love the sailing tenor on What Hurts the Most and immediately after, the smooth baritone on I Melt With You. You'll love the angst-ridden dismissive attitude on The Underdog and easygoing party vibe of Streetcorner Symphony. You'll love the piercing intensity and ultimate Supertenor™ power of Gone. You'll love the consistently full bass and smart, effective arranging. But will you love Shifting Gears?

Careful listeners may be frustrated at NTS's inconsistent rhythmic inaccuracies. Song after song moves from perfectly in the pocket, to flat out rushing, to accurate but lacking feel and back again. You may not like the occasional collegiate syllable choices ("jen"s and "joh"s, etc) — though one must at least give credit to NTS for not hitting us over the head with over-precise enunciations of distracting nonsense. You may note that some of the songs seem to hang out in a middle zone of dynamics, letting the opportunity for explosive change slip away.

But, to answer the question, yes; you will just love everything about Not Too Sharp, deliberately overlook all flaws and simply join the awesome party which is Shifting Gears.

The album is entirely kick-ass. But if a standout moment must be chosen, it's Black Water. Since the dawn of time (1975, to be precise), a cappella groups have listened to and loved The Doobie Brothers' first number one single. (Listeners may have an easier time recalling the song from the lyrics, "I'd like to hear some funky Dixieland, pretty mama come and take me by the hand".) Like untold Journey songs, classic eighties hits like Mr. Mister's Kyrie, and En Vogue's nineties chart-topper, My Lovin' (You're Never Gonna Get It), Black Water contains that ultimate musical trump card: the a cappella break-down. This arranging device has probably been as responsible for creating aca-addicts as innovators like Bobby McFerrin, the Flying Pickets and The Nylons. Yet successfully adapting this particular classic to a strictly a cappella performance has eluded generations of arrangers. Until now. Not Too Sharp solves this Riddle of the Sphinx with a head-turning arrangement packed with creativity, maturity, and deep southern funk. My only criticism of this arrangement is that it ever has to end.

Great song choices fueled by full production and killer leads. There's something special, something compelling about Not Too Sharp and it's been captured on Shifting Gears. This one is well worth owning.

Shifting Gears is the second recording by University of New Hampshire's male group Not Too Sharp. The album is a respectable sophomore attempt at presenting the whimsical and fun-loving nature of the guys in the group. It is also filled with pretty standard fare of 21st century men's a cappella. You'll enjoy Shifting Gears if you happen to like the gee willickers approach to collegiate male a cappella: adequate but not perfect musicality, fun but uninspiring arrangements, and earnest but not spectacular lead singers. Shifting Gears doesn't so much approach a cappella singing from a new angle or speed, but could be described more aptly as "sitting in idle".

In an interesting change of course, instead of opening with the strongest song, the album is tracked to build up to the best song in the middle of the disc with a quick descent back into mediocrity before finishing out its journey in a roller coaster fashion of likability. The first few tracks are just like pulling out of the roller coaster's passenger lane with a quick yank of the chain out of the gate (Streetcorner Symphony), the dreaded chugging of the car as your coaster begins its ascent (Take Me Home Tonight), and that stomach-churning anticipation as you approach the last few feet before reaching the top of the mountain that begins the ride (Draggin' the Line and What Hurts the Most).

I Melt With You is the pinnacle, like an extended precipice on said roller coaster. We get an immediate high as the group gives the most conviction to any of the songs on the album. The tuning and blend is spot on, the drumming sits in the pocket but also works as a driving force to propel the uptempo song in all its bouncy glory and there is dizzying excitement throughout the execution of the arrangement. The enjoyment of the performance races through the speakers.

To continue the metaphor and end the review, the rest of the tracks travel up and down along the course building into an urgent expectancy of what's to come with the closing track Gone. With a little more focus on strengthening their musical skills and solo presentation, Not Too Sharp is on a trajectory to stardom.

Not Too Sharp, an all-male a cappella group from the University of New Hampshire, has produced a competent album with their third release, Shifting Gears. Nothing on the album offends the ears and the whole experience is quite pleasant. If I don't sound enthusiastic, it's because that is the problem at the album's core; it never achieves anything above "good" or "enjoyable".

So, let's deal with the obvious positives first. Not Too Sharp's sound shimmers with bright, tightly locked chords and expansive reverb. Soloists, who are very strong for the most part, perform the songs with conviction and charisma. The arrangements aren't particularly inventive, but they're pretty solid and don't fall into typical a cappella arranging traps (except poor syllable choice, which plagues background lines in several songs). The blend and tuning are strong, with no noticeable intonation problems plaguing the album. The group also infuses the proceedings with earnest energy, and songs like Streetcorner Symphony and Gone explode with color.

What's missing? Nothing big, just lots of little things. Five years ago, this album could have been considered excellent, but each year the bar is raised progressively higher. The aforementioned syllable issues pop up on several arrangements (Take Me Home Tonight, Draggin' the Line, The Underdog). The soloist on I Melt With You sounds uncomfortable with his own performance. The leads on Black Water battle for dominance with the backgrounds (which sound fantastic, incidentally). More melancholy songs like Chasing Cars and Happier lack the drive and energy of the uptempo numbers. Gone, while an otherwise fantastic song, has balance issues in the chorus between the soloist and the backgrounds.

Shifting Gears is a good effort from Not Too Sharp, and it holds its own against its a cappella contemporaries. It's not groundbreaking or innovative, but it's a collection of good covers performed and produced with skill.