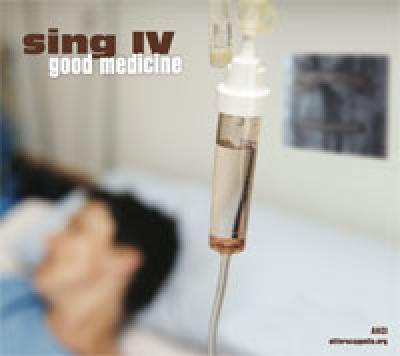 Sing IV: Good Medicine is the latest in the progressive a cappella collection series produced by AACI, the Alliance for A Cappella Initiatives. As is to be expected, the overall improvement throughout the genre reflects nicely in the quality of the songs. For those with a love of dramatic, electronically enhanced contemporary a cappella, this collection is a sure winner.

From choirs to collegiate groups to pro groups, Sing IV seems to have it all. Yet, there is in fact a surprising similarity in the overall sound of such a wide range of material. The biggest differences are those of gender and language. But eliminate that, and stylistically and sonically, baSix, the Danish all male sextet sounds surprisingly like the 15 person UNC Clef Hangers which sounds a lot like most of the rest of CD.

Of course the careful listener will have no trouble discriminating one from the next, especially after multiple listens. But considering the breadth of this musical world, there's an unexpectedly familial resemblance that dominates here. It makes for an extremely cohesive listen, but a strangely disconcerting commentary on the survival of personality in contemporary a cappella.

Every track on this release falls in the "5" range as compared with the rest of the a cappella universe. However, there are some gems that shine even more brightly.

I found the Tufts 'Bubs Digging In the Dirt to stand out for emotional intensity and for arrangement. The 'Bubs found a way to add to the original while remaining true to its spirit. They do this not only through rich harmonizations, but also through a judicious use of space. And they never fall victim to the collegiate a cappella's ubiquitous use of distracting syllable choices.

Fork's My Sin stands out for originality and (though this may sound funny) very cool use of whistling as a textural element. I wasn't always thrilled with the affected (not effected) quality of the lead's English. But for the most part, the energy and creativity far outweigh that minor awkwardness.

Magic Tree stands out for a blend of energy and sensuality. Groups are often choosing one or the other and Elon University's Sweet Signatures find that elusive middle ground that makes one want to both dance and ... court.

The McLemore Brothers On the Edge stands out for pure radio-readiness and perhaps also for its mere tenuous resemblance to recognizable a cappella. It's the most electronic of this collection (which is saying a lot since the entire collection is fairly well enhanced to begin with), but still a track with heart in its lead.

And finally Transit's Whispers stands out for pure range — timbral, vocal, emotional and dynamic. This one should be a learning track for leads looking to push the envelope.

SING IV is an excellent collection and at 20 tracks, it's a terrific bargain as well.

Not a penny of your money is wasted when buying Sing IV. It's not a question of if you should add it to your collection, rather how soon you can get it in your hands. If I had to describe a theme to all of these tracks, it's a driving, drone-like rhythm in most of the tracks that keep a cool, chill-out feel encompassing the entire album.

With hundreds of submissions, it's not an easy feat to select only 20 tracks. The selection process for groups is a much easier task; decide what songs you'd like to record, and create an album. The credit belongs to Thomas King for both choosing fantastic tracks and sequencing them in an order that flows well with powerful energy on some tracks, focused intensity on others, and combinations of both for the true heart-stoppers.

There are wonderful world music elements and cross-cultural inclusions on Sing IV, including a Hebrew pop song from Six13, a Gaelic lullaby from Stanford Talisman, and a bass-driving Indian track from the University of Pennsylvania's Penn Masala.

There are several underlying themes that make nearly every track on Sing IV a master class in a cappella recording:

Clean production. This is a heavily produced compilation, the general direction and consensus for all modern pop a cappella, and each track reflects this attitude. Groups still need to pay more attention to recording dynamics (not just pitches and syllables), as they're hard to reproduce in a studio setting post-production.

The arrangements keep the listener interested. Having too many verses and choruses sound identical can ruin anyone's favorite song. Groups on Sing IV often start with thinner arrangements, have a direction and purpose to build the songs to.

Truly jaw-dropping tracks include: On The Edge by the McLemore Brothers (who knew a two person a cappella group could sound like this?) with great synthesizer-like sounds and a catchy pop hook, My Love with a sexy groove and hypnotic beats, and Can't Get You Out Of My Head, a favorite from the baSix album reviewed in 2007.

It's hard to imagine that subsequent Sing compilations can top this incredible highlights disc from some of the best professional and collegiate groups performing today.

As far as compilations go, there have been a handful over the past decade that have tried to step up to the plate and hit the ball out of the park. You'd think it'd be easy to pick the best of the best (or the best of whatever was sent to you) to create a head-turning collection for all to clamor for. You'd be wrong. Just as the general music listener struggles to put together a carefully crafted mix tape for their best friend (I guess we can call it an iMix now), I imagine it's tough going to create a mix of songs catering to the tastes of thousands of a cappella listeners across the United States and beyond.

To be perfectly honest, I have subconsciously ignored the Sing compilation up until the point it showed up at my doorstep in its attractive, eco-friendly CD case, patiently waiting to be picked up and paid some attention. Whether it's been my disappointment in compilation albums of recent memory, or the post-collegiate lull my a cappella soul has been experiencing lately (thank goodness for the CASA league!), the Sing series hasn't even been a blip on my radar screen. Apparently this has been my yearly personal loss as Sing IV: Good Medicine has hit this one out of the park with one effortless and powerful swing that is beautiful to watch sail over the fence.

If there's a general musical vibe resonating throughout Good Medicine it's an underlying thump of bass, as if the CD can't contain the party going on inside. (Thump, thump, thump.) As you get close enough to grab the handle to the front door, the crowd begins to scream and sing along as you hear Basix take control of the stage with Can't Get You Out of My Head. (The turn-table scratching on this track is unbelievably realistic.) The Clef Hangers of UNC continue the party with the Justin Timberlake track My Love, through the most seamless transition between songs on a recording I've ever heard. For all I knew Basix was still singing. This level of detail and connectivity is unheard of within compilations.

I'm not one for critiquing album art, but the Sing crew has really created a nice theme throughout their packaging. From the four-leaf clover on the CD, to the various other images of "four", they've taken an imaginative approach to a recurring yearly compilation.

A good majority of the tracks featured on Good Medicine have an R&B/Soul influence. As much as this helps intertwine the album as a whole and give it stability, it really puts the pressure on the groups differing from this style to stand out. For the most part, they do, with Talisman of Stanford bringing us into the Gaelic realm through Ohureo, University of Maryland's Faux Paz belting out an Evanescence-like Heaven's a Lie, and Transit's worldly journey through their original song Whispers. The "Where's Waldo?" of tracks that is not like the others is New Hymn by the Whiffenpoofs. While the song is potentially gorgeous (adding some diversity to the compilation), the soloist has such a difficult time navigating back and forth between the different registers of his voice that it makes for a tough listen as one imagines what could have been.

Most of the stand-out tracks on Good Medicine left me feeling dirty, and while I'm not sure what that says about me, I'm positive it has helped carve out Sing IV's identity.

Mama's Room (Washington University's After Dark) may very well be the best track here. Great arrangement, great solo, and a message that is sure to resonate well with anyone who is not a part of the 40-Year Old Virgin crowd.

Diggin' in the Dirt (Tufts University Beelzebubs) — Is it possible that an arrangement can sound incredibly fresh through the syllable "boo"? The 'Bubs certainly make a case for it here.

Ready For Love (Hyannis Sound) — Up from the mist of Cape Cod, the mythical summertime collegiate all-star group takes this India Arie song to epic proportions with a slow and deliberate build that's sure to satisfy.

Can't Stop Thinking About You (Firedrill!) — It's fitting that a group which exhibits such joy and passion in their singing should close out an album entitled "Good Medicine". Firedrill! is everything you dream of a cappella being in your head but never quite get the opportunity to be a part of. Now's your chance to participate.

This review could have just as easily been condensed to, "Wow. Go buy this CD!". So, in the omnipotent words of Ferris Bueller I say, "You're still here? It's over. Go home. Go!" Seriously, buying this CD should be first on today's To-Do list. I'm already counting down the days until Sing V.