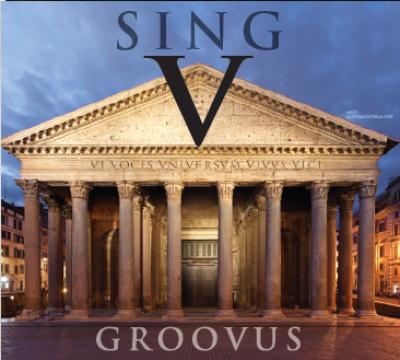 Groovus brings more variety to the Sing compilation than we've heard in a while. The track scores pretty much tell you who brought the whole package and who needed to step things up that one extra notch. This often aligns with age and experience, but not always, as groups like the MIT Logs ably demonstrate. In the end, from pros like Naturally 7 and Duwende to collegiate groups, Groovus delivers some good listening and is well worth the purchase price.

This is just the kind of album that inspires an old style RARB review with a track-by-track commentary — often in sentence fragments. I won't hit every track like they used to do, but I think the initial reactions to a few noteworthy songs on Groovus goes a long way toward painting the picture as a whole.

Wall of Sound runs the danger of being disasterously cutesy. It's a song, sung part by part, about building a song part by part. Ahhhh! But Naturally 7 is just such a talented group, and the arrangement and lyrics are so innovative, that one forgives the set-up and enjoys the groove.

Ghost Files' Come Back Home starts a little bit studioized. The blend sounds artificial, but then when they begin singing lyrics in earnest — and the sound is absolutely earnest — it's easy to get swept up by the emotion of the piece. If anything, it ends too soon.

When Unleashed begins the listener has one thought: Rescue's lead sounds exactly like Go West's Peter Cox! (Who? Remember the 1990's King of Wishful Thinking from Pretty Woman? That's who.) The song could have been composed by Sade — it sounds sexy, soulful, and a little bit dated. Overall it's still very enjoyable.

Mauf is an Austrian beatbox trio that performed in the US at the 2008 ECS in the DC area. Live, they are beyond outrageous. Instant aca-rave party. The recording of Freedom is undeniably good, but falls short of capturing that boundless energy and abandon that wowed the audiences in 2008. I wonder if this is one of those groups that will always have to be seen to be appreciated. I hope not as this is one of the most exciting groups I've heard in ages.

As the Duke Pitchforks' As You Go begins, immediately the world of musical texture comes alive. Subtle electronic effects are layered with some gentle chords. But when the lead begins it's game over: all ears are tuned to the craft of Andrew Booth as he shapes the dark lyrics of this song. It's a delightful mix of Dead Can Dance, Massive Attack, and Jeff Buckley that ends far, far too soon.

As it happens As You Go is followed by Mama Who Bore Me, which deserves more extensive commentary and for this I refer the reader to the review of Divisi's release, Roots.

Lilli Lewis' Sanguine Song is the next piece that really moves the listener. Phrasing, soulfulness, and grit all make this piece come to life. The sound is like a female Bobby McFerrin, but with lyrics one might expect from a group like Sweet Honey In The Rock. This is one of the most raw and exposed pieces on the album.

Perhaps the real shocker on the album is MIT Logarhythms' Blower's Daughter. Since when do college groups put this much originality and expressiveness into a lead? It's artistry pure and simple with a beauty that will survive and move listeners far beyond the day or the decade. The backup syllables are complete crap, unfortunately, but if I try hard enough I can pretend that those "jin jotta joes" aren't there. That kind of arranging annoyance is the only thing holding back a raging 5. The best lesson of this song: Emotion is more important than perfect accuracy.

Stronger shows Rutgers Casual Harmony committing to rap as an art form and not a joke or karaoke piece. A cappella groups have had a noticeably uneasy relationship with rap for over two decades now. Only recently have we heard groups really embrace what rap has to offer and deliver it with the attitude it demands. What would have improved this track is some of what a cappella can offer to rap — powerful dynamics and musical phrasing. But there's no denying that this track just makes you want to dance.

Stanford Harmonics's The Sound of Silence is as close to a cappella performance art as I've heard from any collegiate group. Like a mismatched patchwork of sonic imagery that somehow takes on a cohesive meaning despite its cacophony, this moody and brave arrangement will have you talking about what makes for real originality.

Wrapping up with Duwende is a perfect choice. One the most original pop groups in a cappella for the last decade, Young Leaders of Tomorrow is innovative, rockin', and even a bit haunting — exactly what the best of Groovus has to offer.

Take some of the most respected names in a cappella. Then allow them to compile the best songs the a cappella world has to offer on one album. The result is what you would expect: Sing V is a masterpiece.

I have to admit Sing is my favorite of the compilations, since there are no boundaries. It's got U.S. and international groups. It's got high school, collegiate, and pro. It's got men and women and a variety of genres. It's over an hour long, and it's (almost) all a pleasure to listen to.

Sing V highlights three things. First, the gap between pro and collegiate a cappella, while still apparent, is closing. Groups such as UGA Noteworthy, the Logarhythms, and The Pitchforks can hang with Naturally 7 and Duwende and not get completely blown away. Even high schools are creeping up, though I did find She Will Be Loved the weakest track on the album.

Second, a cappella originals are almost always better than covers. Better written, better executed, and more fun to listen to. Using the voice (and computers) to imitate instruments will never match good songwriting that takes advantage of the voice's unique sound and emotional range. My favorites on Sing V include Wall of Sound, a groovy tongue-in-cheek play on a cappella; Move On and As You Go which are haunting and ethereal; Two Sisters which showcases the moving power of harmony and folk song; and Young Leaders of Tomorrow which is incessant and fun.

Finally, no matter how good the component parts are, best-of compilations sound musically disjointed and patchy. There's so much on Sing V, and it covers such a wide range with no overarching theme, that it's hard to follow. Everything is so consistently good it becomes hard to appreciate the nuances. Perhaps the format is perfect for those weaned on the $0.99 iTunes download, but sometimes you want a group for an entire album. But since everything is so good, this is but a minor complaint.

ACCI's Sing series has been consistently excellent, and Sing V is no exception; it cements Sing's status as the "must have" album for the a cappella connoisseur. It's one of those critic's dreams where, instead of focusing on what could be better, I can just sit back, relax, listen and enjoy.

If you're looking for the best collection of a cappella music this year, you've found it. Sing V continues the series' strong tradition of collecting the very best in a cappella at all levels, from high school right on up to the pros. Everything is great, everything hangs together well, and this is very good news for the future of the art.

My favorite track has to be Divisi's Mama Who Bore Me. It's the perfect blend of power and grace on record, holding back just enough until the end so that the listener is left feeling uplifted. The Chordials' take on The Moment I Said It is also pretty astounding. The chords that punctuate the verses are gorgeous, and the overall tone of the track is heartbreaking. Kudos also to Brandon Williams of Eleventh Hour whose solo on Maroon 5's She Will Be Loved is mature beyond his years. All the other tracks are just varying degrees of awesome.

For the avid acafan, Sing V reveals some cool new trends as well. The tracks presented here indicate that the best groups have taken the next step from the uber-production that was the Code Red era, successfully synthesizing it into a more vocally based sound that loses nothing in imitation or style. If you don't believe me, look no further than track one. Naturally Seven's Wall of Sound expertly marries traditional close vocal harmonies with studio effects that enhance the color and presence of the instrumental imitations. Backing off a bit on the effects allows for a bit more emotion (Move On, Come Back Home), which is ultimately what elevates these songs to greatness. Aspiring groups, take note.

What else can I say besides "buy this album"? You won't find a better collection of twenty tracks that display such incredible musicality or emotional range. At least, not until Sing VI, anyway.

To order this album, visit AACI or A-Cappella.com.