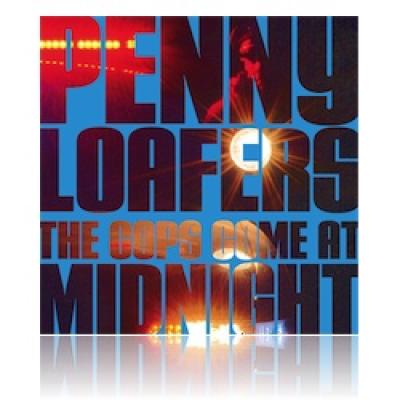 It's a great day to be a Penny Loafer. Even though the group's latest release The Cops Come at Midnight isn't receiving across-the-board top scores, it is still an intelligent and interesting listening experience. I may be off base, but it always seems that as artists, this co-ed group from the University of Pennsylvania takes great effort to develop a fully conceptualized set list prior to stepping foot into a recording studio. The way the songs flow into each other, and the thematic ties makes a credible story arc. It's just become an intriguing exercise to figure out what's coming next sonically while listening to a Penny Loafer album.

But that single artistic achievement isn't enough to propel the album into the must-have echelon of listening recommendations. While the women of the group continue to be amazing, most of the male soloists struggle to convey that same capability. The opening track Chase This Light is a very exposed example. It's a solid track, but lacks a lot of firepower from the soloist to give flight to the song and the remaining tracks on the disc. Lead with the ladies next time around. Uniformly, the tracks featuring the women in the group have a stronger presence and conviction, especially Consider Me Gone, Almost Lover, Roses, and the closer Soon We'll Be Found.

Damn, those last two tracks are UNBELIEVABLE. Both Roses and Soon We'll Be Found elucidate the failings of the preceding tracks and the comparisons that make the rest of the album so average. I'm a recent convert to the all hail Sia club, and the Penny Loafers come closest to offering a perfect cover of one of her songs that I've head.

What the guys do have going for them is a propelling drive in the rhythm sections. On songs like Memory the basses are very money. They possess this lush sound that rocks you to the core. The tenors and baritones add effective coloring to the rhythmic lines. And the drumming throughout is in the pocket and non-distracting. The only time I felt a slight friction among the soloist, the background, and the drumming was during Memory. The soloist rode too hard on the backbeat whilst the rest of the group was like a horse at the gates of the Preakness Stakes.

The arrangements are fairly standard, staying out of the way of the soloists and the block most of the time. That should be looked at as a compliment considering we're just now riding the tail end of the period where every arrangement had to make itself known even moreso than the song's performance. You don't have to throw every ingredient into the pot to make a good stew. Less is often more. It was weird to hear the beginning of Who's To Say and not think that I was about to hear With or Without You; not sure if that was intentional in the original or a subtle twist by the arranger.

Well, because this is the state of recorded collegiate a cappella today. With easier access to recording equipment and processes, the bar has been raised as to what a disc should sound like. Overall, the album is slick and polished from a production standpoint. The background is fat and juicy. The drumming rocks. And when the talent is there some of the soloists can wail! The recording could be considered good, but it's also what the average a cappella album sounds like nowadays. Granted, it's a high average, but average nonetheless.

So The Cops Come at Midnight as a recording is fighting an uphill battle. The group is at the forefront of a large mass of performers just trying to find their breakout point. Tracks like Roses and the stunning Soon We'll Be Found is providing the blueprint for that next step. Creating more sonically challenging tunes like these will put the Penny Loafers' taste on everyone's lips.

The Cops Come at Midnight is an album that I can tune out. For an a cappella album, that's a pretty big problem. Nothing about the Penny Loafers' music really grabs me. With the exception of very few moments, songs come and go without leaving much of an impression. Why?

The problem begins with the track list. There's a fair bit of angst, most of it pretty slow (Soon We'll Be Found, Almost Lover). To hold my focus with this kind of music, you need to make me believe what you're selling, emotionally. Unfortunately, the Loafers' delivery leaves much to be desired in this area.

Soloists are fine, but with this music (and this much of it to boot), fine isn't good enough. Case in point, the female soloist on Almost Lover stays roughly at the same level of intensity throughout, and lacks phrasing at the climax of the song where I really wanted her to sell me on her story. Her tone is very nice, and the song suits her voice — I just don't believe her. The men of the group tend to tackle the few more upbeat pop/rock tunes (Chase This Light, Let Me Take You There). While they fair better for lack of needing as much emotional depth, each one still has a lot of that familiar karaoke sound, cheating the high notes and missing the intensity that these songs demand.

The soloists might be able to get away with more if the backgrounds stepped in to add interest, but it just doesn't happen. While the leads are lukewarm, the backs are downright cold. Even such sleepy singing might be forgiven if the arrangements gave the group more to do, but it's all pretty standard stuff at this point. Lots of familiar syllables, and very few standout moments.

It sounds to me as though the Penny Loafers would benefit from a new producer to bring out their dormant energy and emotion, and perhaps also an arrangement editor to help add interest to their music for the studio. As it is, The Cops Come at Midnight is just ok, and I think this group can do better.

One thing is particularly striking about the UPenn Penny Loafers' The Cops Come at Midnight: this group's sweet spot is the mid-tempo pop/rock song. The group has such a swaying energy and warmth on these songs; the first three tracks here all really show off the group's focus and drive. It's when the group either speeds up (Memory) or slows down to a mellow ballad (Fallen) that its energy either becomes grating (in the former case) or lags to the point of sleepiness (in the latter).

Still, on those mid-tempo songs the group really excels. Let Me Take You There in particular is a standout of the album: the soloist is fantastic, the arrangement really grows from verse to verse, and there's a subtle arrangement trick with Take On Me that gives the song an interesting texture without being flashy or gimmicky.

But what I really want on this album is more extremes: more whispered quiet moments and more booming louds. The group tries to do this sometimes with its arrangements, but just doesn't take it far enough; Who's To Say builds and retreats, but it doesn't convey the story arc that it could. There are a few other issues here — Who's To Say sounds like a stretch for the soloist's range, and the "joh-noh" syllables on Roses are a little too literal. But even those choices wouldn't be such a problem if the group had just spent a little more time focussing on creating more drama within each song.

In essence, this consistency of volume and tone makes The Cops Come at Midnight a really great make out album: there's a lush warmth to these songs that sets a perfect mood. Still, that's hardly a glowing compliment: there's also not a lot of variation here, and this is a group that has so mastered the notes, blend, and execution of an arrangement that adding in some dynamics or building arrangements should be a piece of cake. Sure, the Penny Loafers sound damn good on this album, but I really want them to do something to grab my attention and pull me away from whatever I'm doing — even if I'm hanging out with a total hottie while the make out album of the year plays in the background.