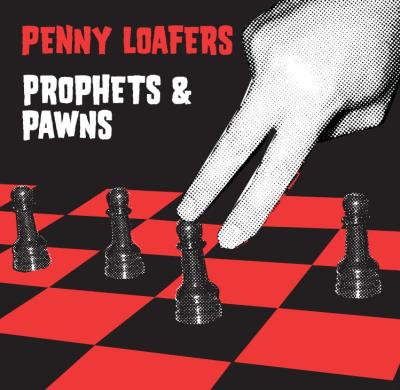 The Penny Loafers are pretty darn good, but they don't quite win you over. I found Prophets & Pawns to be a little too abrasive, a little less warm than ideal. One of those albums I sort of wanted to like more than I did, but then again I didn't.

There's some fine singing on this disc. Hurt has the best intro ever. It's a beautiful unaccompanied wordless soprano, beautifully produced, and leading gracefully into the rest of the song, which is pleasant if not memorable. In contrast, Waiting For My Ruca had 20+ wasted seconds of electronica noise right up front. I loved the rest of the song, but I will probably never listen to it again because the intro is so annoying.

Some other production choices also caught my ear. Gold Lion has that thing I've noticed on other albums but never pinpointed until now - some kind of background effect that makes me look up to see if my cellphone is ringing. It happens in the same places every time, and it catches my ear no matter what else I'm doing while I listen. My cellphone rings enough — can't you studio engineers let me take in some music in peace?

Prophets & Pawns has a nice mix of up tunes and slow numbers, and a pleasant range of textures. At the same time, the album didn't always gel. At Last and Bed Of Lies had a softer, more blunted sound than the rest of disc. I dig contrast, but those songs — and to some extent The Predatory Wasp, which had a truly first-rate solo from Andy Dalzell - sounded kind of wimpy. Lithium and Hurt are slow songs too, but they don't sound as blurry. All five of those tracks were in the half of the disc mixed by Dave Sperandio, so whatever it was they did it on purpose.

This is a good album, probably the best I've heard from this group. But I'm hard pressed to say whether you'll like it.

I haven't reviewed a more aptly titled album in a long time. The Penny Loafers soloists are virtuosos laid atop a brick foundation of pedestrian backing voices. Bland arranging leaves an engaging track list shamefully underexploited, and the album suffers.

The prophecy of this album is the truly affecting presence of each soloists. Nearly every song reveals a soloist with shining presence and energy. These leads sing with appropriate style and tone, but it is their sense of voice that is remarkable. Each singer is evocative of the original artist, yet each brings a sense of unique personality to their performances. Gold Lion's snarly, sneering soloist will make you want more. Waiting For My Ruca features a captivating guy/gal duet with minimal harmonies. The earnest performance on How To Save A Life permitted me to enjoy this song that has been so thoroughly and utterly radio-killed. The light-voiced soloist on Samson entranced me with her airy, forward tone. Her immaculate pitch and white-washed tone render her voice into arresting yet accessible beauty. She impresses the song with her voice and style and punctuates the album. Equally prettily voiced is the Sufjan of The Predatory Wasp…. His voice is light and agile and the thoughtful miking brings him to within whispering distance of the ear. Throughout the album, gorgeous mike work and compression helps extract maximum beauty from each performance (particularly Samson and The Predatory Wasp…).

The real opportunity lost is that these convincing soloists too often must sing over backgrounds so simple that they are distracting. Four beat chord durations are annoyingly prevalent; the arrangers tend to sit on an open syllable block chord from measure to measure (How To Save A Life) or on predictable measure and a half durations (This Modern Love). You'll nod your head predictively and you'll envision the rehearsal pianist nodding off. Sometimes interesting syllables can liven up songs that brick like this, but most of the rock/pop syllables on Prophets & Pawns will be very familiar: "ahh"s, "ohh"s, their "j" variations, "jen"s, "juh"s, etc.

Several of these songs are good, even on the verge of excellence were it not for blocky arrangements and other distractions. Other distractions include moments of feeble mixing. There are a few "artificial keyboard" voicings, some very human tom drums and "pish!" snares, and bass lines that have too much octavizer artifact.

The prophets bring good news: The Penny Loafers have real talent. But the mediocre masses of pawns prevent the album from real excellence.

The radio dialing imitation at the beginning of an album has got to stop. Actually, it doesn't, but it sure has become very annoying and trite. The concept was innovative about a decade ago, but not so much now. Its usage did almost ruin my enjoyment of the opening (my favorite) track Waiting For My Ruca. While that's not the worst thing that I could say about Prophets & Pawns — the latest album by the coed Penny Loafers from the University of Pennsylvania — it did tick me off the most.

Vocally, the album is full to the brim with talent. Soloists never seem to rest on the melody lines, coasting through songs while simply trying to mimic the original artist. Even if you don't like everyone's voice, there is a specific quirk or emotive quality that makes you listen and take notice at least once. Most notably is Joanna Johnson's rugged wail on Gold Lion, Andy Dalzell's bubbly enthusiasm on Trains To Brazil, Dianna He's chilling top note that ends her devastatingly beautiful Hurt and Scott Hattis's silkiness on Fair. The group's internal tuning is great, but the balance amongst the sections keeps the blend from achieving excellent status.

The arrangements (or at least how they are mixed on this recording) and the lack of dynamics are still holding the group back. Most of the songs have these huge blocks of background sound, where each voice part is singing the same syllables with occasional changes by the basses and auxiliary parts. That type of arranging is fine for live performances as it provides a solid foundation for singers to perform "on top of". On the recording of Prophets & Pawns, these dull, repetitive lines are thrust into the forefront in the mix — often competing with and overpowering the solo lines. I'm listening to Trains To Brazil right at the moment of writing the review and it's a prime example of the problem. For a lot of the song all I hear is some variant of "din do din do, no" and "din din do no" that remains at the same forte dynamic throughout. I had to actively listen to not get distracted from Dalzell's solo, instead of living in the moment.

Strangely enough, the track that doesn't fall prey to this problem seems to have been arranged by the whole group — it's simply credited to "Loaf" in the liner notes. Waiting For My Ruca is dare I say it, sublime. I love the doubled solos as the male and female's lead voices mesh so very well together. The background is minimal. The bass is rich and captivating. James Lotta's percussion is spot on. How odd is it that the drummer gets credit when no one else does? That is a change. Two tenors scream the chorus. I'm just fascinated by the track. This is for a forum discussion, but I'm wondering if groups should be required to put the explicit lyrics warning on the front of their CDs. Probably not, but I know several DJs who would appreciate the warning. I was shocked when the f-bomb dropped.

The Penny Loafers are poised to make that next great leap in recording techniques. Prophets & Pawns is better than Quicksand though they both received a score of "3". "PnP" (lol) is a high "3", but because of the higher quality of recordings overall, the group is going to have to incorporate some stronger attention to musicality to make them stand out from the crowd. I'm putting them in check right now.