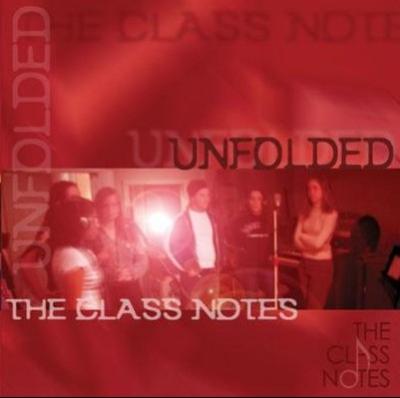 I was utterly charmed by this album and think it's terrific. But you may not agree with me. Pop music fans tend to frown upon the choral sound that won me over.

Classical training tends to be a telltale in college a cappella, a necessary precursor that gets rooted out of tone and timbre, while hopefully sticking around in the tuning. The Class Notes don't bother hiding their background — what surprised me is how well it all turned out. Sure, there's some vibrato in the background, but it's attached to such pleasing voices that it doesn't much interfere. The intonation more than makes up for it — how nice to hear such balance on such well-worn repertoire. The solos are good, the accents are good, and the sopranos generally soar without shrieking or killing the blend. Even the rhythm is good — sometimes square, sometimes not, but always consistent.

Uninvited is a brilliant arrangement — haunting, twisted, and beautifully executed by a star soloist and strong supporting cast. Meanwhile, Just My Imagination isn't ambitious or ground-breaking, but it has such an easy groove as to inspire dancing. The twin solos are terrific on top of an updated doo-wop background and a high descant that could have been horrible in the wrong hands. The Class Notes also have remarkable skill with lofty intros, which otherwise can be boring, bad or both. The album opening Here With Me features a lovely classical-style intro that segues smoothly into a more contemporary tone once the song is underway. And Silence seems tailor made for their touch.

There really aren't any big wastes of airspace. The arrangements have a lot of "doo" and "wah," as you might expect from a group like this. Also, a lot of the repertoire suffers from overexposure — it would take a lot to get me excited about A Sorta Fairytale, and St. Teresa is a nice song that long ago became a wholly owned subsidiary of Off the Beat. Once you've heard the explosion of the Penn group's arrangement, it's hard to get worked up about another pleasant rendition. At least the Class Notes come up with a suitably reedy solo for A Thousand Miles and a clear, rich duet of male voices on Colorblind.

Remarkably, many of the solos seem utterly free of the classical timbre that characterizes the backgrounds. This seems to be the reverse of most college groups, where thin background tones crackle behind the odd recovering broadway enthusiast. I found this album such a delight, and quite refreshing. Who knows? You might too.

In attempting to collect my thoughts about Unfolded, the fifth album from Cornell's Class Notes, I find it difficult to avoid cliché. "Almost, but not quite." "Missed it by that much." "Juuust a bit outside." "Close but no cigar" — all are phrases that cross my mind.

What makes this a bit trickier than the typical "good, but not great" album is that there are a number of elements on Unfolded that are in fact excellent, but, unfortunately, the whole is diminished by the sum of its parts.

On its website, the group bills this album as "a diverse collection of your favorite folk, pop, R&B, and rock songs of the past and present." This is something of a misnomer. The oldest songs include Yaz's Only You and a live bonus track of Sting's Fields Of Gold, plus Helplessly Hoping by Crosby Stills & Nash. What's more, while I suppose covering the Gwyneth Paltrow/Babyface version of Just My Imagination qualifies as "R&B", the vast majority of the tracks falls under alternative rock/pop with a definite preference for relatively mainstream acts of the last 3-5 years.

The two single biggest problems plaguing this album are the song selection and the production. First, song selection. There is no "kapow" track on this album; the closest thing to one is the penultimate Clocks. A few hard-hitting rock tunes with some edge would have made the mellower tunes all the more interesting instead of monotnous. Similar arrangements across tracks adds to this. Despite the multitude of talented arrangers with which the groups is blessed, it feels as though a common musical palette has been shared by all of the arrangers such that one songs blurs into another (compare St. Teresa on this album to St. Teresa on Off the Beat's 1996 album "When Mama's Not Around" and you'll have a sense of what I mean).

Then there's production. It's not bad. But the mix is so muddy that it almost feels like the engineer cranked up the reverb and left the room. The group has opted for an almost constant "wall of sound" approach that swallows a good deal of the interesting background lines and, in some cases, the soloists. On a waaaay too loud Only You the title of the song itself is almost unintelligible.

If you're fan of the track list, you're liable to like this album. The arrangements are often quite complex and challenging, the execution from a pure singing point of view is commendable, and the group has a solid, if not stellar, core of soloists (Lindsey Geddes was my personal favorite). I wish I could hear The Class Notes completely unprocessed. In the meantime I'd love for the Notes to vary their repertoire just a bit and to seek out a producer/engineer with a crisper, cleaner approach to a cappella recording.

In my book, and according to RARB's rating guidelines, fives are very difficult ratings to get. A top notch album is like a perfect storm of excellent musical fundamentals, creative arranging, polished and innovative studio work, and charismatic soloists who are supported by an energetic background. "Unfolded" is a good album and almost a great one. With some minor adjustments, The Class Notes could cross the cusp of fivedom and turn out an album that is, as RARB puts it, "top notch, shining, an example to us all".

For me, the letdowns on "Unfolded" are energy and creativity. As is the case with many hard-disk recorded albums, "Unfolded" sounds clean, crisp, well balanced, detailed, and slick. Such precise and accurate recording media, though, tend to distract groups from singing with the intimacy, emotion, and excitement of live performance. "Fields of Gold", the album's only live track, provides a perfect example. The group actually asked me not to review this hidden track, as it was of lesser quality. Not so — this track is nearly as good as everything else on the album AND it has intimacy and energy! I would prefer to listen to a good live performance over a "perfect" studio recording any day, and this song, hidden with shame at the end of "Clocks", is both a sign of the times and a great reminder.

The majority of the album's solo performances are not as charismatic as they could be, but neither are they boring; most soloists have warm, colorful voices beautiful enough and stylish enough to impress. A few soloists do excel. The solo in "Uninvited" is colorful, uniquely enunciated, and powerfully sung with an intimacy that builds emotion throughout the song. Build on this charisma, kids, and soloist fivedom is yours!

"Unfolded"'s arrangements are a mixed bag. Though all the arrangements involve good motion, interesting syllable choices, and well-balanced, warm chords, only a few build to a climax. Its almost as if the group found some arranging elements that worked nicely, put them in the first verse and chorus, then copy/pasted in ProTools. "A Thousand Miles" is active but overly repetitive. "Rendezvous", "Colorblind", and "St. Teresa" go nowhere. "Uninvited" starts moody and builds to a climax. "Wherever You Will Go" and "Tonight & The Rest of My Life" build decently. Differentiate verses/choruses and build them, kids, and fivedom for energy and creativity is within your grasp!

Finally, The Class Notes chose some good songs. Unfortunately, many others agreed; I've reviewed seven of these sixteen tracks on other albums. These tracks are all relatively new, but the group has clearly jumped on the "Here With Me"/"A Sorta Fairytale"/"Fields of Gold" bandwagon. I wish groups would try to sound different and good rather than the same and good. Since I have to review based on what I've heard before (and because of some arranging weakness), creativity takes a C. Sing great songs that no one else is singing, kids, and innovation fivedom is within your reach!

The Class Notes score a solid B+ on the a cappella musical basics of blend, pitch, rhythm, and balance despite moments of weakness. Mid-voices sometimes sit on repetitive syllables and chord roots until they stick out (Sugar, Fairytale, Helplessly). The basses sometimes stick out a bit and sometimes lag slightly behind downbeats. But the background singing is universally very good (the sopranos in "Clocks" are outstanding!). Bone up just a bit on the basics, kids, and you'll be heading for that 5.0, err, 4.0.

All in all, The Class Notes earn a grade worth writing home about. The group's ability to crank out 16 good songs shows a lot hard work and dedication. What about focusing on an album of ten songs that are both ProTools perfect and that move listeners, too? If the group brushes up on developing arrangements and putting the human spark back into its albums, The Class Notes' next album should ace any test I could give.

To order a Class Notes CD please visit their website or e-mail the group at classnotes@cornell.edu