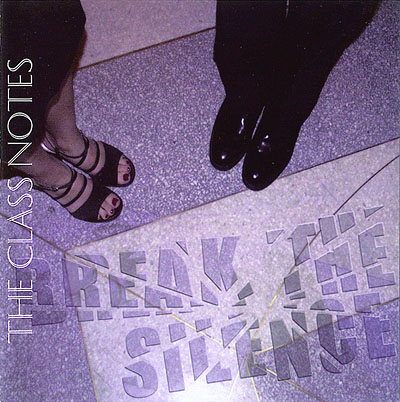 The Cornell University Class Notes have put together yet another yearbook CD. Breaking the Silence is an album that is a representation of what The Class Notes were like in the 1997-1998 academic year (like an audio yearbook). Compared to all the other collegiate albums out there, this one is nothing different. You've got your usual group of pop covers (of course, a few of these are from the eighties), old school-ish vocal percussion (not miked separately, or at least it didn't sound it), and a small unexcited sound.

The CD starts out with a very weak version of Depeche Mode's Enjoy the Silence. It's quite slow and the pitch is not always on. This is not a great way to start off an album. The second track offers us little more. In general, the pitch and blend are not spectacular. The energy, as well, seems a little anemic. For example, Let The Music Play starts out with an "unaccompanied" version of the chorus. I really want to hear it sung out, full voice, high harmonies, with gusto! But what I get is a small sound with a very matter-of-fact tone to it. The only song that made me feel anything was Only You. I almost fell asleep listening it. Normally, this is a bad thing. Here it's a good thing, almost like a lullaby.

The production quality is not the greatest I've heard. It sounds like they all stood around a couple of mics and sang. Now, don't get me wrong. You CAN get a good sound this way if you have great singers, a great engineer, and a great producer (and they all know what they're doing). But in this case, it didn't really work for me. I also don't want you to think these guys are bad singers or anything like that. Granted, there were some pitch issues, but overall they sing pretty well (some very nice solos). I wouldn't really recommend this album unless you are in the group, a family member, or a close friend.

I listened to this album more than any other that I've had the pleasure of reviewing. I kept on playing it expecting to hear something different. Unfortunately, I didn't.

The Class Notes have put together a fine collection of covers. There are some collegiate standards (Galileo, Like a Prayer), but on the whole the selections were ones that I'd never heard done a cappella. The arrangements are simple and to the point, and they're all sung with good pitch and blend. The soloists also had nice control over their songs.

The problem that I had with this album is that nothing sticks out as being anything new or exciting. Seeing as I hadn't heard most of these songs done a cappella, I was expecting to really be drawn into the music. If I hadn't been listening in order to review it, I'm afraid I wouldn't have even noticed the CD was playing. Every song is sung with the same enthusiasm, or, actually, lack of enthusiasm. While it worked well for some songs (Crazy, Fields of Gold, and the hidden track 69), it was death to the rest of the selections. I wanted the group to just let go and break out with some energy. It never happened. Everything was pretty; nothing was exciting.

The best part of this album (which really isn't a part of the album) was the potential for growth. All the pieces seem to be there for this group, but they need to be put together in a way that can grab some attention. Hopefully they can all learn from this experience. Until then, this is an album for the immediate fans of The Class Notes.

The Class Notes from Cornell University have a long way to go in the recorded a cappella world. Their latest effort, Break the Silence, is full of many basic problems that need to be addressed before they ever enter a studio again.

The energy levels in every single track were somewhere between dead and ... dead. I don't get it. Isn't it fun to sing these songs? Don't you enjoy singing collegiate a cappella? You need to be able to express powerful emotions to the listener without visual aid of any kind. You should be able to make them smile with every chord, and they should be able to see you smiling through the stereo. The biggest culprit of the lackluster energy on the album, even though it is also one of the strongest tracks, is Like a Prayer. This song needs to absolutely ROCK. Listen to the background parts at the end of the song: "Just like a prayer, I'll take you there .. It's like a dream to me!" Where's the fire and funk? Where are the columns of unrelenting energy? I had the paddles out trying to save this one. CLEAR!

As the album continued to play, I decided it was best to keep the paddles out for Windmills as well. Just when you think this song can't get any slower ... wow ... sheer amazement. At least Like a Prayer had a solid in-tune sound to it, whereas Windmills is severely straining on the ears. The soloist is just so out of tune that this track really never has a chance to shine.

As a whole, sound production on this album was also sub-par. Many times you would hear a breath sound, and often microphone pops would come across. Possibly different microphones, pre-amps, or just better use of the EQ could help these problems from occurring on future albums. The mix was also very frustrating. They brought the soloists out front in the mix, but left everyone else behind. A lot of the middle to lower voices come through, but the higher soprano lines are very hard to make out in many instances. All tracks could be mixed at a much hotter level for an improved sound.

Most of the tracks on this album do, at least, have a few redeeming positive qualities. Galileo and Criminal, though very overdone, were encouraging for me. Galileo was a high point for vocal percussion, and daring in some sense with a male voice on one of the lead "Indigo Girls" harmonies. Criminal was supported with a strong lead by Audrey Daigger.

Most of the arrangements were weak; most of the soloists were dull. Intonation and pitch came and went with uncanny regularity during each song. Unfortunately, there aren't many reasons to support purchasing this album unless you're a close personal friend of the group and its members. I first felt the group having fun and displaying energy during the hidden track at the end of the album. It's also here where they finally made me smile. Approach the rest of your songs with this sort of fun and enthusiasm and you'll have an album that everyone will enjoy.

The Class Notes' Break the Silence is a good, respectable album. I know the sweat and tears that go into projects like these, and the group should be proud.

But there are so many areas to improve that I don't know where to begin. That's not entirely fair, actually — what's wrong with this album is what's wrong with 99% of college albums out there. Thin, unexciting production? Naturally — the vast majority of groups out there shop by price and locality, and find it difficult to evaluate the work of the producer apart from their own performance. Lack of expression and emotion? Par for the course.

College groups out there have to realize that a recording must satisfy the expectations of the average music listener. If I spend my days listening to bass-heavy, percussive pop music, that's what I need to hear on college a cappella albums (which are mostly pop covers) to get a kick out of them. As advice to The Class Notes I would say this: take a listen to this year's CARAs for your category. Check out the punch of the Stanford Harmonics, and listen to USC's SoCal VoCals with the volume cranked. Play them for your engineer and ask him to mix one song with the same sound. If he can't do it, find someone else.

Similarly, we need the songs to move us. Remember that the number one goal for a recording project, from the point of view of the performer, is to capture the song in a way that evokes the highest level of emotional response from the listener. Break the Silence is packed with songs that should EXPLODE off the CD. Nice crescendos and a talented soloist make for a sweet Galileo, but I have yet to hear someone sing "How long 'til my soul gets it right?" on an a cappella CD and make me believe it.

I'm not going to harp on tuning or rhythmic integrity. I've heard better albums with less of both. This album is pretty but also pretty boring. The arrangements are there, the ideas are there. Now The Class Notes have to decide what kind of recording they want, find an album like that, model it, and mail it to RARB. I can't wait to hear it.

The Class Notes have the talent to make a great album, but Break the Silence falls a bit short. Though the covered artists range from Fiona Apple to Madonna, the songs are almost interchangeable, as The Class Notes' renditions are rather homogeneous, and conform to the style of the group itself. This is a problem many collegiate groups have. Some transform everything to bippity bopping cheese, while The Class Notes make everything mellow and laid back.

For future albums, The Class Notes should work on tuning and cleaning up cut-offs. Nothing is more grating to the ears than held out notes that are slightly off pitch, or a chorus of snakes at the end of a phrase. These are mistakes that are easily fixable. Don't scrimp with studio time, the end result will reflect it. The musical director should direct cut-offs until they are instinctive, especially with oohs and words ending in "s" or "t".

For some inexplicable reason, The Class Notes decided to place 69 tracks on this album. Of course tracks 15 thru 68 are each 4 seconds of silence. (I know, I went through them to make sure I didn't miss anything.) This is reminiscent of another album reviewed by RARB in the past, but I'll spare you the five paragraphs on silence and dead air. I can only suppose that the point was to have a Track 69, which seems rather childish.

Track 69 was also a disappointment. A great bass started out singing "I want to make love to you woman, lay you down by the fire" in a good imitation of the Chef from South Park. Of course, he messed up, and the group giggled and joked into other attempts that also stopped. This left me wanting to hear more of the bass, and still mad about the prolonged silence and the out of character (from looking at the elegant pictures of the group — tuxes and evening gowns) Track 69.

If The Class Notes put some energy and intensity into their next recording, it will be much better than Break the Silence. Unless you are a friend or fan, pass this one by.

CDs are $12 each plus $3 shipping per order. Contact The Class Notes by email for ordering details.