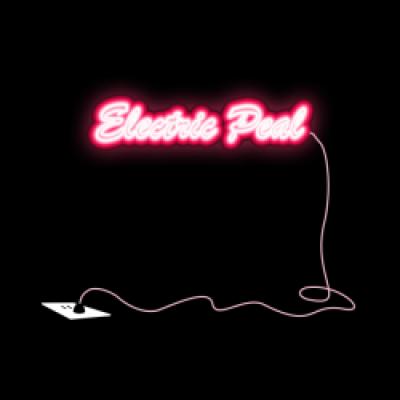 Shir Appeal calls itself the "most awesome Jewish A Cappella group ever". As long as you're giving yourself titles, that's probably better than a "Pretty Good Jewish A Cappella Group". Points for swagger, right?

Electric Peal is Shir Appeal's best release to date. Almost all the songs are in Hebrew with engaging, albeit noticeably youthful leads and an upbeat energy that makes the whole album a fun listen.

John Clark handles all production duties with musicality and attention to detail. Tight drum programming, tasteful effects, and perfectly tuned and rhythmed tracks give this album its maximum potential for repeat play and graceful aging.

Samson is probably the best of the tracks in its dead-on match of Anna's vulnerable lead with the song's lamenting essence. Shimon's lead, Cara, has an adorable voice, but the melody seems about a half step too low for her. Halayla Ya'avor's Hebrew rap is fun, as is the disco cheesiness of Shuv Hadisco Kan.

Critically, the group's phrasing and textures are often a bit static. The sense of space, of tension, anticipation, surprise — all rare. The singing is enjoyable and technically solid, but despite clocking in at fifteen tracks, the album has few moments that really demand the listeners' attention.

The sound is also very clean, and though the style is Jewish pop rock, listeners may crave a little more dirt and grit. Perhaps on future recordings, exploring extremes of both more and less could reveal a new depth to the group's music.

The liner notes generously provide entertaining translations for every song. That's something all readers will appreciate. Quizzically, we learn the lead's first name, and sometimes the arranger's complete name, sometimes just the first name and sometimes no name at all. (Please just use complete names.)

We also learn the group that "originally" performed a track, which is nice, but not necessary. But, unforgivably absent from the liner notes are the composers. All of them. Failing to credit composers is rude, and looks like you aren't paying the composers their compulsory license fees. And that's both wrong and criminal. It's too late for the CD, but at least put the information on your website. And make a note for the next class, so they don't spit in their favorite composers' faces.

Scores aside, Shir Appeal is objectively better and better on every release, and Electric Peal is one the group can be proud of.

To borrow a sentiment from a popular beer commercial: I don't always review the Jewish albums for RARB, but when I do, I tend to be a hardass.

In my own defense, it's somewhat unavoidable as I grew up listening to Jewish music and singing a cappella, speak Hebrew fluently, lived in Israel for a year, and am familiar with the vast majority of the Jewish-themed or Hebrew-language material being covered by groups today. If I spoke fluent Finnish and grew up in Helsinki, I'd probably do the same to Rajaton (though the outcome likely wouldn't change and I'd still think they were awesome).

Tufts Shir Appeal has consistently been one of the better collegiate Jewish groups over the last decade and, availing themselves of the abundant producing talent available in New England (John Clark, in this case), their recordings generally have a polish and professionalism that was lacking — at least until recently — on albums put out by fellow Jewish groups at other schools. So the fact that this album sounds good comes as no surprise.

The material, however, is a bit of a mixed bag and basically divides itself into three categories:

1. Israeli pop/rock: Shir Appeal does its best work here, and in most cases, these are story songs, with fully-realized verses, choruses and bridges, and a definitive style that can be captured effectively in good arrangements. Thankfully, this is the vast majority of the album and thus, in particular, we get to enjoy the layered, interestingly-syllabled arrangement of At Yafah and the Latin feel of Isha Kna'anit, both courtesy of Daniel Ruben whose work is the best of the many who contribute arrangements here. Even when we get a dance track like Baby or a throwback like Shuv Hadisco Kan (answering the pressing question of how do you say "Shake your booty" in Hebrew), the energy and the fun of the performance overshadows the kitschiness of the material. And while it's disappointing that the Hebrew lyrics (and the songwriters) are not included in the liner notes (we just get "OPB"), I suppose that if space is at a premium — as it appears to be here based on the font sizes chosen — choosing to publish the English translations is understandable.

2. American Jewish pop: this generally takes the form of either a traditional religious melody adapted into pop/rock or jazz form, or a cover of what passes for popular, original Jewish music these days, which is generally composed and arranged in a thoroughly homogenized, most vanilla style of the secular pop/rock idiom. We get one of each here: the melody for Etz Chayim is one that was (and still is) quite popular in synagogues where it is sung upon returning the Torah scrolls to the Ark. The alt-Jewish rock band Blue Fringe basically put a rock beat behind it and Shir Appeal pretty literally transcribes what was already a marginally-interesting adaptation at best. Ve'ahavta is all boy band flash but you can't quite avoid being charmed by an arrangement that manages to spin endless repeats into toe-tapping fun. If only the group had not decided to mimic the accents of the Yeshiva kids who sang the original — it's truly painful to listen to.

3. Non-Jewish pop: here too, we have only two cases in point. Regina Spektor's Samson is a cute, quirky song, but Shir Appeal doesn't really do much with it nor was there any sort of arc to the song, which is unfortunate as the song does actually tell a story. Similarly, Four Shadow's Rain — which I believe is erroneously titled and should be labeled It's Gonna Rain — is a nice expansion of the all-male 4-person original but beyond that, this interpretation adds nothing and possibly even robs the song (the version covered) of some of its inventiveness at the end.

On the basis of #1 alone, if you tend to like foreign/Israeli pop, my recommendation would be to get this album. You're not often going to hear this diverse a group of Israeli songs done a cappella as capably and consistently as they are here. And truth be told, the other four songs don't detract significantly (as much as Ve'ahavta annoyed me, it's stuck in my head now). For your specifically Jewish a cappella needs/interests, you might also look at groups like Tizmoret (Queens College), Yeshiva University's Y-Studs, Manginah from Brandeis, Kaskeset from Binghamton, and Kol Sasson from the University of Maryland, but Shir Appeal definitely deserves to be considered alongside them as among the best at what they do.

Tufts University's Shir Appeal has created one of the more "puntastic" album titles of the year. There is something electric about Electric Peal, the group's latest recording. As both an asset and a detriment, there is a crackling energy in the sound of the recording — bright and buzzy. The arrangements are anything but static — for the most part focusing on a current of activity throughout the vocals, pads and rhythms sections. The musical moments sparkle. The only shocking aspect of the album is the extreme nasality of the soloists.

Given the style of the group and its penchant for current Jewish pop songs, some would argue that the soloists' vocal technique shouldn't be all that unexpected. But if you aren't accustomed with this type of singing, it can take some getting used to. Especially considering that the nasality is carried over to the English language songs where that vocal timbre isn't germane to the genre.

One interesting point to call out is that the singers definitely need to watch the syllables they use while scat singing. The altos have this particular run near the end of Shimon that really seems to emulate one of aca-producer James Cannon's favorite words. If you know James, you know the word I'm talking about. If you don't ... buy this track and you probably won't be able to miss it. It doesn't detract from the overall enjoyment of the song, but it did give me pause.

The other — while not shocking but just a little perplexing — item with the album is the inclusion of Rain on the tracklist. To expose my own prejudice, it was odd to have this religious song included on such a secular album. Truthfully, it probably has more to do with the fact that I would associate the song with a Christian-based pop/R&B band rather than a Jewish-affiliated one even though it is based on the Old Testament. The group credits Four Shadow in the liner notes instead of the correct songwriter/publishing credits and actually mistitles the name of the song (it should be It's Gonna Rain). And while Jon McLemore did make the song aca-popular with Four Shadow (and my personal favorite version as NoJoe), the original was written by Bobby Womack — a noted R&B performer — that also appeared on Take 6's Join the Band prior to the Four Shadow release.

There are some really cool songs on the album. Isha Kna'anit is a dark grove that has exceptional layering  I love Hakol Kashura and have no great explanation for it. It's slightly island sounding and has this nice pulsating rhythm that makes it very infectious. Soloist Bea Shepard's voice is very pleasant and engaging. It's a song that you'll find yourself bopping along to without realizing what you're doing. Much like the next track Shuv Hadisco Kan will have you flat out dancing. Performed like the love child of the Bee Gees and Scissor Sisters, this mesmerizing ditty is the highlight of the album.

I'm charged with offering solid advice to the consumer as to whether or not they should purchase this album. I am reluctant to do so. Shir Appeal's lastest recording Electric Peal doesn't attract everyone's listening ear. Even if you understand the language, the frequency of repeat listening is low because the style of singing leaves ample room for improvement.