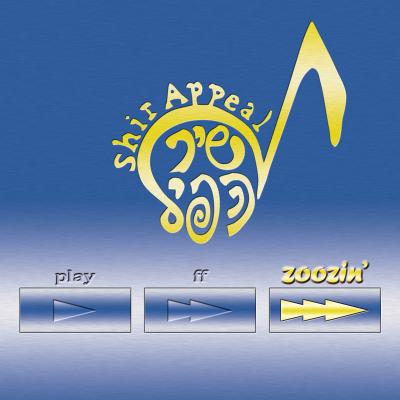 94% Hebrew and Yiddish. Unknown percentage Kosher for Passover. 100% accessible and enjoyable to listen to. At least 75% engineer-John-Clarke-computer-enhanced.

99 % applicability of this text from my last RARB review of the group: "Most tracks … are sung impeccably (though artificially) in tune. The blend is usually quite good. Leads are good as well. In many ways, Shir Appeal sounds like a typical solid contemporary collegiate mixed a cappella group. It is their interesting selection of music which separates them from their peers." I take back the use of the word typical. This time they are a step above.

"Shir hapeal" means "song of the elephant", a pun on Tufts' mascot, Jumbo the elephant. Appropriately, the group is making lumbering progress forward from their last release. Though the overall sound has improved a smidgen, there are fewer standouts on this latest release. The "3"s are almost gone, (and admittedly, a "2" cropped up) but there are no more "5"s than last time. And at the end of the day, those are the tracks we really care about.

Mishaela is the flash of brilliance on Zoozin'. Emotional, dynamic and filled with unexpected and satisfying harmonic changes, Mishaela stands head and shoulders above on a solid album.

Again to quote my last review: "Zoozin' is a very enjoyable release from a promising group with broadly varied yet refined taste. Further, in the sub-genre of collegiate Hebrew-influenced a cappella groups, Shir Appeal stands out as one of the best." More true today than ever before. In their field, Shir Appeal is still right on track to be the group to beat.

To my ears, there was no real difference in the quality of the tracks attributed to the incarnations of the group. In fact, I think tracks from Zoozin' would feel equally at home on Unpealed and vice versa.

The group still does a great job choosing and arranging songs, and still hasn't found its standout soloists. My favorite track is Lazuz, where the soloists rap instead of sing.

All but one song is in Hebrew, and English versions of the lyrics are provided in the liner notes. The production is appropriate and I did not find it distracting. Shir Appeal is not afraid of studio magic, but is also not afraid to let naked voices ring.

While I would not recommend this album to everyone, if a cappella in Hebrew is up your alley, you won't go wrong with Shir Appeal.

Shir Appeal, a co-ed group from Tufts singing primarily Jewish a cappella music, follows up the 2003 release Unpealed with another successful effort in Zoozin'. A consistent album, it provides a steady stream of average to above-average tracks.

Zoozin' has many of the same elements of success found on Unpealed. Arrangements tend to be simple, though they do show a bit more nuance here. Again, parts are written in the meat of singers' ranges, with a tight array of voices from bass to soprano. This allows the group to stay in tune remarkably well and provides a well blended sound.

Unfortunately, there is also little progress since their last effort. While it still sounds pretty good, there have been huge strides in a cappella since 2003, and this album doesn't seem extraordinary like Unpealed did. Zoozin' is another example of an album that suffers from what I term the "electronic wash" phenomenon: computer assisted mixing in the block that removes much of the emotion from the voices and makes one group sound just like any other group. At least Shir Appeal manages to still capture some dynamic interest which isn't often the case. Another consistent problem, the group tends toward a very nasal, wide-vowel sound that can get slightly annoying, for instance on the opening of B'gidah.

Despite the somewhat generic quality of the backing vocals, Shir Appeal still has a lot going for it. Spirited, well sung and emotional solos propel this album past the pack. The engineers did a great job in placing the solos prominently forward in the mix. The music is also pretty emotionally dense, and the translations in the liner notes were a nice touch. As someone not familiar with any of these tracks, I spent the first couple of listens getting familiar to the material but soon found myself getting into the groove, or even "zoozin'" along. Some of my favorites were Achshav Tov, Hamilim Hachaserot and Mishaela which reminded me quite a bit of several tracks on another recent review of mine, Rajaton's Out Of Bounds. I think the pinnacle of the album is the beautifully written and performed B'chom Shel Tel Aviv which swells with some tremendous harmonies.

Shir Appeal proves with Zoozin' that they truly deserve a spot at the top of the Jewish a cappella subgenre, and continue to show appeal beyond their niche. I look forward to more from this group.