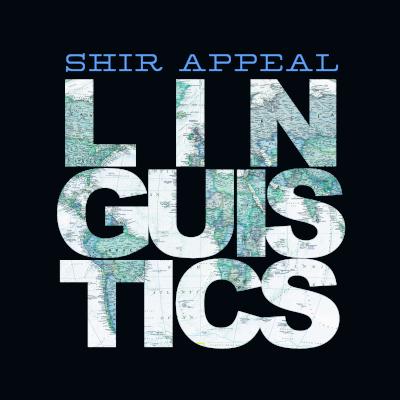 Hebrew, Russian, Yiddish, and English … it’s no wonder Shir Appeal decided to name this album Linguistics! The group hails from Tufts University and exclusively performs music rooted in the styles and themes of traditional and contemporary Judaism. I've heard many niche groups try to strike a balance between staying true to their themes while appealing to a more mainstream audience, and none has done it quite so deftly as Shir Appeal does here. Regardless of the era it was written, the genre in which it gets categorized, or the language in which it is sung, every song on Linguistics fits right in. This sense of consistency, along with a healthy dose of talented singing and vibrant production, makes for a wonderful journey through the wide world of Jewish music.

The album is divided into two sections, in a very peculiar way. The final seven songs are separated by a brief moment of silence. It's a feature of most albums that helps our ears find closure from the previous song and reset to a more neutral mood before being plunged into the next. It lets us know that each song is a distinct work of art that can stand on its own as well as contributing to the compilation as a whole.

The first six songs have no such space. They're smushed together, stepping on one another's reverb tails and queued to start precisely in time on the downbeat of the finish. It's a cool effect, especially when notes from Na'im Achshav bleed right into Babel, and Noten Lach Zman into Achshav. It makes you feel like you can't help but listen to the next song, like you're listening to one continuous medley all the way until The Prayer of François Villon.

Which is an excellent place to pause. The Prayer of François Villon is beautiful in its simplicity. Just the somber voice of Noa Rosen rising and falling in Russian over piano-like arpeggios, like grey waves breaking as a lonely devotchka waits longingly on shore for her sailor to return. You can't move on from a piece this delicate without taking a breath to collect.

The front and the back halves of Linguistics cleverly mirror one another. Babel and Jonah are the two English pop songs with none of the scales or spirituality of the rest of the album; just references to religious stories, and that's enough to make them fit. Noten Lach Zman and Hatzafon Haporeach are the driving (and painfully over-syllabled) punk rock tracks on either side of the middle. Amok Batal and So Far (Lihiot) are the ambient, moody grooves. Unity, like The Prayer of François Villon, would be the perfect track to close the album with a powerful statement. The symmetry is dashed by the amusing, but clumsily misplaced, classic Yiddish sound of Bei Mir Bist Du Schöen.

Linguistics is clever. It pulls from all over the musical landscape to create a positively Jewish a cappella experience. The album as a whole is extraordinarily dynamic with a lively sound — you don't need to understand Hebrew to enjoy this. What keeps it a notch below a "5" is that many of the tracks are not dynamic on their own. With a little more creative arranging and less repetition in the percussion, Shir Appeal could be just the group to usher in a new-and-improved, mash-up-free era of themed a cappella.

While it is rare to see a collegiate a cappella group perform in multiple languages, Shir Appeal from Tufts University has produced an album around this concept. Linguistics does not grab its consumers with flashy or punny album art, but it is effective in serving to highlight the allure of this multilingual project. The result is a solid offering of songs that span a variety of genres and have an appealing, lively quality to them.

At first glance, a native English speaker may parse through to find titles they can understand, but doing so would be a disservice; the album is tonally well-structured as a whole with a strong progression from song to song. While the choice was clear musically, I find it curious that the majority of English-language songs are at the end, while Babel stands alone towards the top. More balance might have made Linguistics more truly heterogeneous, and could help to unify the album by means of its diversity. Shir Appeal's choice in closing with Bei Mir Bist Du Schoën was brilliant, as the subject matter sums up the message of Linguistics in a fun, energetic way.

The studio work on the album is generally solid, creating excellent textures out of Shir Appeal's background vocals, which display a high level of musicianship. There are times, however, when the percussion tracks sound too artificial and the vocal origin is no longer present, such as in Amok Batal. But the main detractor from the engineering element of this album belongs to the soloists, who sound consistently exposed and lack cohesion with the entire mix.

This brings me to my next point about solos. Perhaps the strongest offering from Shir Appeal in this regard comes in the form of the duets So Far (Lihiot) and Bei Mir Bist Du Schöen, and Noa Rosen deserves special mention for her impassioned rendition of The Prayer of François Villon. In general, however, the soloists on Linguistics paint a one-dimensional color and don't progress musically or emotionally, as if there is something left in the tank. My advice for the soloists of Shir Appeal would be to use the natural syllabic emphasis of the text, regardless of the original artists' choices, and accentuate it to make the music work for both the text and its meaning. This is particularly obscured in Unity and the otherwise delightful track Jonah.

I appreciate this ambitious project, but that does come with a caveat: presenting music that is not mainstream does not dismiss a group from making tunes their own. This is evident in a few arrangements that have transcription-like qualities. The group handles the arrangements admirably musically, but there could be even more musical interest in the form of reharmonization, inclusion of more 7ths and 9ths, changing the feel or groove of a tune, or simply straying from the trap of copying rhythms and textures directly from the original.

Shir Appeal shows its strength in the form of its versatility and its ability to communicate musically as a group. Regardless of your fluency in any of the aforementioned languages, Linguistics is absolutely worth a listen.

To really enjoy Linguistics, it's important to approach this album with the right expectations. In a lot of a cappella right now, there's a trend towards more powerful, angst-filled songs and arrangements: music that wants to cut you open and punch you in the face with emotions. Linguistics is not that. This album is fun, energetic, sometimes downright bouncy; it's music that wants to lift you up, and it will do just that if you let it.

Many of the tracks on the album feature an infectious level of energy. The opening number, Na'im Achshav, does a good job setting the tone on that front. And the group's energy is not limited to "pep", either. Hayonah Halevanah has a beautiful intensity that's more hopeful than celebratory thanks to a convincing lead from Zoe Greene. In The Prayer of François Villon, one of the album's more somber tracks, the group (and soloist Noa Rosen) convey the yearning tone of the song without feeling dragged down.

Linguistics also features great examples of how some gentle restraint can help an album succeed. None of the soloists overreaches his/her abilities or tries to steal the focus, helping convey a sense of connection within the group. There was also a conscious effort to cut down on the album length, as mentioned in previous reviews of the group, which was accomplished both by covering fewer songs as well as by keeping all of the tracks to under four minutes.

I still think the album could be tighter if one or two more tracks had been left off. There are some excellent arrangements: Babel has a nice range of space and dynamics, and Hayonah Halevanah has great pacing and progression. Some tracks, however, either don't quite get off the ground, or are carried by the mixing. Huge credit should go to Plaid Productions (who produced and mixed the album) for tracks like Hatzafon Haporeach and Amok Batal, which would have fared worse without the excellent production work. Dropping a couple more songs would leave room to breathe some more life into those numbers.

That being said, I think Shir Appeal had a clear goal in mind for this album, and that sense of purpose comes across to listeners. The helpful liner notes also feature translations for the non-English numbers, which goes another step towards helping the audience connect to the message. Regardless of how familiar you are with Hebrew music, Linguistics is an uplifting collection of songs that's a lot of fun to listen to.

You can find Linguistics on Amazon music or on iTunes. CDs can be purchased by filling out and mailing in this order form. Contact business manager Ami Wulf with any questions about ordering CDs at shirappeal@gmail.com.