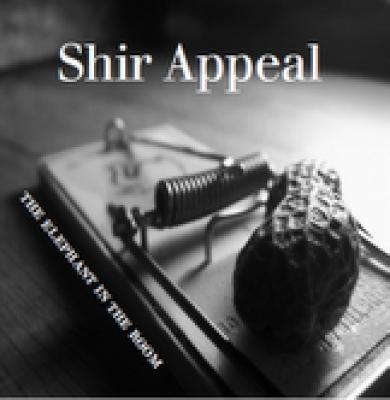 The Elephant in the Room could be a reference to the generously apportioned sixteen-track release itself, but more likely it's a play on the pun "shir hapeal" which means "song of the elephant". Since Tufts' mascot is Jumbo, the elephant, this is just the kind of joke that should play nicely to the home crowd. Thankfully, though the insider title may be limited to the locals, the songs themselves easily transcend mere neighborhood interest.

The Elephant in the Room boasts catchy melodies; thoughtful, spacious arrangements; clear, unaffected leads; and an infectiously free energy. This last element more than any other, helps the group stand apart from so much cut and pasted contemporary fare. There is a sense of breath, phrasing and even a little graceful sliding around that breaks right through the computer restraints shackling so much a cappella today.

Of course, Shir Appeal's use of Hebrew and Yiddish lyrics on fourteen of sixteen songs is also fairly distinctive, and that language barrier may be the deciding factor for many potential purchasers. But before becoming a one-issue voter, be happily advised: this is an enjoyable recording, even for monoglots.

Production plays an important part in making Shir Appeal sound full and rich when they need it, but not tiring the listener out with an unending, cacaphonous wall-of-sound assault. There's also a more subtle richness to be experienced here. The quality of the voices, as captured up by the microphones and processed in the studio is noticeably sweet. It's like the sparkly sheen that so many albums have, but easier on the ears, gooeyer, yummier. It's the kind of thing you notice on a good system in a quiet room.

Despite the cross-cultural song choices, Shir Appeal's overall sound is pop rock with a little world folk flavor. It's a genre the group seems completely at home with, and one that won't befuddle even the least travelled American ears.

The album starts quite strong, but seems to lose a bit of focus after song twelve, where songs enjoy a little less attention to craftsmanship, and scores slip to the low end of average. Thankfully, by this time, smart programming should have made a fan out of you, and if need be, there's always the fast forward button. Had the first and last four songs been switched though, the listener's reaction to what remains might have been less generous.

Tumbalalaika shines for its lilt and energy. But the space in Zmanim Meshuga'im makes a lasting impression. Hallelujah, one of the group's two English songs, isn't my all-time favorite version of this well-worn classic, but the moments of intensity are very satisfying.

Shir Appeal strikes a refreshing balance between simplicity and fullness that makes The Elephant in the Room one of the group's most enjoyable releases.

Jewish collegiate a cappella has come a long way! Shir Appeal has put together one shiny awesome album. Any Bubbe would be kvelling to her girlfriends while playing Mahjong, "You've got to hear what my little Mendy gave me for Chanukah." That being said, this is a long album. Bubbe might fall asleep before the end. Not because it's boring, but sixteen tracks is just a lot for one album. Twelve tracks has been the sweet-spot for album length for many years.

On first inspection, Hallelujah initially strikes as being out of place on an album full of songs primarily in Hebrew. But of course, the word Hallelujah is Hebrew, and Leonard Cohen is also a Jew (albeit one that is also an ordained Buddhist monk). Still, I see what they did there. Shir Appeal's version of this oft-covered tune is particularly spectacular and builds to a glorious end. Tumbalalika stands out as a folk song in an album of pop songs and pop-renditions of more traditional songs. The accent on the solo is far too stiff for a song such as this. Yiddish is a language that tends to be a bit sloppier on pronunciation. This is analogous to singing a rock song with a very "Broadway" enunciation. As far as accents go, the accent on Bat Tzo'ania sounds very good but the "R"s don't match up, too American. Many of the tracks have this same issue. It's a small detail, for sure, but it keeps nagging. Daphne Amir does get it right on Shomer Yisra'el and Ha'Ahavah Nish'eret. Metzuyan!

We use a certain type of processing in the studio called "de-essing" which can be used to reduce the amount of sibilance in a vocal. Some languages, like Mandarin, have a lot of sibilance built into the language. Hebrew, on the other hand, can be a pretty guttural language and one that is tricky to mix. The "ch" (back in the throat) can be unruly and really jump out of the mix in an unpleasing way. On Ha'Ahavah Nish'eret, the solo could have really used a "de-CHHH-er" processor. This could have been manually compensated for by cutting the volume just on these sounds.

My personal taste is to mix the solos a bit lower in the mix than these. This is a very dry album (reverb-wise) and when there is reverb, it feels out of place and a little tinny (Ani Ma'amin). Having reverb on all the time and cutting it out periodically, for effect, feels more natural. Having it very dry, and then suddenly plunging us into a giant space for a chorus and then back out, feels more jarring.

There appear to be several songs that end on a "JOW" or "DOW" or "HUM" exclamation on a very final 1 chord. This is what I usually call a "ta-da ending" and it needs to be dropped from the a cappella arranging bag-of-tricks. On the brighter side, there is an excellent guitar solo in HaKin'ah and well-done dubstep breakdown in BaRechov. But the drum intro for Every Goliath Has Its David doesn't sound right to me. Sometimes you get these things right and sometimes you don't.

This is an excellent album, meticulously produced, and one that should serve as the new baseline for all Jewish collegiate a cappella.

If Wikipedia is to be trusted, the O.E.D. cites the first use of the phrase "elephant in the room" as being in The New York Times on 6/20/59: "Financing schools has become a problem about equal to having an elephant in the living room. It's so big, you just can't ignore it."

Using that definition, and even with the predilection for elephant puns (given the school mascot), it's an odd choice for Shir Appeal to title its album using this turn of phrase. For as much as I have admired the group's work in the past — especially in the mid to late 00's — and as much as I typically think of them as being among the perennially best Jewish collegiate groups in the US, this album is has a veritable parade of "elephants" which both individually and collectively are too overwhelming to ignore and ultimately meaningfully detract from enjoyment of the music.

It's certainly fair to note that Shir Appeal is for the most part covering material you're unlikely to hear elsewhere in the American a cappella scene. Even amongst Jewish groups that focus on Israeli pop music, they should be commended for not simply repeating many of the classics that continue to make the rounds. Points for that originality, and for enlisting the help of John Clark as a co-producer, Plaid Productions as co-producers, mixers and engineers, and Dave Sperandio for mastering. The result — with one notable quibble described below — is, unsurprisingly, a very slick, polished sound, edited and pitch-adjusted without sounding too mechanical, with a smattering of effects wizardry that enhances without being overly intrusive.

But back to those elephants. While I laud the group for the less-traveled repertoire they're attempting to cover, it's meaningless if there isn't a better understanding of the words being sung and an attempt to convey that meaning through the arrangement and performance.  This is glaringly evident in a lush and expansive but otherwise uninspired (and umpteenth) version of Hallelujah, but it's even more bothersome for us Hebrew speakers in the incessant plodding of Bat Tzo'ania, Ha'Ahavah Nish'eret, and others, all of which have stories to tell which are muddled if not entirely lost in the arrangements and performances here. Sure, they sound pleasant and professional but they have been robbed of their feel and emotional pull almost entirely.

On a related note, if you're going to dabble in well-known classics like Tumbalalaika or Eli Eli, again, it's incumbent on you to bring something new to the table. The "set and forget it", almost metronomic, background in the former renders a charming and humorous folk song with a particular story to tell, into just another sterile, forgettable, endlessly repetitive drone. Only at the end do we get a brief glimpse of what could have been had a bit more inventiveness been applied as the song moved through verses two and three. As for the latter, to be fair, the group is covering an already schmaltzy version by Shlomo Gronich of this hauntingly beautiful song, so I suppose it would be understandable if the song was overstuffed by the second time they go through it. Sadly, their version starts so full and so richly harmonized that there is basically no journey to be embarked upon. We've reached the destination without taking a trip, and that's so much less interesting and enjoyable.

On the production front, the one strike here is that there seems to have been a conscious effort to place the soloists directly in the center of the mix with the backs split quite pronouncedly right and left. That wouldn't inherently present an issue, but many of the soloists featured here do not have big voices that cut through the dozen+ people singing behind them, and generally speaking, dynamics are not placed at a huge premium here overall. The net result is quite a few instances — moments in Ma'aliyot, towards the end of Hallelujah and Shamayim Afrikayim, parts of Kama Pe'amim — where the backs are threatening to swallow the soloist almost entirely. The placement in the mix may be well-intentioned, but the balance just feels noticeably off at times.

Lastly, there are the liner notes, which to the group's credit are exhaustive in their attempt to include both the legally required and audience-friendly info on each song. Regrettably, the research in some cases and the proofreading in others, was lackluster, resulting in songs appearing out of order, a misspelled song title (Lir'ot et Ha'or, not Li'eot), song credits being repeated for the subsequent song (so, for example, we don't know that Ha'Ahavah Nish'eret is actually OPB Gilad Segev and BaRechov is OPB Chen Aharoni), and lyrics that are actually liturgical (Shomer Yisra'el) being marked simply as "Traditional".

In my review of Electric Peal, I admitted that I might tend to be a bit hyper-critical with the Jewish groups since I perhaps have a broader knowledge of and experience with the material they are covering.  At the same time, Shir Appeal is a group I am predisposed to like based on past experience. It's thus that much more disappointing to find that with their latest release, they're wide of their mark, delivering music rich on sizzle but low on substance. Maybe they should have paid a little less attention to elephants and lot more attention to the littler things.