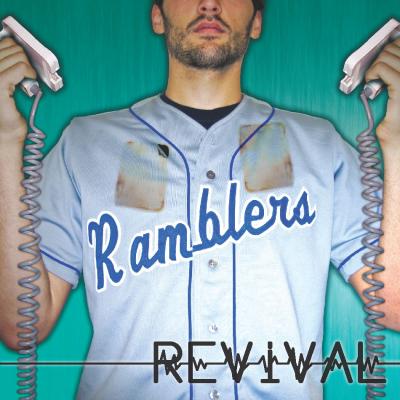 The Midnight Ramblers have put together an energetic, charming and fairly creative party. The kind where everyone has a blast, it becomes the highlight of your life, and then you try to explain to someone else why those were the halcyon days and they just kind of shrug and go "oh, okay, that sounds like it was a really nice time."

As the reviewer who wasn't at the party, it's hard for me to make a lasting connection with most of this disc. I don't know whether the women's names in the backgrounds are the names of the guys' real girlfriends or just place holders, and I wasn't there for any of the times that medley left a room full of 200 people in stitches. "White boys singing hip hop" is just a phrase with some nice production, not an introductory punchline designed to get the crowd on its feet.

All that said, the medley-ized Jumpin', Jumpin' is reasonably clever and pretty well executed. But not subtle. Neither is the big "joe know wanna joe" intro to In Love With a Girl, or the heartfelt wailing on My Hero. Noah Berg, the group's star arranger, gets at times a little too heartfelt and loses his musicality in places — but I bet if I'd been at the party, I'd fill in the gaps and I'd be thrilled to have so much passion on disc.

Duality is the star for the unaffiliated listener. It's got a great indipop hook, a tight arrangement, and a really excellent held-together vibe. I also like the old-school glee club lead into Brown-Eyed Blues. Greg Corrado sings the solo beautifully, especially the verses, and the song is a great change of mood. The seamless transition from the foot-stomping title track into its successor is deftly handled, and we should also pause to applaud Interlude, a piece of original music that slots in neatly midway through the album. Berg wrote this, while also arranging every single other track, and the guy's clearly got a ton of talent and drive.

So there are some gems that give the Midnight Ramblers a little bit of curb appeal, a little bit to set them aside. Otherwise, Revival comes off like a well-sung, high energy yearbook. Which is great, but more so if you had the good fortune to have been there all along.

When I pressed Play on Revival, and heard the first song (also titled Revival), I expected to hear a concept album. For a little while, I did. And then I didn't. Then, I thought I did again! And then subsequently didn't. I'm not entirely sure what the purpose of some of the moments on the Midnight Ramblers' latest are supposed to be, but the group has come ever so close to making amazing things happen. But, they're not quite there. This just-barely-not-quite seems to be a theme of the album. So many times I found myself half to almost all the way through a song, ready to say "Awesome!" when something jumped out at me and made me say "Wait... really?"

As for the "concept", I'm not sure I see it. Some tracks are arranged to flow into one another, like Jar of Hearts into Interlude, and then again into All of the Lights. The album also begins with a seamless transition from Revival into Any Way You Want It. It's a great idea, but the flowing pieces of the album are separated from one another. Whatever story arc the Ramblers are trying to convey is muddled by tracks like Fireflies and In Love With a Girl, both of which are tune-out-able as repertoire choices and for the quality of the tracks themselves. Both seem to have been dropped in between the seamless sections almost haphazardly, and negate the momentum of the elements that precede them.

The gapless songs also bring me to a point I want to touch on briefly — mastering. First, the album is overly harsh, with way too much energy in the high-mids. Even on a set of muddy bookshelf speakers, I found listening to the album, particularly the first half, aurally straining. Second, there are pops and clicks between the tracks that are supposed to play into one another. This, at least partially, negates the seamless effect and takes the listener out of the experience, albeit briefly.

Delving a little further, we get to a discussion of song choice. On the whole, it's pretty darn good. I don't think I've ever, for example, heard anyone do a Slipknot cover, and the Ramblers pull it off with Duality. They even have a member (exactly who, I would not presume) who pulls off the traditional maqam-style singing in the first third or so of the song. But then, like all the other songs about which I thought "this could be a 5!" something happens. In this case and overwhelmingly with every other, the arrangements are the issue. Group member and producer Noah Berg arranged all twelve songs on Revival, and he's made some alternatingly good and baffling choices. Duality, Any Way You Want It, and All of the Lights stick out the most in terms of silly syllable choices. The arrangements eschew appropriate guitar and brass sounds for "jin", "weh neh", "now", and, most confusingly, something that sounds like "blah blah".

When a group self-records an album, I've come to expect one of two things — either lush and perfectly honed soundscapes (see VoiceMale's recent albums), or rampant quality control issues (no examples given to protect the innocent). Revival is somewhere in between — the blend and energy are fantastic, and the soloists are pouring their hearts out. Screaming tenors like Jared Suresky and Andrew Polec take their respective songs (Any Way You Want It, Beside You) and rip them to shreds (with the exception of some notable high notes that don't quite get there). However, the group didn't take the last step and move from distracting nonsense syllables to creating a sound. As it is on the album, Any Way You Want It is driven by rock drums and a great lead, but when the lead drops out in the choruses, the Ramblers hit us with a decidedly cheesy group-sung "deh doo weh neh neh neh neh now". Imagine, if you will, what it would have sounded like if, instead of a being sung on syllables that would sound more at home on a late '90s-era album, the guitar hook was voiced only in the bass and/or lower voices, and accompanied the rest of the group belting the riff up the octave on "ah". That would be something.

You know what, though? With Revival, the Ramblers have made something really, really good. There are just a few missteps that prevent it from being great, and that's a feat few achieve. Revival is something to be proud of. The Ramblers should take this album, and use it as a stepping stone, and improve on what's already good. Next time, I expect something great.

With the exception of All of the Lights (because the original is brilliant), I prefer every track on this album over the original. No joke. The Ramblers have taken eleven songs that I wasn't crazy about and made me love them all.

This is not a flashy album. There aren't specific moments of impressive singing or incredible arranging that will wow you. The wow moments are at the end of each track when you realize how brilliantly that arrangement evolved through the entire song. Or when you realize how excellently they've covered everything from Owl City to Slipknot. The arrangements are the highlight of the album. Every song was arranged by Noah Berg and is inventive, nuanced, and extremely compelling.

Berg’s arranging style celebrates the beauty of the human voice and rarely imitates instruments. The mixing of the album also consistently prioritizes voices that are trying to sound like voices (those on words or holding “mm”, “oo”, “oh”, or “ah”), and pushes instrumental voices and vp further back in the mix than they would normally be. I love how this keeps my focus on the sound of the human voice, which is what a cappella should be about.

I really admire the sequencing of tracks and how the Ramblers treat the album itself as a composition. They use a simple idea to effectively give the album structure. The opening, midpoint, and closing are marked by two tracks with no break in the singing between them. And in all three cases, both tracks are enhanced by this connection. These linked tracks create a richer, deeper experience than they could have on their own.

This structure makes for really excellent pacing. The middle two tracks (Interlude and All of the Lights) feel like the middle of the album; Interlude is the overture to the album's second act, and it deserves an instrumental introduction because it's a hell of an act.

The final two tracks, My Hero and Beside You, are among the best a cappella I have ever heard. The two songs complement each other perfectly. The arrangement for My Hero is unbelievably compelling. I could listen to the backs for this song on repeat all day. The opening swells are so beautifully executed and the final fifteen seconds are heart wrenching. Then this seamlessly transitions into Beside You, which is vastly improved over the original song. The soloist doesn't oversell it, human voices make the song much more genuine, the structure of the song is tweaked so that it doesn't rush into the final chorus, and combining it with My Hero forces one to take the song more seriously. These changes elevate a cheesy song to an emotional masterpiece.

The more time I spend with this album, the more I love it. Every track and soloist is engaging. Every arrangement is inventive. I can't think of a more enjoyable or rewarding way to spend 45 minutes. Listen to this album.