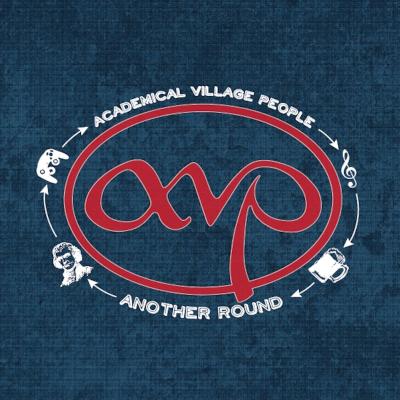 It has now been almost two decades since I started my love/hate relationship with the Academical Village People (AVP) from the University of Virginia. That's a long damn time to enjoy or cringe at the antics, music, and performances of a group of zany men from a rival university of my alma mater. Their latest disc, Another Round, is just that, another round of music that I'm at times smitten with and then grimacing over. More of the same — and that's a good thing.

Some of the best things have come from AVP: Mike Daguiso, former RARBer Mark Manley, Kate from the inaugural sing compilation, producerkind James Gammon, and all things George Michael just to name a few. AVP albums have been fairly strong throughout the years — venturing from just above average to excellent. And so, for me, the trend continues with Another Round. If the first four tracks —  Love Runs Out, Sunday, You're On and Dear Darlin'  — made up a separate EP, I don't know if I could find a more satisfying a cappella output for the year.

These four songs just work for me because of the soloists. Love Runs Out builds and builds without losing its core. Tal Benatar has this easy-cool approach to singing that is captivating — I'm buying it 100%. Sunday gets me with its earnest appeal. Matt Kim isn't the best singer on the planet — having a very back-of-the-throat quality — but he's the best at conveying the emotion needed for this one. I'm right there with him. And the background vocals here are probably the best on the album, supporting instead of detracting from the song (a problem this group has struggled with, which unfortunately comes back on this release). As a contemporary song with expected production effects, You're On is mixed within an inch of its life with superb panning and other techniques, a great gospel background snippet, and some tight vocal percussion. Evan Lum is just the icing on the cake.

And finally, I'm a fair-weather fan of Olly Murs, so I wasn't sure what to expect with AVP's take on Dear Darlin'. Have I already said that I'm smitten? Yes, I'm sure I have. Well, I'll continue by stating I'm completely smitten by Sam Eldredge. The innocence and fragility of his voice is the perfect match for this track. He is perfect throughout the entire 3:44. I wish I knew who joined him on the trio, because it is full of superb blend and intonation. What I don't like about this track is the same issue I have with a few other tracks: the arrangement is just too busy and the backs are mixed way too loudly. As a counterpoint to You're On, less would have been so much better. Let the weight of the song lyrics carry this, and not endless bleating in the background. Still, Eldredge gets a "5".

The other tracks on the album are a mixed bag. Arrangements kinda falter (Hopeless Wanderer), the backs are ridiculous (End of the Road), or the soloist doesn't quite match the song (I Wanna Dance With Somebody). But none of this is overly detracting from my enjoyment of the album. I will say that it was odd hearing Home — a song that's become a signature for a group that I sing with (DeltaCappella) — given a valiant effort here. Hearing the differences is refreshing but also jarring at times. And ironically, our arrangement is based on the version that the UVA Hullabahoos sang around ten years ago. Small world.

Another Round almost garners a "5" because I just love listening to it, but the second half just isn't as strong as the beginning. It's good, but not great. Enjoyable, but not WOW. Fans will love it. The causal listener will say, oh those boys sing well. For the most part it's a natural take on collegiate singing, and except for You're On, you never forget it's a group of guys spittin' and singin'. So if that's your thing, you'll definitely enjoy AVP's latest.

As a final aside, for my own personal reasons, I do wish they would have selected the title FINE, China! from their list of rejected album titles. YAAAS.

Another Round is an ear-pleasing, hip-shaking release from the guys in Virginia who bring the aca party and refuse to leave until you've had an awesome time.

I've been listening to AVP since I was in college, which I guess was some time ago now, but something new happened on Another Round. It wasn't all good times, noodle salad: I felt waves of heart-cracking emotion, too. The feelings arrived on the raw and affecting Dear Darlin', featuring wide-open vowels that swallow you whole. I'm a sucker for a good exposed bass, and as soon as those low notes rolled in like distant thunder, I was all in. What an exquisite piece. The emotions resurfaced in Human, when the lead lets himself become so vulnerable, so authentic in his question, "Are we human, or are we dancers?"

Let's wrap Honesty Hour and get back to that party the group promises us. You're On is a hyper-produced jam that's as slick and catchy as they come. Bravery runs the front line with lead Jacob Irby absolutely killing I Wanna Dance With Somebody —  so gutsy and confident! And, as is custom with AVP, the guys alter some lyrics to make humor their forte, this time appearing in the old-school Boyz II Men romance End of the Road.

The humor is creative, and more creativity would have certainly added more depth to these often too-literal transcriptive arrangements, the only area holding Another Round back. There's certainly nothing to complain about in the sound department: the production supporting this album is spot-on, with a perfect lushness from James Gammon.

If you like collegiate male a cappella, Another Round should delight.

"Energy is contagious" is indeed a true statement. What's even better is good energy wrapped in a twelve-track album produced by the Academical Village People. AVP's latest release, Another Round, is full of youthful energy and creativity, making it difficult for an audience to contain themselves while listening. I do wish that AVP gave us a few more moments to catch our breath, but I won't dock too many points for that.

What makes this album a standout is that it feels young. I don't mean that it's lacking maturity, but rather everything feels current, even the older works. This is a testament to appropriate song selection. Even lesser known songs feel ready for airplay today. Sunday is definitely one of the major surprises of the album. Everything about this track is balanced — convincing emotion from the soloist, throughout a mellow, yet upbeat tune, all while backed by a strong group foundation.

The track is followed by another great choice in You're On. The techno-pop feel is created flawlessly by AVP. The track is a bit heavy on the production effects for a cappella purists but that shouldn't matter when a song is good. From the harmonies in the second verse to the oh-so-smooth bridge, AVP does a stellar job in execution.

Even popular songs have a sense of new life breathed into them. Love Runs Out has intensity that resonates long after the song ends. Human boasts an all-star soloist in Kevin Zeithaml and an impressive arrangement that draws you in and allows you to have a surreal listening experience.

AVP delivers a truly southern experience with its soulful rendition of Home/Boondocks. It almost feels impossible to add another ounce of intensity to the already present bass, percussion, stomps, claps, and sheer power being performed.

Older tunes are no exception. AVP makes a smart decision in dropping the octave for the lead in I Wanna Dance With Somebody, not looking to match Whitney Houston but rather give us their best rendition of the song. AVP also finds a way to restructure the chords in End of the Road that doesn't compromise the original feel, but draws on a more modern vibe while keeping the RnB element intact.

While AVP nearly aces the test, its greatest strength is also its biggest weakness ... energy. Much of the album has an in-your-face delivery restricting the listener of necessary time needed to catch their breath. The inclusion of Dear Darlin' and Hopeless Wanderer offer small moments of reprieve, but somehow manage to still keep energy high throughout. Tracks like A Change Is Gonna Come and It's a Beautiful Day could use more moments of restraint, too. More dynamic contrasts throughout would have been a great remedy.

Still, from the detailed production to the infectious need to dance, Another Round is the perfect party mix that will have everyone enjoying themselves till the place gets shut down.