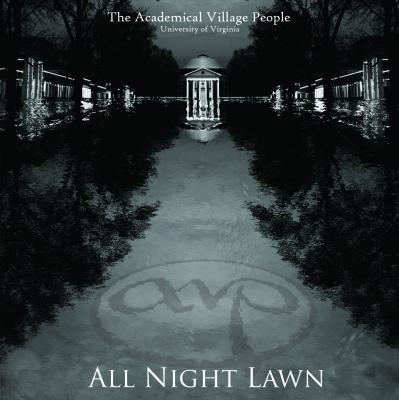 All Night Lawn is surprisingly fun, which turns out to be one of the nicest things you can say about a good new album from a talented bunch of male singers. 'Tis the season for nice new albums, from shiny groups with the skills, discipline and money to make something shiny. This one is the funnest.

Where the Blacktop Ends is fun, with a nice warm groove that gets the album going. Even better, it's followed by a bunch of songs that mostly keep moving and grooving. The choices are good and cover a pretty good swath of popular music. Take Uptight, which wins points for having a good showy tenor and for being a generally fabulous tune. Nancy Wilson, yeah. Can't go too wrong there. In a different vein, even a halfway decent performance of I'm Yours is a pretty sure bet, and the Academical Village People do it up nicely. Number One is nice hip-hop pop. And Grace Kelly? If you don't get it, I'm not sure I can explain, let's just move along.

Who needs mediocre Serious Music when you can make a good pop album? Would You Go With Me is a great example — lighthearted, moving along, sweetly silly. So late in the set list, the song turns up seemingly out of nowhere, and the intro hook makes me smile every time. Oddly one of the few exceptions to the parade of fun is It's Raining Men, which is disconcertingly deadpan. I mean, it sounds nice and it's catchy and all but it honestly sounds like it's being sung by either a straight guy or a else really, really sincere gay guy. Neither of which is really in keeping with the discofabulous theme. Huh.

And now, the burning question — given the cheesy title, are these guys more AC/DC or Lionel Richie? Honestly, I'd have to say they split the difference. The tunes are smooth and poppy like Richie, with a healthy dose of jumping up and down and running around like Back in Black. Which is great.

These songs don't cannonade off the album and into your brain, they are not paragons of flawless purity, and they might not bowl you over the first time you listen. But you'll smile. And you'll enjoy yourself. And if you're already in a decent mood, you should be able to repeat the experience. What more do you want?

Big AVP hitters have graduated since Learn to Interact. Even more AVPers have left since I reviewed Academical is Not a Word, which was full of star vocals. The difference between then and now is audible. Sometimes a cappella groups take a step backwards from previous releases. Unfortunately, I think AVP has met this fate. At least it's not a huge step backwards. Mainly, we're dealing with a lot more mediocrity from the guys in Virginia.

Bright notes on All Night Lawn include a few very choice tracks and AVP's signature humor sprinkled throughout (shoot, even the album name gets a laugh). Grace Kelly stands out as a banner achievement for AVP. The song itself is fun and wild, and AVP steps up to give it the energy, creativity, and gusto it needs to make a huge impact mid-album. Both Lovers in Japan and Bad Dream have timeless beauty, sensitively handled by guys who also skillfully cover light and sweet fares like I'm Yours. Diversifying your album is always welcome.

A few large issues take All Night Lawn in the wrong direction. The album opens with two ho-hum tracks — a hard way to hook your audience. On the other end, I feel AVP is above closing with a long hip-hop medley followed by a minute of reverb laughing. The overall blend and oomph on All Night Lawn isn't nearly as tight and controlled as previous releases, either. Things are a bit sloppier here, and less powerful. And though it isn't really a large issue, I'm sad that It's Raining Men sounds so restrained. This is truly a unique and rare weather phenomenon, no?

It's hard to say where AVP should go from here. Obviously, recapturing better musicality is a must. But I'm sure their fun will continue, and we'll all benefit from their next round of antics.

After glancing at the track listing for The Academical Village People's All Night Lawn, I braced for the worst. The repertoire is littered with the most common of collegiate a cappella pitfalls — It's Raining Men, boy band-athons, hip-hop medleys ... man, this really could have been a disaster.

Of course, such tracks are only "pitfalls" because they so often fall short of the mark. Happily, this was not the case for the men from the University of Virginia. Led by the chops of frontman Davis Nzabanita (Where the Blacktop Ends, Summer Love / It's Gonna Be Me, It's Raining Men), The Academical Village People have released an album worthy of at least several listens.

Right off the bat you'll notice that these guys have a warm, pleasant sound. Harmonies are consistently tight, both among the block and among lead voices. Although occasionally you'll hear a voice stick out or a chord fail to lock, the singers achieve considerably strong blend, which helps many of the songs come together. Because the charts are sometimes fairly advanced or intricate (Lovers in Japan, Where the Blacktop Ends), the group's togetherness is essential to its success.

Did I mention Davis Nzabanita? It's much easier to hear this guy sing than it is to pronounce his name. His voice shines as he effortlessly does justice to Justin Timberlake, Keith Urban, and even The Weather Girls. He's joined by some other solid solo talent. I really like Mark Williams in Grace Kelly — he just oozes character and has the notes to back it up. That song is a gem overall, actually — the backup harmonies on "everything more" are totally badass. Oh, and apparently Dan McDonald doesn't have a bottom to his range (see Would You Go With Me).

Definitely a lot of good stuff on this album. The only thing that kind of bothered me throughout was the lack of energy in the block. They guys sound very pleasant, to be sure, but sometimes they're just a bit too pleasant. I would have given higher marks to It's Raining Men if the group had matched the soloist's enthusiasm — it doesn't have that over-the-top electricity that makes the original song so great. The worst offender is the Chili Peppers tune — it sounds like it has a flat tire. Again, the soloist does a fine job, but the group sounds a little too much like a church choir. It can also be noted that the vocal percussion seems kind of muddy and wet throughout, which may contribute to this issue. It's not like the energy level is so low on the album that it completely depletes its value, but it might have held it back from being a mind-blowing record.

Still, All Night Lawn showcases some remarkable talent. Besides the ultra-standard Faith early on, everything on the disc is refreshing and fun. I like these guys for their pure, bright, sincere sound and for their thoughtful arrangements and performances. A bit more energy would have been welcome, but even so, this record is worth the purchase price (especially at 15 tracks). Oh, and the little banter after the last track actually made me laugh out loud.

To purchase this album, visit the iTunes store, the group's website, or acaTunes.com.