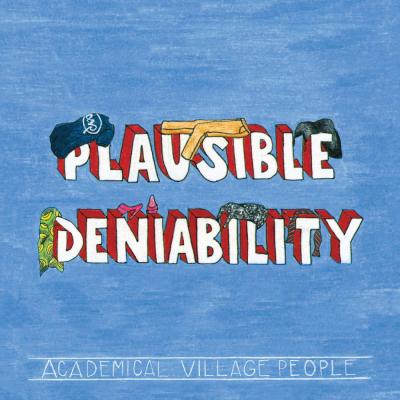 The party boys are back with Plausible Deniability, and while the same energectic oomph that has been the hallmark of the group since the mid-'90s is still present, the musical ability has taken a turn for the bizarre. Along with the tracklisting. This is an album that sounds like it is coming from three different groups (which the case may be knowing how collegiate groups work). Some of the tracks soar where others fall so flat (literally and figuratively) that I'm hardpressed not to see how the two divergent sides land the album as a whole smack dab in the middle of averageness. I almost said "mediocrity" just to be overly dramatic, but the polarizing nature of the tracks tempered my hostility towards the bad songs and dampened my love of the great ones. The University of Virginia has a plethora of great a cappella singers, but with this release, the Academical Village People decided not to highlight them consistently.

The trouble isn't really in the backgrounds. Unfortunately, the soloists, arrangements, and the song selections are the weakest elements on an otherwise enjoyable (or at least palatable) album. There are moments where soloists are ill-suited for the songs they sing — upper register singing isn't anyone's friend here. Some soloists have nice middle notes or an interesting tonal quality, but others just come across as not giving a damn. Or horrifically, they decide that it's okay to replace the word "you" with "chew". Doing so takes me out of the song immediately. (I'm looking at you, With or Without You.) I mean, one time, okay, 15 million times and I'm just done. As for the arrangements, some of them are incongruent with the songs they are supposedly supporting. Almost everything is bright and slightly anemic, feeling light and airy, where heavy and dirty would be much more suitable. Again, With or Without You. Where is the dark, where is the angry, where is the angst? We want and need it for the catharsis to happen. A nice chordal "ooo" at the end doesn't do it.

But a big: "WHY ARE WE RECORDING THAT SONG?" shoutout to Help and for the love of jeebus Africa? (P.S. I hate the Weezer version.) There are so many songs that could/should have replaced those and provided the same emotional arc that I think the group was going for. Man. But at least they aren't singing the Clef Hangers' version and passing it off as their own as many groups have done in the past. And why stick Sunday Candy in the middle of the Oldies section? It's surrounded by the geriatric trio of songs previously mentioned.

And yet, AVP kills it on a lot of the songs. That's What I Like is a pretty solid opener. It's presented as some cloying guys toying with Dad's hip-hop swagger. But that's kind of what puts the smile on my face. I think I get the joke and I'm okay with that. We get to play around and chase some guys and girls with our dapper dan dapping. Human is excellent — it's rich and warm with just enough grit that makes life worth it. But the winners are Jealous and Beneath the Brine. Holy cow. Jordan Maia has such a unique voice that I listen to Jealous on repeat and marvel at some of the things that he does. He fills every nook and cranny with personality and we are the better for it. He's in the class of entertainers who don't necessarily have a traditionally "pretty voice" (think the likes of Bernadette Peters or Macy Gray), but a commanding prescence. You may actually forget to breathe listening to him sing. Good job. And Beneath the Brine is so out of left field and it's crazy-good most of the time.

What an odd duck of a recording. Plausible Deniability could be your favorite album of the year, but you didn't hear that from me.

There is an ever-present squeaky clean sound constructing the songs on Plausible Deniability. Each line is packed with the maximum amount of big, bright voices in each measure, creating tidy, nicely resolving vertical chord patterns. The arrangements love to manually affix an all-wrapped-up major chord at the end of these pieces, too. It's as choral and cheery as it gets, sounding very much like pop song arrangements you'd buy for a junior choir to get the kids excited to sing something off the radio. These works are eerily dimply-cheek Disney, even normally depressing With or Without You. Even Sexual Healing sounds jolly and jazz-handy. True, yes, you're right, that's still innovation and isn't that better than transcription? Innovation is necessary for a cappella covers, but if you're not changing the text, then the chords and the emotional delivery still have to make sense or at least highlight nuances. There's some dark messages in a few of these songs that could sound so poignantly and artfully delivered, but the notes never take us there. And there's certainly nothing romantic or sexy about the repeated "bop bop bop bop"s in Perfect. Hiring an outside arrangement editor to redesign these pieces would go a long, long way on Plausible Deniability.

The musicianship on Plausible Deniability has a few dips, too. That's What I Like does not start the album off strongly. The intro sounds weak and unsupported: even the "Hey"s are weak and unsupported, delivered as more of a "Hey?" than a "HEY!". Thank goodness the second lead in That's What I Like, Jordan Maia, swoops in to sing. But dang, not a great first impression for our time together. Later in the album, a lack of vocal drive hinders Help so much that it absolutely sounds like the guys are yawningly singing a pleasant "Hell" to open the track. Go ahead, give that song a spin and tell me if you hear something else.

Let's touch base on Africa. A cappella groups (and garage bands) were covering Africa when I was in high school in the '90s, and I'm really okay with its continual presence in our lives, be it from our community, Weezer, or straight-up Toto on the Oldies station. In this rendition, however, the verses are quite shaky. But please marvel at the lead on the choruses, Andrew Fernandez. When I hear him hit his gloriously high, tension-filled first line, the world is suddenly perfect and I am paying attention to nothing else but his voice. If I can figure out how, I would love to make his entrance my ringtone, not kidding.

I'm also appreciative of the lively rap on Sunday Candy. And thankfully, we hear a lot more intensity on the last two pieces that close Plausible Deniability — some edge is quite welcome after all the softness. But, it's too little too late, and all the forced glee means Plausibile Deniability is not my favorite release. If the group is interested in hiring an arrangement editor, huge improvement from this stage isn't difficult, as there's certainly enough talent here to reclaim the party circuit.

The Academical Village People (AVP for short) have a serious hit on their hands with Plausible Deniability. This all-male group can stun listeners with high-energy tracks, or deliver an emotional gut-punch with subdued, ballad-type songs. It's the middle area that can sometimes get a bit muddled and leave you with more questions than excitement for what's to come. Still, you'll enjoy the ride nonetheless.

In the first category, you have tracks such as Sunday Candy, Kiss Me Quick and Beneath the Brine. Sunday Candy oozes with personality, charisma, and to be honest, a great deal of fun music. The group establishes an old-school, hip-hop feel from the get-go as the bass lays down a thick groove and the vocal lines around it add color and life with playful harmonies and active vocals. And the tag team effort from the two leads is otherworldly — they command the listener's ear from start to finish.

Kiss Me Quick brings some serious swagger with its strong and captivating lead, who fluctuates effortlessly with his Pop/RnB stylings. The song itself is BIG on relentless energy, displaying phenomenally cohesive layering.

Beneath the Brine is the shocker of Plausible Deniability. Where AVP found inspiration for this track is beyond me. The track smacks the listener right in the face with its vigorous, heavy metal percussion and booming bass, which is unlike anything else on the album. Ghostly vocals from the backing group and experimental arranging help to distinguish this AVP track from not only the rest of the project, but from the likes of anything else other groups are putting out.

As for the second category, tracks such as Perfect and Jealous stand out. Perfect is perhaps the album's most patient endeavor as it's careful not to give the listener too much before its needed. Each buildup is methodical and precise with dynamics, shaping and transitions, carefully overwhelming you with emotion. And AVP's lead will floor you! In a similar fashion, AVP's soloist for Jealous will fill you with sentiment. His control and delivery are unbelievable! The song's heavy-laden tone will wash over you, and its long flowing chords will have you believing that AVP can sing anything.

While these tracks are homeruns, it is everything in the middle that sometimes leaves you scratching your head. Tracks such as Human, That's What I Like, and Africa offer nice spins on the original, while others such as Help, Mr. Brightside, and Work from Home range from lackluster to mediocre. In all of these tracks, they fail to offer the knockout punch, or any punch at all that the heavy hitters of Plausible Deniability consistently serve up.

Overall, the album dishes out more than a few good tracks, which adds to the current forward momentum of collegiate a cappella, and for that reason alone, it's worth a listen.