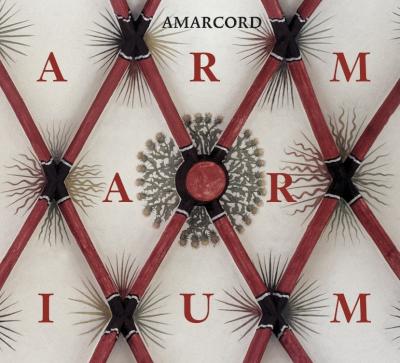 Early music from amarcord! This music and these singers are a surefire combination, and ARMARIUM is every bit as good as you would expect. In German or Latin, the cathedral acoustics and rich tone of this sextet are a perfect match for this repertoire. This is an album to consume in great gulps, full of musical satisfaction and guaranteed to add ambience to your quiet morning or evening at home with your books and your thoughts.

The songs blend together nicely from afar. Up close, there's a good mix of chords and counterpoint. Just when the block harmonies start to weigh, up pops an agile tenor counterpoint, a snippet of unison chant or a glowing cadence. I particularly enjoyed di Lasso's Confitemini Domino, as well as the Schein pair in track eight and Schütz's Viel werden kommen. I love the early German composers to start with, and it's a treat to hear their music sung so well by native speakers of their vernacular tongue.

Stoltzer's Magnificat sexti toni is another gem, harkening back to the Jacobus Vaet setting that was perhaps the standout track on Nun komm der Heiden Heiland, amarcord's generally outstanding Christmas release. It's a long and challenging text, full of contrasts, and these singers seem to have the perfect feel for the form.

You'll want good speakers for this disc — at times the dynamic range overwhelmed my crappy computer pair but it sounds glorious on a higher-quality setup. Amarcord's group sound is heavier than what you might hear from an English ensemble, and the top countertenor can seem perilously thick if you're used to a bright and light soprano. I would submit that the darker timbre works on this record, and I also commend the group for knowing when to switch things up. After pushing the countertenor almost too his limits at the end of Heilig Is Gott der Vater, the group pulls back to a baritone chant with drones in their choice of a closing sequence. Sequentia de S. Thoma Canthuariensi / Spe mercedis et coronae is an able bookend to the album's opener; it eases listeners out as generously as they were welcomed in.

A classical ensemble of exceptional talent, amarcord continues its legacy of excellence with ARMARIUM.

Many lovers of contemporary a cappella, arguably RARB's core market, would do well to refresh their playlists in the sonic sorbet of amarcord. The pure tones and careful phrasing are tools that all ensembles could benefit from. That the group achieves all this in such a natural manner, without tools like melodyne or autotune, is another worthy goal for any group to strive for. Amarcord's succulent dynamics milk every drop of musicality from the cadences. Here, it both delights and earns the ensemble scores permanently in the "5" range, even at the few moments when micro-tuning issues might otherwise have brought lower scores into consideration.

While not one of RARB's scored categories, amarcord's programming choices are truly excellent. The carefully chosen material establishes a single sonic world — the goal of every album — and yet delivers just enough variation to make listening a journey. Moreover, each piece seems written for the group's strengths. And finally, while the entire album is strong, the very strongest of the material is front-loaded, giving the listener the immediate positive first impression every group desires.

On the negative and perhaps nitpicky side, the "set it and forget it" EQ and mastering could have used a more attentive approach. Most disturbingly, track three (Ingrediente Domino) explodes at an unlistenably loud volume in comparison with tracks one and two; and track five's volumes (Confitemini Domino) aren't far behind. Singing so beautiful should not elicit a wince for such technical reasons! Occasionally the tracks, just prior to the singing in them, seem to start with a suddenness that would have been better avoided with a more subtle, uncompressed fade. And finally, the falsetto tones of amarcord's gorgeously rich countertenor are occasionally allowed to build too much energy. Gently reducing — not the volume but the EQ of the over-resonant frequencies — just a bit on the loudest performances, would improve this already excellent recording.

For classical a cappella music lovers, this album is still a must-have. But for any group seeking to take its own music to a higher level, I urge you to listen to amarcord's graceful and majestic phrasing. It's an inspiration!

As I listen to ARMARIUM, I'm reminded of the (undoubtedly apocryphal) story of the woman who, upon visiting the Mona Lisa in the Louvre, turns to the guard and says, "I don't like it, what's the fuss about?" The guard replies, "Madame, the Mona Lisa has stood the test of time. When you stand before her, it is you, not she, who is being judged." Likewise, if you can listen to this album without being moved by at least some of these pieces which were written hundreds of years ago (some of which are likely older than da Vinci's painting), that probably says more about you than about the compositions or the wonderful singers of amarcord.

As one can see by the dates given in the track listings, AMARIUM is an homage to several great composers from the Baroque, Renaissance, and pre-Renaissance eras. Although I myself am fairly familiar with those time periods, having sung in two community choirs for the past twelve years that do a large number of early music pieces, I was not familiar with any of the fifteen songs on this album. While that makes the album interesting, it also requires more attention than just a casual listen. That's not a bad thing.

Amarcord is glorious to listen to, though. Although I've rated all tracks a "5", I started making a list of which tracks were my favorites of the "5"s. One time while listening, I wrote down O Pater coelestis (Calvisius), Magnificat sexti toni (Stoltzer), and Heilig ist Gott der Vater (Dietrich) as my three favorites. Another time I decided to start from scratch without referring to my previous notes, and wrote down Gaude felix India, Mitten wir im Leben sind (Walter), Christus resurgens (Stefanini), and Magnificat sexti toni (Stoltzer). Three of the four were completely different tracks! So, while Magnificat sexti toni needs to get a nod as one of my very favorites, at least five other tracks are in the running. And who knows? If I were to go through this process again, I might end up with several tracks which are different again — that's the type of album amarcord has released. One time through, some bit of Gregorian chant may strike you as remarkable — Gaude felix India with its constant drone and alternating tenor/bass/combined solos/duets is mesmerizing. Another time through, perhaps it's the high tenor who catches your ear as he effortlessly soars above the rest of the vocals. And perhaps the next time through, a certain chord resolution will cause you to nod your head in appreciation — I noted two of those for myself in Magnificat sexti toni alone!

So there you have it. This is an album filled with 57 minutes of timeless music which, although not as well known as La Gioconda, may fill your soul equally well.

This album is available from iTunes, Amazon, and the group's online store.