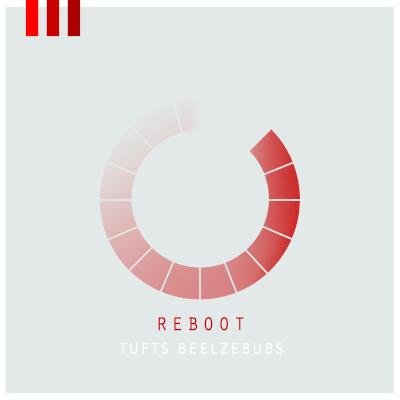 Reboot is four perfectly crafted, well-sung winners. The singers who put it together chose songs that suited them and clearly poured their souls into knocking the performances out of the park. If there is an asterisk, it's that these are so clearly studio performances. The backgrounds are walls of sound, mixed and mastered and compressed into a recorded marvel. It's well-handled — even if the percussion is perhaps far afield from pure beatboxing, you won't forget this is an a cappella group. You can always hear the voices in the music. Still, something about the whole leaves me, personally, somewhat disconnected.

There's something about modern pop music that has created a niche market for acoustic sound. It's almost de rigeur now that someone will hit big with a fantastically produced techno wonder, then remix it with bongos and hollow-body guitars to give fans the warmth they are craving. It's like you can't make it into everyone's ears unless you produce out the soul, but you can't keep the hearts and minds unless you find a way to put it back later.

Sam Hoban's solo on Weathered is the warmest place on the album, and I find myself figuratively crowding under it for shelter. Set atop a stack of almost too-tuned backgrounds, colored slightly by what I think of as the pitch-dampening timbre of falsetto top lines, the intonation of the song sounds a little more fragile than the rest of the EP. But feeling slightly out of kilter is a small price to pay for such a lovely lead line. The song ends wonderfully, too — the peak chorus manages to get all the different textures working together, as any good sonic summit should.

At the other extreme, there is absolutely nothing acoustic about 24K Magic and that is exactly as it should be. Bruno Mars is not about real life and realism; he is about joyful dancing in cop outfits and pretending Michael Jackson never got weird, let alone died. The Beelzebubs hit this out of the park and I love them for it.

The other two songs are somewhere in the middle, in feel and in expectation. Who Do You Love is a much better song than Believer, but that's more due to the source material than the performances. Likewise, I find no fault with Ed Boyer's mixing or Bill Hare's mastering. If I had sung on this recording, I'd be very proud of it and feel that it stands up well amid the daunting discography that came before.

It's tempting — and would be remarkably accurate — to simply refer you to my review of In The Book for most of my feelings regarding the latest release from the Tufts Beelzebubs — a 4-song EP entitled Reboot. But that wouldn't be fair to the a cappella giants that are the Bubs nor would it be worthy of my 300th review for RARB, so here goes.

On its surface, Reboot is everything one might expect it to be: tastefully arranged, energetically sung, spotlessly edited, flawlessly recorded, mixed and mastered. Invaluable contributions from the prodigious talents of Plaid Productions (Alex Green & Bubs alumnus Alexander Koutzoukis), Bubs alumnus Ed Boyer, and Bill Hare, make that almost inevitable. It's truly an astonishing tradition of excellence that has been sustained over the years with each new Bubs recording, and the most-current group surely deserves the lion's share of the credit. In that light, overall, Reboot definitely does not disappoint.

But these are the Beelzebubs and — fairly or unfairly — I want to see them continually meeting and exceeding the standards set by prior incarnations of the group and pushing the envelope for what collegiate a cappella can be. And by that standard — unfair and perhaps impossible or impractical as it may be — Reboot falls a little short. And not just in its length.

For me, the occasion of a new Bubs album used to mean that I was going to hear at least some material that I might never have expected to ever hear a cappella altogether and, with any luck, I may even hear it rendered in a manner that smacks of creativity and inventiveness. Bubs arrangements will develop and deepen as they progress, and while the covers will be faithful, they will rarely feel slavishly so. Individual years may vary, but more often than not, I'll probably also get at least one truly mindbogglingly virtuosic and astonishing soloist.

Without diminishing its quality relative to the majority of collegiate a cappella and without suggesting in any way that this is still not top-notch work, Reboot is sadly none of these things. Though the arrangements capably adapt the percussive elements of both songs into a vocal palette, there is still nothing remotely unexpected or heart-grabbing in Weathered and Who Do You Love. We get the crescendos and decrescendos in their proper places, the drums come in and out when they're supposed to, and the soloist channels the right mix of passion and angst. But as fastidiously arranged and expertly recorded and mixed as they are, they nevertheless feel workman-like. From the Beelzebubs, I want to hear true craftsmanship. 24K Magic might get the closest to capturing a hint of the old Bubs "je ne sais quoi", but in so meticulously reproducing the arpeggiated synths and the overall metallic, ringily auto-tuned sheen, the tempo and vocal energy somehow feels just slightly under. As a result, the insistent, funky pulse of the original is downgraded to a more robotic, automated feel. Believer was recorded live (albeit edited subsequently) so it perhaps requires a different set of criteria. But it's a song whose original is predominantly drum-based with a bit of plucked guitar and a lot of bigger, accented/sforzando-ed moments for other instruments to duck in and out. As a strictly vocal interpretation performed live, this feels like the most transformative effort from the group, but the net musical and emotional result leaves me underwhelmed.

At the risk of repeating myself, I must reiterate how much I wish this was the standard to which all cappella groups could realistically be held. It's why, despite my quibbles, my scores are as high as they are. Work like this is probably the envy of at least 90% or more of the collegiate a cappella community. But like Hebrew National answering to a higher authority, the Bubs will probably forever answer to a longer legacy for me. It's a blessing and a curse, perhaps, but it also means I will always eagerly look forward to what comes next from these men of Medford, MA.

I hope the Bubs will forgive me that my first reaction to Reboot was, "Oh, man, it's been two years since the last Bubs release, and all we get is a stinkin' EP?"

The Bubs manage to pack a lot into just four songs — an uptempo pop number (24K Magic), a heartfelt ballad (Weathered), a catchy singalong (Who Do You Love), and a booming stadium anthem (Believer) — all with the group's signature polish, fully engaged performances, and top-notch soloists.

I say this in every review of the Bubs, but it still holds true: it serves the group immensely well to continue to work with the same team of Boyer, Hare, and Plaid/Koutzoukis. Except for the fact that the source songs were released after the last Bubs' album, these tracks would fit seamlessly on any of the Bubs' recent recordings; the consistency of sound, production, and overall aesthetic is what makes the Bubs such a cappella powerhouses year after year.

The standout here is the ballad Weathered; the Bubs relish in the slow, smoldering crescendo of Alex Koutzoukis's phenomenal arrangement, and soloist Sam Hoban's shift between casual warmth and soaring power seals this performance as the best on the EP. There's still plenty to love on the rest of Reboot — the richness of the backs on Who Do You Love, Ian Rumsey's perfect lead on Believer, and the glossy polish of 24K Magic, to name a few.

There are a few changes I may have made if I had been in charge here — I would've liked to hear an even sharper intensity on Believer (this is a song that needs to grow up beyond an 11), and I wouldn't have had the Bubs tackle such a straightforward, overdone pop song as 24K Magic. Those are just minor complaints, though; Reboot is a thoroughly enjoyable EP that highlights the Bubs' strengths and serves as a perfect teaser between full-lengths.