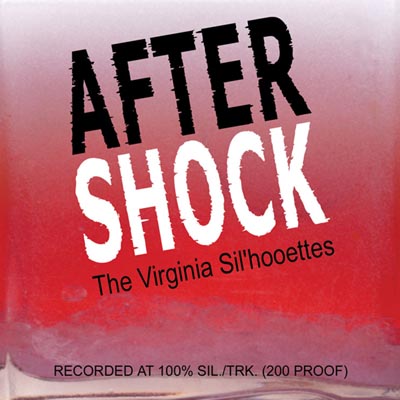 When last I heard the Virginia Sil'hooettes (on their 2001 release Flair), they were a very talented group of singers with lovely tone and blend, but in need of more varied material, more diverse arrangements, and better engineering. I'm happy to report that with the release of their new album, After Shock, these ladies demonstrate that they have found the answers to many of these problems. What is so troubling, then, is their failure to implement these solutions consistently.

On After Shock, The Sils continue a tradition of wide-ranging repertoire, drawing musical inspiration from the old and the new, from Aretha Franklin to Radiohead, from Wham! to Alicia Keys. And pleasantly, this album succeeds where Flair failed, in that there is enough variety to maintain listener interest, and the songs are thoughtfully ordered to keep the album moving.

Unfortunately, The Sils have also continued a tradition of very "wet" mixing, which converts what could have been groove-establishing background syllables into a somewhat overwhelming constant chordal sound, punctuated only occasionally by the sound of a faint consonant yearning to be heard (see High and Dry and portions of Wake Me Up Before You Go-Go). Sadly, the mixing issues do not end there. The low end is far too often mixed into oblivion, yielding the same treble-heavy issues that plagued Flair (female "basses" have to work hard enough — the least an engineer can do is give them a little "oomph"). In a few instances (most notably on Video/I Do), the solo is poorly placed within, or perhaps even behind, the mix.

On the arrangements front, the results are better than on Flair, if still not perfect. The group's musical director, Summerlyn Lotz, arranged all but one of the tracks on this album, and while she has done an admirable job of keeping things interesting, there are at least a few tracks where the arrangements shade toward the generic. I Will and Always be Around are two which feel formulaic, and though both are sung prettily, neither is ultimately very engaging. The group has solved a common problem for all-female groups by admitting members who are capable of producing a functioning, useful bass drum sound. I'm baffled, therefore, why said sound is not used to greater effect and with greater frequency, and why the group instead uses the far less effective tom-tom drum sound to keep the beat purposes (see Hit 'Em Up Style, Roam, and Always Be Around).

Making all of the above even more aggravating are the few instances on After Shock where The Sils truly put it all together — the glimpses into what this group could be if they were to maximize their strengths and minimize their weaknesses. On Mary Beth Maziarz's Two Satellites and Natalie Imbruglia's Wrong Impression, we hear top-notch all-female a cappella, beautifully sung, nicely blended, well soloed (especially Melody Akhavan on Two Satellites), and tastefully percussioned (the opening of Wrong Impression in particular). On Fallin', an ambitious attempt at Alicia Keys' soul/r&b/funk ballad, the ladies do some of their best background work behind a kickin' solo effort from Amber Payne (with help from Blaire Reinhard and the aforementioned Ms. Lotz); one only wishes that they had stuck with the true bass drum sound throughout instead of reverting back to those infernal tom-toms.

If The Sils could harness the lessons learned from these excellent tracks and apply them album-wide, their next CD (perhaps this time next year?) could well be the culmination of the progression from good (Flair) to very good (After Shock) to "must own".

While it's neither groundbreaking, riveting, nor perfectly polished, the solid tuning, confident air, and soulful performances of After Shock make it worthy of some attention and praise.

The Virginia Sil'hooettes have quite a nice group sound. Full, smooth, and well-tuned, the backgrounds provide a very pretty, if sometimes bland, backdrop for some really good solo work. The group is at their best on mellower, sleeker, and more soulful tracks like Wrong Impression, Arizona, Fallin', Two Satellites and Always Be Around. The up-tunes don't rock enough, and lose the feminine groove that the mid-tempo tracks have. When they sit in this groove, though, the result is a wonderful, relaxed, feminine sound with a solid low end and gentle trebles.

The Sils' soloists are their biggest strength. Di Johnston opens the disc with a confident turn on Hit ‘Em Up Style and breathes new life into Roam, which I was semi-dreading after hearing too many mediocre covers of it. Blaire Reinhard gives my favorite performance of the disc on Arizona, with wonderful vocal control and emotional commitment. Her turn on Respect is quite commendable (covering Aretha is a daunting task, at the least), although the energy drop that accompanies a mid-song switch to Rescue Me destroys the track. Other soloing highlights include Amber Payne's soulful performances on Fallin' and Video/I Do (with Tip Haigler doing a great job with the India.Arie half of the song), Summerlynn Lotz's sweet leads on High and Dry and Wrong Impression, and Melody Akhavan's emotional turn on Two Satellites.

After a strong opening, the disc starts hitting snags that could have been dropped from the disc. The Rescue Me switch in Respect is the first instance of poor choices marring the disc's quality, but bigger problems arise with I Will and Wham!'s Wake Me Up Before You Go-Go. I Will suffers from low energy, and the Wham! track just doesn't fit the group's strengths at all. The second half of the disc remains strong throughout, slowing down with Eve right before closing with an energized That's the Way.

Lotz arranged every track on the disc except one, and this is evident from the consistent sound of the After Shock. It's a pretty sound, and the soloists provide enough excitement to engage this listener, but don't pick this up expecting a varied terrain. Otherwise, have a listen. There's a lot of nice stuff here.

The Sil'hooettes of the University of Virginia have a long history in the world of collegiate a cappella. From their first album, Funkengruven', to their latest release, After Shock, The Sils continue to produce a solid, well-developed sound. This all-women group is only beginning to experiment with how far the female voice can go, however, and After Shock is a weak submission against other recent collegiate women's releases. Nevertheless, this album is a fine collection of pop hits, oldies, and of course, that ever-present set of "chick songs" largely catering to a female audience.

Summerlyn Lotz is credited with arranging all but one of the fourteen songs here, which plays to both her benefit and disadvantage. Most pieces sound incomplete, with many gaps in what would be the tenor section in mixed or all-male groups. I Will illustrates this point, with a catchy and fun background vocal to support the solo, but the vocal distance between the altos and basses leaves the song sounding hollow. Fallin' is a dead-on arrangement of the Alicia Keys hit, but soloist Amber Payne struggles to reproduce the belted notes and vocal turns of the composer herself. Wham!'s Wake Me Up Before You Go-Go is a spunky number soloed by Mandy Corrie and supported by great vocal percussion from Karen Partlow, who stands out on Wrong Impression as well. The Sils should feature Karen, who has a solid understanding of women's VP, on more pieces. Many other songs on the album use a grunt-like sound to force out a beat that sometimes clashes with the tone of the lower sung notes. Roam represents the best of Summerlyn's talent.

All in all, this is a good submission and a nice compilation of pieces from The Sils. There are no real stand-out pieces or soloists, but the arrangements vary so much that one might never suspect they're all by the same woman. Future albums should explore a more diverse selection of songs and experiment with studio effects, but After Shock is a nice step in that direction.