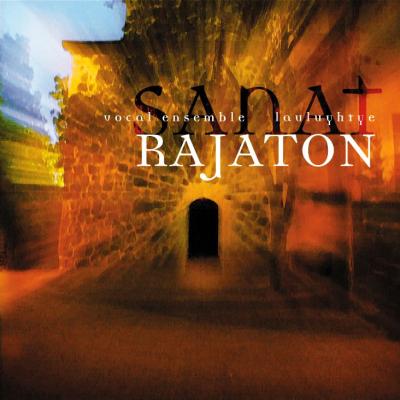 The liner notes to Rajaton's Sanat translates the title as "healeth". On its own, the verb is ambiguous as to subject; "he", "she", and "it" are all candidates. Given the songs sung on this album, of course, the ambiguity is ostensibly eliminated: the healer is God. But the members of Rajaton are sophisticated interpreters of their music, more sophisticated, in fact, than straightforward, and thus their "Sanat" — as word, as album — is neither wholly ambiguous nor yet specified. Slipping from traditional to classical to spiritual and beyond, Rajaton's Sanat doesn't deal with doctrine as much as it dwells on the emancipatory probabilities of sung faith.

The singers are excellent, individually and together. Blend is transparent, expertly setting the stage for the group's stranger flights of musical fancy.

A favorite is Weary in Well-Doing, a bit looser in approach than the others, jazzier, anchored by a commanding soloist and, following on ten tracks of lusher, stricter devotion, somehow harrowing. Also excellent is the subdued, almost grim opening to Iltavirsi; this reviewer wishes for a better understanding (any understanding!) of Finnish — surely there is complexity built right into the intonation.

One track I did not favor is the opener, which sounds a bit lounge-like in tone. This would work but for a sort of hesitation or disagreement among the singers. A contrast is Kaikki maat, unabashedly uptempo and instrumentalish, which works because it's wholly bought into. Other listeners may wonder, as I did, at the echo of Loch Lomond in the chord progressions of Were You There? — another instance of the depths to which these wonderful singers plumb their difficult and rewarding music.

All told, another fascinating album from Rajaton, losing only a bit on repeat listenability because I like to leave my serious thinking to language and literature. Listening to Rajaton is like sharing in a particularly deep conversation outside one's area of expertise: exhilarating and exhausting at the same time. Listeners should feel privileged to be let in, and rush to hear Sanat.

When I learned I'd been assigned the Scandinavian sextet Rajaton's third album for review, I was quite excited — their second album, Boundless, was an unexpectedly pleasant surprise for me, and I was eager to hear what these talented Finns had in store for me next. Then I heard it was an album of sacred music, recorded live and mostly sung in Finnish with some Latin, medieval Irish (yikes!) and a bit of English as well. Forget the fact that I'm Jewish — I love sacred music of various religions as much as the next guy — but an hour of mostly Finnish sacred music? Oy vey!

How wrong I was.

After three albums, I think it's now safe to say that when you see the name Rajaton, you need not have any worries about the singing. Together, they blend seamlessly, with pitch-perfect intonation, fabulous group diction, and a lush, rich sound that envelops you like an old blanket. And as individuals, they are no less wonderful, especially in the opening track, Aurinkolaulu, a spiritual in the spirit of Take 6, in which each of them has a chance to take a turn at a solo.

So what about the material? Well, on their last album, the group not only provided translations for every song but included a personal note regarding each track. No such editorial comments are in Sanat's liner notes, and I'll admit, I missed them a little. But truth be told, on this album, they're not much needed. The overall theme of the album — a heartfelt Christian spirituality shared by the entire group — is borne out in the selections themselves, and there is little need to explain the group's connection to each song. The translations from Finnish are extremely evocative; such that the themes and emotions being explored are easily understandable even to those of us whose Finnish is a bit rusty. One can only hope that some of this material is or becomes available to the general public. If it does, no doubt we'll be hearing quite a bit of Mia Makaroff's skillful, moving and flat-out gorgeous arrangement of Were You There and maybe some more adventurous groups will tackle the aforementioned jazzy Aurinkolauluor the equally fun Kaikki maat, te riemuitkaatte.

That said, there are some occasional lulls to be found, since the bulk of the material shades towards the slower tempos. Cases in point would be Vain Taivasta Kukkaset Katsovat following a beautiful Stabat Mater, though the former is rather short so the progression is not too troublesome. More difficult was the quite dissonant Iltravirsi, followed by the not-very-Irish-sounding Torramat do noebaengil, followed by Nearer, My God, To Thee — all impeccably sung as individual tracks, but a tad much to take in succession.

A nod to the recording engineer is most-deserved as well. So often, the hoped-for benefits of recording live in a church or concert hall never quite show up on the finished product. So often the ringing quality, reverb and echo provided by such a setting end up overwhelming the group and rendering the blend to mush. Kudos then to Ilkka Herkman for preserving the "open" sound provided by the venue without sacrificing crispness of blend and the group's dynamic subtleties.

As for buying this CD, or indeed listening to it more than once or twice, it really depends on who you are. If you love sacred music, buy it. Period. If you love incredible small ensemble singing and are willing to broaden your horizons a bit, buy it too. If you're just the average a cappella fan, you're likely to appreciate this album if not thoroughly enjoy it. Think of it like The King's Singers — if you only want to own Good Vibrations and The Beatles Connection, then wait until Rajaton comes out with a more mainstream album. But if you loved the KS Sermons and Devotions or others like it, then order this album ASAP and you won't be disappointed.

Sanat combines an obvious respect for religious traditional a cappella music with contemporary choral style. Pieces like Benedic Anima Mea Domino are choral, yet feature the parallel chords of chant and early church music. The group chose to record Sanat live in a church, and sang a third of the pieces in Latin. Stabat Mater, a lament honoring Mary, has chord movements like a classical romantic choir piece. It's all very "in the style of the chapel".

But unlike many other religious choral albums, every song on this album is fresh and unique for two reasons. First, Rajaton wrote three pieces on the album and commissioned the rest from five Finnish composers. With extensive use of dissonant chords and dissonant passing tones, each composition feels very 20th-century despite the classical languages and spiritual meaning. Fans of Arvo Pärt's dissonant choral work will love Sanat. Iltavirsi, for example, sounds like a Pärt requiem in its use of dissonance, but the song also features a brief round, a drone, and church choir harmonies in the ending. Aurinkolaulu — sort of a modern-day proverb — begins with a brief unison chant, moves to a contemporary jazz-style solo, and ends with a big, sliding dissonant chord, all in Finnish. It's so unique that it's hypnotic.

Second, the album features four languages. Aside from their native Finnish, Rajaton proves adept at Latin, English, and Old Irish. The group doesn't always match the language to the style, creating interesting contrasts. Kaaki maat, te riemuitkaatte, a song of praise, is sung in Finnish and arranged and mixed like any American collegiate a cappella pop song. This may be 100% run-of-the-mill religi-pop to the Finnish, but to my American ears, it's pretty interesting.

So how well does the group perform this unusual music?

Rajaton's choral training is evident throughout the album in uber-pure vowel sounds, near-perfect intonation, and effortlessly crisp enunciation. The breath control and phrasing of soloists, especially the women, creates beautifully-delivered melodies that are powerful yet tender. The group is widely dynamic, moving from a hummed drone to a dissonant power chord without even breathing. Sanat features solos that range from haunting to forceful to tender and warm. Some solos feel slightly raw, with an emphasis on emotion rather than finesse.

There are a few small flaws. A few soloists have moments that are a bit off pitch. The church's reverb is gorgeous and organic, but some cutoffs aren't as clean as they could be. The balance is occasionally skewed toward the higher voices, and sometimes a soprano or tenor sticks out. Lastly, if you have a subwoofer, you'll notice a quiet, ambient rumble on every track.

However, the fact that Rajaton executes this well on a live recording in a church is a testament to their skill. The group paints classical religious content in a contemporary choral light through outstanding composition. I don't speak Finnish, Latin, or old Irish, but for me, Sanat means a unique fusion of religious choral a cappella.