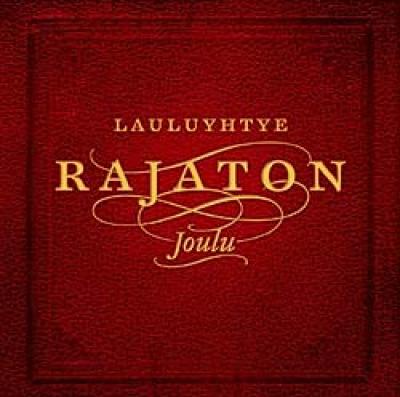 Joulu is a two-disc set of Christmas music from Rajaton, a small mixed Finnish vocal ensemble whose name deserves to be spoken in the same breath as some really amazing groups. Because Rajaton, too, is really amazing.

The first disc especially is a nice change from traditional Christmas music, or even the more common a cappella holiday fare — the fun Finnish tongue notwithstanding, Rajaton brings its usual deft touch, its fascination for jazzy, difficult arrangements, and, taking center-stage from the wings of previous albums, a sense of whimsy that is always sweet but never cloying. This is confirmed by the squat, mischevious- or even confused-looking Santa Claus hidden behind the second disc. What's that gnome up to? Whatever it is, it shoots through the songs. Some standouts: Ketun joululaulu, sounding like a stuffed animal adventure holiday; the haunting Varpunen jouluaamuna; and Jouluyö, juhlayö — even I could figure out what that means!

I'm less thrilled with Joulun neiet, which sounds overprocessed in comparison with the other tracks, less like Rajaton and more like uncomfortably fused Euro-pop, and Joululaulu, which turns velvet fog into velvet slog — too, too slow.

The second disc was recorded not in a studio but in a church, and features music that is more traditional-sounding but still unlike most of what one has collecting dust in the closet eleven and a half months out of twelve. The same unbelievable blend pervades the disc. Some favorites include Jeesuslapsen joululahjat, whose gently rocking motion suggests melancholy but not lament (showing again the fine interpretive lines these singers are able to tread, as if walking on water); En esti valtaa, loistoa; and especially Toivioretkellä, which introduces lovely lone baritone and soprano melismata only to combine them into a gorgeous ending.

(Is it my imagination, or is there a slight intonation problem in the brief soprano lead at the beginning of Hiljene, maa? Could it be from echo?)

Consummate professionals, the six singers of Rajaton display the same enviable blend and light musical touch that made me praise their previous albums so effusively (not to mention pick them as my Picks of their respective years). I was able to spend so much time trying to imagine the meanings of each song, precisely because questions like blend, tuning, and energy never had the chance to be raised. Rajaton is like a very few, very special groups in terms of irreproachable musical skills. The Real Group comes to mind. Take 6. Chanticleer. Like those legendary groups, Rajaton is flawless but not stuffily so. Their Joulu is a thoroughly enjoyable album.

With their first three albums (the second and third of which I have heard), the sextet known as Rajaton (meaning "boundless" in Finnish) has established itself as one of the highest caliber a cappella ensembles working today. Seamless blend, flawless tuning, impeccable diction, nifty arrangements of original material — many composed and/or arranged by the group's endlessly talented Jussi Chydenius — and faithful renderings of classics (primarily in Finnish, sometimes in English or another language) are all what we've come to expect from Rajaton. On Joulu, they certainly don't disappoint — hence all my 5's on the individual song grades.

That said, will you want to buy this album? Probably not.

Heck, on their website, the group readily admits that this album was not intended for the international market, and that's not terribly surprising. It's entirely in Finnish (their two previous efforts had at least one or two numbers in another language); it's all Christmas songs, almost all of which Americans — and perhaps anyone outside of Finland — will not know; and, unlike their two previous albums, the liner notes don't have an ounce of English to clue you in to what's going on.

On the other hand, one might argue that perhaps this is the purest of aural experiences: no preconceived notions, no extra-musical reference points, basically nothing to go on except the music-making itself. That sounds all nice and good, but I'll admit that I don't buy it. The first CD, recorded in a studio, at least has some uptempo, modern material that engages even a listener unfamiliar with the language or the material. The second CD — and mind you, I love my traditional Christmas music as much as the next guy — was difficult for me to get through, if only because there was almost nothing I could grab hold of and feel comfortable. It was recorded in a church and features famous Finnish classic Christmas songs, some contemporary material, and some new arrangements of traditional music, most with a much more formal, choral feel. Truth be told, the songs started to blend together into Finnish mush — a very pretty mush, mind you, soothing and beautiful, but boring after a while.

The first disc does feature three tracks on which I can comment more informedly, specifically because they are Finnish translations of Christmas carols well-known in America: Jingle Bells, Silent Night, and Mel Torme's The Christmas Song. As for Jingle Bells, all I can say is that I wish this track were available as a single, because you MUST hear it. It's probably not worth the $25 to buy this double CD just for this track, but if there is ever a Voices Only: Christmas, Part Deux, this had better be on it. The varying meter used throughout the piece (a whole lot of 7, and something that I think is best described as 12/2 but I'm not certain) is enough to make your head spin, and the various vocal styles used, including a slow swing and a quick scat-like jazz are fabulous. As for Silent Night and the Velvet Fog's tune, the highest compliment I can pay them is that, rightly or wrongly, they reminded me of some of Yumikoa Matsuoka's arrangements of classic jazz tunes for Vox One back in the day.

All in all, I have no doubt that this is an absolutely wonderful album for Finns everywhere. But of the three Rajaton albums I've heard, it's far and away the least accessible for an American audience. For everyone else, if you want one Rajaton album, buy Boundless. If you want two, add Sanat. If you're a diehard fan, buy this one too, but you've been warned.

Do the words "Joululaulu" and "pukki tietaa" mean anything to you?

If the answer is "no" — as is the case with most of you reading this — I should warn you: if you buy this album (and you should), you won't have the foggiest idea as to the meaning of any lyrics on this disc. But you won't care.

If the answer is "yes", then you're probably from Finland, and there's a high probability you've already heard of Rajaton, and you're perfectly aware that their holiday album is, well, sublime.

In short, Rajaton's Joulu is one of the finest a cappella discs I've had the opporunity to hear. The album features a warm, perfect blend, perfect tuning, bold energy, vibrant dynamics, tasteful studio involvement, and lively, varied arrangements. The combination of these elements is a top-notch recording.

But, Mark, this is just an album of holiday tunes sung in Finnish — it's not supposed to be better than the latest disc from <Insert name of respected vocal band here>!!

The performances on this disc are consummately professional, with a set of soloists and backing voices who never fail to give each note direction, nuance, and attitude. In a refreshing, positive way, the vocalists eschew showboating and virtuosity in favor of a team effort and a less-is-more approach on every song. They conjure up beauty by squeezing out every emotional peak and valley they can muster with fluid, rich dynamics. The songs are never stagnant, never boring, and never fail to reach their peaks. They negotiate key changes and tonal shifts as effortlessly as an Olympic skater nailing a triple axle. They make a cappella seem easy.

The production on this album walks the magical line between not enough and just enough studio presence. The analogy can be best drawn with make-up; it's most effective when you can't tell it's being worn. That's precisely the case on this disc — the production is present, with mostly wet mixes and a variety of effects — yet the studio never gets in the way, never distracts. Whatever doubling of parts was done was accomplished tastefully; the group sounds thick and close-miked without ever layering themselves into an Enya-like death. The last disc I can remember striking such a balance was Cadence's Frost-Free. The first eleven tracks of Joulu match the warmth, clarity and perfection of that disc.

Highlights on this disc are plentiful. During the fourth track, Ketun joululaulu, I particularly look forward to 1:47 into the tune when the clear, rich tenor of Hannu Lepola emerges through the lush backgrounds like a lead trumpet and confidently soars with a high melody. Rajaton's version of Silent Night is filled with broad rises and falls and twisted, creative tonalities. The opening track, Joululaulu, is a catchy and sleek groove which gets stuck in your head. Even if you don't have a darn clue what the hell they're saying.

The only drawbacks to the album are minor. Some listeners may not enjoy the second disc in comparison to the first. While the first is essentially a vocal band recording with thickened bass, intermittent vocal percussion, and tasteful effects, the second disc sounds like a one-mic-in-the-church recording. The quality of the tuning, blend, and dynamics does not suffer, but the warmth and closeness of the studio are missing to a degree. Yet, it is as fine a church-style recording as I've heard.

I would strongly recommend this album. It won't be the holidays for another nine months, but you're sure to find joy in Joulu any time of the year.