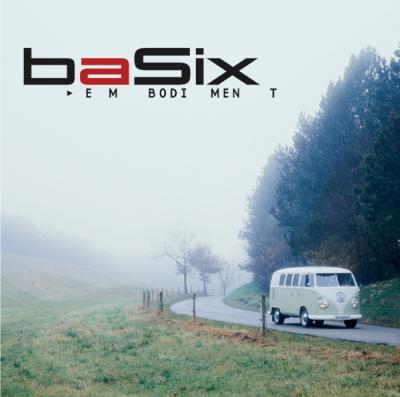 "Holy giant leap forward Batman!" was about the best phrase I could come up to describe my overall reaction to the Scandinavian sextet baSix's second full-length release, entitled Embodiment. Mind you, their first release The Grass was no slouch of an album, and I eagerly looked forward to their next CD. But I don't know that anything could have quite prepared me for this.

On their website, the group suggests that this album features "a touch of America". Might I suggest that this is a bit of an understatement? Having admired the work of The House Jacks and m-pact, the group enlisted Deke Sharon and Brett Quentin as producers for this album (the producing duties split on a track-by-track basis about evenly between them), signed up renowned a cappella studio wizard Bill Hare to mix the album and, just for good measure, threw in some VP from Hookslide's Jon Pilat on one track. As far as the modern a cappella scene in the US these days, it doesn't get much more "American" than that, and it permeates every aspect of this album.

Whereas their first release featured relatively tame covers and eclectic originals, this album grabs the listener by the ears from the get-go and doesn't really let go until 2/3 of the way into the album (if at all). Featuring a much wider, expansive stereo sound, a great deal more vocal processing (say what you will, it shows the group off to great effect), a significantly more sophisticated approach to vocal percussion than the first album's effective if somewhat boring chest-pounding/snapping/clapping, and arrangements which recall the best of Rockapella, The Blenders and the aforementioned House Jacks and m-Pact, the men of baSix clearly want to stake their claim for a place at the table among their American a cappella idols — and they make a heckuva case for themselves.

Sure, it could be argued that in bringing all this American influence to bear on their music-making, the group has lost some of its native originality. Indeed, the lyrics on the numerous original songs on this album are definitely a notch below those of the first album in the literacy and sophistication departments, falling frequently into the pitfalls of American vanilla-pop cliché. And the "hooks" on a number of the tracks — specifically Right Now and My Heart Won't Work — feel almost interchangeable with any number of the boy-band hits from the last few years. But the fact is that these guys were clearly influenced by American rhythms and sounds long before Deke, Britt and Bill got their hands on them. Plus, they always keep it interesting — whether it's a complete reimagination of The Beatles' Come Together, a stunningly produced take on Prince's Purple Rain featuring boy sopranos from the Herning Boys choir, the latin grooves of Dining Out (very reminiscent of their Scandinavian colleagues The Real Group) and Lauren Wood's Fallen, or cheeky lyrics of Sweet Misery, whose chorus, for my money, should become the theme song for the entire collegiate a cappella community (it begins "Come hook up with me...").

I'll admit that I sometimes have to fight a certain level of a cappella prejudice — call it "American Pride" — when it comes to a pop a cappella group from overseas, especially one which is so clearly trying to carve out its niche in territory which is already well-populated, indeed dominated, by the best of the US groups. But with this album, baSix has gone from a European group I admire from afar, to a personal favorite from whom I want to hear anything and everything they have to offer. Simply put, these guys rock, and this album is a must-buy.

It's always disappointing to give a group a lower score than on a previous album. That goes double when the previous album in question earned a 5. baSix' second full-length release offers the same winning young hotties and strong fundamentals as their debut, The Grass. Ultimately, however, many of the tracks left me cold.

I was also perplexed by the original track Dining Out, which was so evocative of The Real Group's classic Chili Con Carne that it almost comes across as a parody. The Real Group, however, probably wouldn't add a cringe-worthy Euro-rap spoken bridge.

On the other hand, the CD has a couple of terrific highlights, including an innovative take on Purple Rain that manages to integrate classical and soul and a spare, sexy original (As One) that rises above the earnest cheese of some other originals. Morten Kjaer masterfully handles the leads on both tracks.

This is a strong record overall; I just wish the genuineness of the best tracks had come through on the rest. Too much of this music is inane, wimpy pop. Singers this talented deserve better material. I'd still love to hear something in Danish from these guys. They often seem less than 100% at home in the repertoire they choose. I bet they'd wail on their home turf.

This early in my career, I can't give anyone a perfect score of all 5s. Though baSix comes damn close.

The latest release from gold album-earning baSix is truly the Embodiment of the Danish group's journey to elevate standard vocal band pop music into something universal, and well, perfect. And they nearly succeed on all accounts.

Buy seven copies of the recording. Trust me. One will actually be played and the other six will begin the shrine that you erect to each member of the group. Yeah, it's that good.

I could wax poetic for 5000 words instead of our usual 500 on why this album is one of the best I've heard in ages. But I won't. Instead I will give you this small list of names:

Morten is everywhere on this disc, writing lyrics and music and arrangements for most of the songs and pulling out some of the most brilliant and captivating solos I've heard. Gah, just incredibly gifted and exquisite. He could compose and sing a song about the Magna Carta and I would sit enraptured. Everyone pretty much agrees that Donna Summer's Love to Love You is the female equivalent of sex on record... I'd now have to say that Morten's solos on Right Now, Purple Rain, My Heart Won't Work and As One vie for the male title.

The album is produced by Britt Quentin (m-pact) and Deke Sharon (House Jacks) with additional support from Bill Hare, one of the current wunderkinds of sound production. With the help of their producers, baSix has created a richly textured mosaic of sounds, feelings, moods and atmospheres, blurring the boundaries of jazz, pop, rock, dance, R&B, and light comedy with Embodiment. You can hear the influence of the producers on individual tracks (notably the m-pact inspired work on Sweet Misery and Right Now and the House Jacks influence on Purple Rain and If You Were My Woman). Hare meshes these disparate styles into a cohesive, yet unique, soundscape that supports and highlights the talents of baSix.

And they have talents aplenty.

The arrangements are intricate and intelligent. The musicality and musicianship of these guys are beyond reproach. Each one of these guys has superstar written on his face and pouring out of his vocal cords.

In fact, the only fault that I can find with the album is with the songwriting on some of the songs. Occasionally, the writer will create a lyrical line that requires overlooking some pretty vapid thought processes. Some of the imagery is stunning, but reminds you that some words in the English language should never be strung together. You can miss the triteness when they are sung spectacularly, as they are here, but when read as the poetry songwriting is supposed to be (a bias I learned in grad school), you have to laugh out of embarassment. Yikes.

But that comes with the genre, so I forgive them this small transgression. Those skills will grow as the group matures, and the fact that everything else is so devastatingly brilliant removes all doubt that they will perfect that aspect of their craft as they have everything else.

Embodiment is available for ordering from Mainely A Cappella, Primarily A Cappella, and also from the Danish CD-site: www.rillen.dk.

WARNING: This CD is copy protected, and as a result, it does not work with all CD players.