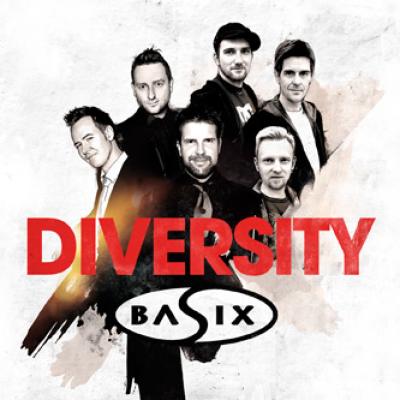 Another Basix album, another album full of contradictions. Perhaps that's what they were going for when they titled the album Diversity, but somehow, I think not.

Of all of Basix's albums since 2001, this one may just be their most frustratingly terrific.

Explaining the terrific part is easy: the songs are generally solid originals, with engaging and sophisticated lyrics, sometimes conventional, sometimes with unexpected melody lines, dressed up in backgrounds that are typically hyper-produced, less often rather spare, but always harmonically interesting, with slick and polished production. There can be no question that this sextet is fantastically gifted and wonderful at what they do.

Pourquoi frustrating, then? Or to use Basix's native Danish, "hvorfor"?

First off, I know from their prior four works how creative and inventive these gents can be, especially when they re-invent songs by other artists. They've never really been able to bring that level of creativity to their own original music, though this album is definitely a step in the right direction. There are still way too many boy-band vanilla pop arrangements here, especially for a two-CD set, and especially when you hear on songs like Said I wanna go and High on life (in the slow lane) (the latter being my personal fave) what Basix can really do. To their credit, though, the sophistication and intelligence of the lyrics are not only a huge step up from the originals they featured on Star People, but they're among the best I've ever heard — maybe actually the best — from a group for whom English is a second language.

On a related compositional note, the consistent shunning of a bridge in the vast majority of songs undermines the group's efforts to take the listener on a meaningful musical journey. Yes, you can craft a successful song without a bridge section. But rarely a bridge in sight, Basix relies so heavily on their lyrics and arrangements which, while interesting, are oft repetitive. Consequently, once I'd heard verse A and chorus B, there were only so many times I wanted to hear A-B repeated. And simply repeating B over and over — as they are wont to do — was not as satisfying as it might have been had I been led to a final, explosive (occasionally modulated B) via a bridge passage, a.k.a. C.

Lastly, if you listen closely to the lyrics, this is one pretty depressing and/or angst-ridden and/or cynical and/or bitter two-CD set. As much as I enjoyed it, by the time I went through the first CD, where the subject of pretty much every song is either frustration or anger or criticism or despair — be it with oneself, one's lover, one's mind, or one's life — I wasn't entirely sure I wanted to listen to another whole CD of similar themes. Thankfully, there's a bit more on the second CD to be hopeful about, but for an album called Diversity, this one lives in a pretty dark emotional place that can be a bit overwhelming at times.

If you don't yet know Basix, I might recommend Embodiment as your first purchase, but this is likely a close second, notwithstanding the critiques above (the numerical scores speak for themselves). And if you already know Basix, and you don't yet own this CD, what the heck are you waiting for?

Delivering a steady flow of radio-ready pop and R&B music, Basix's new double album of all a cappella originals is a kaleidoscope of pure pleasure. Diversity is extreme bliss for the die-hard fan, but may be a bit overwhelming for the more casual listener. At nineteen tracks, it is impossible to love every one of the songs that the group has penned unless you happen to love every sound that comes out of these guys' mouths (and for the most part, I do, I really do). Basix is no stranger to long discs (sixteen tracks for Star People), but the question remains why they made a two-disc set their first time out with all originals. I'm glad they did because it means more music for me to enjoy ... but it was a pretty risky gamble.

You would think that by the second decade of the 21st century, an album of original songs wouldn't be such a rarity in the a cappella community. And yet it is. The good thing to note is that the members of Basix have all upped the ante when it comes to writing lyrics and composing music that so defines the Basix sound and sensibility. While some of the turns of phrase may get lost in translation when sung outside of Denmark — meaning a little campier and clichéd than possibly intended — the music makes you move and groove and puts a serene smile on your face even when they are singing the saddest ballad.

Diversity is an exceptional compendium of the Basix style. The double disc features the gritty urbanesque Why do we always wait, torchy ballads Cry out for muses and disc two's A thousand years, the cheeky yet thought-provoking pop ditties So much better and Think twice, up-tempo uplifter High on life (in the slow lane), and my favorite niche that they've recently carved out for themselves, the Middle Eastern-inspired dance extravaganza (the title track Diversity). Disc one, which ends with the delicious bully smackdown Think twice, is the stronger and more varied of the two CDs.

Lead voices here reach new heights of awesomeness. Anders Orsanger has truly blossomed, completely commanding the gentlest ballad in A thousand years and jamming and dancing with the best of them on Said I wanna go. And Christoffer Brodersen has added so much since joining the group. He partners well with Peter Bach to make the more urban numbers sexy and fun, and then totally kills you with his soaring tenor on Cry out for muses. Toke Wulf's warm baritone will more than melt your heart and bring a tear to your eye while listening to the ode to his father A thought for you. Niels Norgaard likes to have a lot of fun with his solos. And John is John. He is Basix.

The production is stellar; the group decided to go with a plethora of producers from around the world. Freddie Feldman of Vocomotion seems to have found a new calling by aligning himself with this group. His work on two of the grooviest tunes Why do we always wait and High on life (in the slow lane) is excellent, and the gut-wrenching emotion he brought out from my favorite song Cry out for muses could make it one of the best songs of all time. Torben Lysholm, Francesco Albanese, John Clark, Stig Kreutzfeldt, and Bill Hare round out the cabal of wonderful mixologists. Hare knows these guys inside and out, which is evident on his sweetly deft touch with the radio-friendliest of the tracks, A thousand years. Man can work a ballad.

Diversify your listening habits by getting the newest album by Basix. You'll probably wear out the first disc from repeated play and thoroughly enjoy more than a few of the tracks on the second one. The thought of the sure-to-come-soon greatest hits endeavor is making me Cry out for muses, asking Why do we always wait when I should be High on life.

Basix is telling a story. It is the most patronizing story ever told, but it's a story nonetheless. Make no mistake, Diversity is an ambitious work. It is the sort of album only a great group would be allowed to produce.

Alas, it is a failure. To paraphrase one particularly galling tune, I'm sorry, but I think it sucks.

Let's get this much out of the way: Basix is a collection of outstanding singers. Outstanding tuning, excellent dynamics (remember those?), clever percussion. In other words, this is precisely the group you want to see producing seventy minutes of original material.

The final product, however, is bogged down with a sincerity bordering on contempt. Let us consider the title track on the album. It opens with a halo of hah-nahs, before burrowing into a menacing critique of, well, those who are not diverse.

The track evokes a Middle Eastern vibe, but in the most pandering way possible. The message of the song is handicapped by poor phrasing, often resulting in that hallmark of college band music that implies double negative. Why don't I try to give up preaching Babel and bigotry? Maybe because it's hard to ascertain precisely what it is Basix wants me to do. Am I to do what Danes do, or is that a bad thing?

The whole album is pocked by amateurishness. Cry out for muses gives us ruminations on monochromatic gray horizons, accompanied by some nominally atmospheric whistling. Has a song about feeling trite ever felt so, um, trite? The group gratuitously borrows from reggae, rap, jazz. So did Color Me Badd. Feel me?

They even do the same standing in the ocean thing that Vox 11 did in their liner notes, which comes across as a bit hyper-serious.

If the goal is to prove that a cappella can be just as cloying and predictable as dull pop music, Basix has succeeded with aplomb. Perhaps I should not understate the achievement. I could count on one hand the number of vocal groups who could finesse the manic chord progressions of High on life (in the slow lane). Sure, it sounds like the backing track for a Nickelodeon sitcom, but it's still well done.

That said, I defy you to listen through the opening of A thought for you without skipping the track. I listened because I had to, and I wouldn't recommend it.

The lack of innovation seems to hamper the soloists, each of whom seems to take the material far too seriously. None of these guys deliver an engaging, tonally appropriate lead. I mean, these are songs about pulling out hair, gaining weight, and the foolishness of sleeping around. Pep it up, yo.

All said, I get why Basix went in this direction, and I have no doubt that their fans (and, possibly, my fellow reviewers) will overlook the banality of the tracks themselves. If there is a group that can carry a cappella into the mainstream, this is it. But, for all its pretention, this album won't do it. Not by a long shot.

To order this album, visit www.basix.dk, iTunes, or A-cappella.com, or go to any Danish music store.