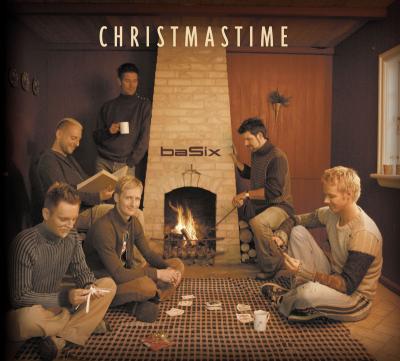 Despite the overabundance of Christmas and or sacred music I've reviewed in the last few months, which has included Banana Boat's Swiatcznie (Polish), maennerquartett schnittpunktvokal & Kvartet Vita's Weihnacht in Österreich(German & Slavic), and Resting in His Praise from Voice of Praise (English), I was still very much looking forward to the final stop of my international audio tour in Denmark, with the 2-time CARA-winning Christmastime from baSix.

To say I was disappointed would be an overstatement. I've said it before and I'll say it again: these guys are amazing and although I have not heard all of the other CARA nominees in the Religious Album category, I'm sure baSix's award is well-deserved. Certainly the CARA for Best Religious Song for Santa Claus Is Coming To Town was a no-brainer. But to some extent, these gentlemen are prisoners of the expectations that come with their excellence and, confined within the limitations of a strictly Christmas album, those talents don't shine quite as much as they usually do.

The pros of a baSix album are typically fabulous, energetic ensemble singing with great blend and groove, unusual interpretations of known songs, and a musical sophistication in the melodies of the original songs that consistently engage the listener. The cons are few but they tend to show up in the lyrics and the occasional tendency toward musical cliché. Add to that the unique challenges that a Christmas album presents — how to take classic material and make it fresh and how to get a listener to accept new material for a holiday that is so steeped in tradition — and it's perhaps unfair of me to be too critical.

But critical I shall be. The original material on baSix's album sadly has gone downhill since the ambitious work on their debut album The Grass. The lyrics have become less and less sophisticated and what once was musically interesting has degenerated into vanilla pop, unworthy of the talents these gentlemen have proven they have. Dare I say that Deke Sharon and Brett Quentin not returning as consulting producers on this album (as they were on Embodiment) may be partially to blame? I can't know for sure but there are musical issues (originals with melody lines that don't really go anywhere; the over-slickness of River; a few random, misplaced jazzy chords in bizarre places), lyric lines (the worst being "And now I'm kicking in the snow/wishing it was my butt/Perhaps tomorrow's the day/to give it another shot"), playlist choices (Candlesong is a poor choice for an opening track; not sure I understand the point of Christmas Bonus, even as good as it is) and even liner note choices (why no lyrics/translations for the Danish originals we're least likely to understand?!) that might have been aided by the objective eye/ear of an outside producer, besides the group and Bill Hare.

Speaking of Bill, his work here is excellent as always but I do worry that these guys have fallen a bit too much in love with the polish that a studio wizard like Bill offers them. On Embodiment, the studio work felt like a creative contribution that served the music. On Christmastime, the studio work draws a bit too much attention to the homogeneity of sound that baSix seems to prefer.

And yet, even with its flaws, it's still a terrific album — probably the baSix album I'm least likely to listen to again, but I would still suggest buying it and burning Last Christmas, Santa Claus is Coming to Town, God Rest Ye, Merry Gentlemen, and This Christmas onto your favorite Christmas mix. Then tell your party guests in December that the singers are Danish and all of it is a cappella and watch their jaws drop.

Let's start off by saying that I'm a Scrooge. The "Repeat Listenability" score is totally based on the fact that I barely like to listen to holiday music at Christmastime, let alone trying to listen and appreciate it six months later. If you are one of those people who don't mind a little Christmas cheer in July, you will be completely giddy picking up this CARA-winning album from baSix.

So while you won't see any comments as effusive as in my last review of the group, I will say that it's a top-notch album, worthy of being in anyone's collection. Okay, I lied. THEY RECORDED WHAM'S Last Christmas!!! HOLY DREIDEL, BATMAN! What a Soft Soft Present to me! Their rendition is a loving homage to the original, yet startlingly unique in that baSix style.

Det Er Hvidt Herude would be a song that I would listen to year round, especially since I have no idea what they are saying. I can appreciate it for the great song that it is and not have my pesky anti-holiday bias cloud my judgement. Conversely, I was jarred repeatedly out of loving their award-winning version of God Rest Ye, Merry Gentlemen because of my nitpicking pronunciation tic. I can understand why the song won, it's packed with energy and creativity, but each time I heard "Beth-LEE-helm" I crumbled a little on the inside. Such a minute thing, but hey, you have to find the cracks in near-perfection somewhere.

Former member Morten Kjaer (yay!) makes an appearance on this album as lyricist of Soft Soft Present, one of the three originals on the disc. His pop style is completely evident throughout the track. In fact, with Niels Norgaard contributing the music and arrangement, Soft Soft Present seems very reminiscent of Living and Loving It. Candlesong, penned by Peter Bach, is the strongest of the three. It sets a very chilled, yet festive mood as the opening track. Actually, I would consider it more of an art song that happened to be set at Christmas; any date could replace the holiday references and the song would be just as enchanting. John Kjoller's Christmastime is by no means a bad song, it just gets lost admidst the bounty of riches.

The one puzzling moment is the inclusion of not one, but two arguably unnecessary renditions of Santa Claus Is Coming To Town. The second version is listed as the Christmas Bonus on the CD. Alas, it wasn't, though it was miles better than the official version.

Who knows, maybe if I listen to Christmastime a few hundred more times I won't keep getting coal in my stocking.

It was a little weird listening to a Christmas album at the beginning of summer, but it made me aware of the songs that evoke that Christmasy feeling despite the heat and the green outside. This success made me excited for the winter so that I can listen to the album in context of the season — probably the reason it won a CARA for Best Holiday Album and Best Holiday Song (God Rest Ye Merry Gentlemen).

The packaging is really neat, mimicking a leather bound photo album that you might thumb through in front of the fire while listening to a Danish a cappella Christmas album. What a coincidence!

Candlesong is an original by Peter Bach that provides a nice entrance to the album with a laid back groove that sets the mood for the rest of album. It seemed odd to me that George Michael's Last Christmas was placed second since it is very bittersweet and could potentially put people in a depressed mood which creates an uphill battle for the rest of the songs to cheer the listener up. The main message is "I gave you my heart and the very next day you gave it away, this year I'll give it to somebody special." But the song is very effective and I applaud the guys for empathizing with those who look to Christmas in the hope of happiness rather than the celebration of existing happiness.

Santa Claus Is Coming To Town is a mostly reggae interpretation with lots of time and feel changes to keep the excitement of Santa's arrival strong. I didn't understand a word of Det Er Hvidt Herude, nor is there a translation, but it was vary well executed in a peaceful chorale fashion that created a kind of mystical atmosphere. I wish I had a Danish friend to tell if that was the point of the lyrics.

John Kjeller's original, which provides the album name, Christmastime, is a soaring ballad that quotes A Visit From St. Nicholas by Clemens C. Moore ("Twas the night before Christmas and all through the house...") and expands on the mood and message of that poem. Joni Mitchell's River capitalizes on the floating melody over a pseudo-upbeat background that supports the sometime regretful soul-searching that happens around Christmas. God Rest Ye Merry Gentlemen is one of my favorite Christmas songs and it seems is one of the most malleable by thriving in baSix' mix of driving soulful sections balanced with gentle almost cooing phrases. This song definitely earned its CARA.

BaSix enlists Rikkie Boisen, Annette Guldberg and Karina Algren to add that rich female texture to This Christmas. The song really solidifies the image of a group of people gathering together and being thankful for each others presence in their lives. Morten Kjær and Niels Nørgaards Soft Soft Present is a fun and uplifting proposal to "let me be that soft soft present lyin' beneath your tree." Again, no clue what Dejlig er Jorden means, but I liked it all the same. Christmas Bonus is a slightly different arrangement of Santa Claus is Coming to Town. It acts like a refrain for the album and closes out the song with laughter.

Christmastime has a dualistic nature that I'm not sure baSix planned but is nevertheless well received. Usually, when something is referred to as "background music", it conjures images of tacky elevator muzak. In this case it's part of Christmastime's strength. You could put this on during a quiet night and enjoy the complexity of it or play it during Christmas dinner; it's subtle enough to enjoy to without distracting from conversation. I probably won't touch it again until December, but it has earned a spot on the regular rotation for then.

To order this album visit A-Cappella.com.

Editor's note: these reviews refer to a previously released version of Christmastime that may differ from the available version.