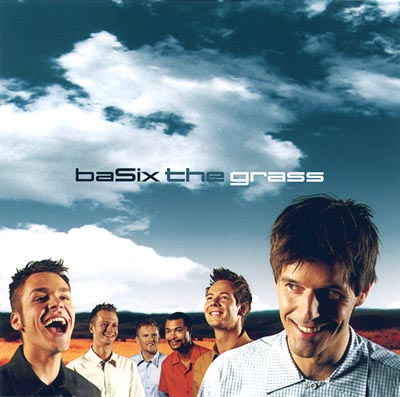 On The Grass, baSix, a six-man group out of Denmark, offers up an a cappella album that is clean, professional, and eminently listenable. And if "clean" and "professional" suggest that the album is too medicinal, know this too: baSix sounds good — The Grass grooves.

The recording runs the gamut from pop to jazz, blending both, and from an almost street-corner-ish a cappella style to more heavily layered and laden contemporary tracks. Although the singers sound most comfortable when the going gets jazzier, there's nothing wrong with the more poppy selections. Percussion is delicate, and rhythm in general not overbearing. Everything about each track seems to complement everything else. Perhaps the worst I can note is that the arrangements or the mix seem mostly top-heavy, with less emphasis on bass than many contemporaries might expect.

Five (of twelve) tracks are original, and they shine. Euro-pop is a typically happier venture than its American cousin. So baSix shows a lightness and humor close to Sting at his least melancholy, if not in fact near to McFerrin way back when (especially the title track).

Enjoyable all around, and well worth a listen on this side of the pond.

Watch out, The Real Group, you've got company.

Now admittedly, the only Swedish, Finnish, Danish, Icelandic and/or Norwegian a cappella group with which I am even remotely familiar is The Real Group, so maybe there are dozens of groups like baSix just waiting to be discovered in that part of the world. But if so, I might have to consider moving there.

With their first full-length release, entitled The Grass (as in "...is always greener", not the "medicinal" variety), the six men of baSix make an impressive statement as they join the upper ranks of pop-oriented a cappella groups. Wisely choosing a mix of covers and originals, they have fashioned a CD which combines a fantastically crisp sound (think The King's Singers, but hipper) with complex harmonies and a beautiful blend to always entertain and occasionally "wow" its listeners.

To be fair, the covers outshine the originals here — in particular the two tracks of which I was most leery when I saw the track listing. In tackling I Can't Make You Love Me and Smooth Operator, these guys were taking on two pure-voiced icons in Bonnie Raitt and Sade. Not the sort of tunes I'd usually expect from an all-male group, and to be honest, I was skeptical, or even cynical. Silly me. These turned out to be my personal faves on the album. Both arrangements are true to the original material while mixing in enough of the new and interesting to hold my attention, and both find ways to replicate the feel and style of the source material with imaginative syllables, chords and rhythms. The other covers were equally well-rendered, perfectly satisfactory renditions of somewhat more vanilla-flavored songs, such as Mariah Carey's Dreamlover (a slightly too mellow opening track) and You Can't Hurry Love, but suffered a bit in comparison to the two songs cited above.

As for the originals, let me just say that American lyricists — for a cappella or instrumental music — could take a lesson from these Danes, for they offer up literate lyrics which are not only polysyllabic but also have something meaningful to say (this is the first time I think I've ever seen the words "flagellant" and "cockatoo" in lyrics of any kind). On the down side, the melodies and arrangements, again capably performed, aren't quite as ear-grabbing as one might hope. A possible exception is Going My Way, with its Take 6 feel complete with jazzy slides and occasionally scatty background. Weathered Storm also distinguishes itself as more of a tone poem than an actual song — different, if not entirely compelling.

In all, these guys have made a helluva debut. Sure, their English comes off as stilted in a few places (and I believe grammatically incorrect in the case of the song entitled It Will Take Me All Life). Yes, their percussion is a little one-dimensional, relying mainly on a fist-on-chest backbeat plus snaps and claps. OK, so their solos are a little too "pure" (i.e., lacking in grit) sometimes. But cut them a little slack and buy the album. For non-native English speakers, the English is damn good. Their fist-on-chest kick drum is better than many of the vocal kick drums I've heard, and it proves to be damn effective (think the drum tracks often used by The Nylons). And overly pure solos should be the worst problem every group has to deal with. Do yourself a favor and pick up this album to get in early on a group from which we'll all hopefully be hearing a lot in the years to come.

baSix' new CD The Grass has the slightly surreal quality of a Mentos commercial, but the same charming appeal. Six cute Danish guys, wailing tenors, and rock-solid fundamentals add up to a winner of a pro disc.

My only critiques are related to repertoire. Now, I'm the first to admit that my Danish is not what it could be, but American pop demands a particular relaxed rhythm in order to sound plausible to English speakers. When baSix nails it, the result is natural, convincing English (Dreamlover). The less native-sounding English sometimes comes across as square (Can't Hurry Love) or incongruous (Englishman in New York).

The original songs, while skillful overall, occasionally fall victim to cheesy a cappella imagery. A bit more subtlety in the lyrics is all that's needed. And a few of the arrangements (How Sweet It Is) are rather prosaic and do little to show off the group's talents.

None of these flaws detract much from baSix' flawlessly rendered pop. My favorite track was the infectious Hepsi Senin Mi, an East-meets-West pop cover originally by Turkish diva Sezen Aksu. In fairness, I should state that for all I know, Niels Nørgaard's Turkish on this track might sound like Urdu to your Turkish friends, but it's a damn good song.

My request for the next CD? Some songs in Danish. I guess ABBA had to sing in English to make it on the Billboard charts, but let's face it, a cappella is going to reach a niche audience anyway. After hearing how well these guys do in my language, I can only imagine how great they'd be when they feel truly at home.

Available from Mainely A Cappella.