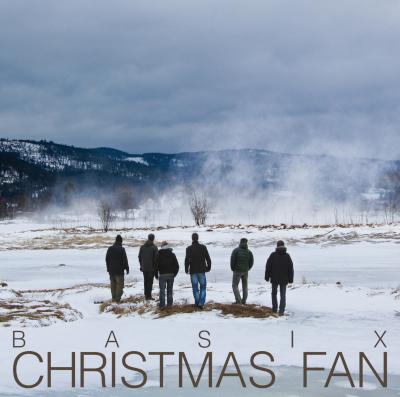 Everything about this album is pleasing. Nothing is displeasing. A lot of it is original. A little of it sounds like overtly Christmas music. One of the songs has a very familiar chorus, like a James Taylor or David Wilcox tune that I can't quite remember.

As a whole, the record is quite poppy, a little jazzy and excellently produced. And ... that's a lot of what I can tell you about Christmas fan from Basix. Oh, also a bunch of it is in Danish. It's possible it would sound more overtly Christmas-y to me if I knew more Danish. But honestly, I don't feel like that makes a massive difference. I like the sound of Danish and I think Danes are generally cute and a lot of fun, so for me the being-in-Danish thing is a net plus. The music overall is sort of generically western, in the U.S. and European sense of the word. It's good-looking and popular, but maybe a little too bland.

Should you buy this record? See if you can grab a sample track first. If you like that, I bet you'll like the rest of it, too. These singers really are talented, and it's great that they write their own songs. I'd much rather listen to somebody's original accessible-pop album than something full of widely available covers. This is a nice group of songs and I'm happy I heard it.

With its second Christmas album Christmas fan, Basix went the bright and sparkly route with a strong pop sensibility. It's pretty captivating and for the non-classical types, everything you'd want in a holiday album. If you haven't heard a lot from these guys (and why haven't you?), then this is a great primer to their style of a cappella. It's bubbly, theatrical, and possibly the most fun you can have listening to a bunch of guys having the time of their lives singing.

Even before reading the liner notes, I thought Christmas fan was a pretty fetching song. Anders Ørsager's lyrics and musical choices are squarely in Basix's wheelhouse: frenetic with dance club energy — like a mix of Sia, Beyonce, and Daft Punk. And then I read the lyrics and got the second and third meaning of the phrases. And I was so moved because it struck so close to home as a holiday reality for so many people. Can one dance and cry at the same time?

And then there is Fordi, which is magic floating along on a whisper. It's this album's version of River off of the Christmastime album. And it gets to me as much as what is probably my second favorite track of theirs, Cry out for muses. So while Fordi makes a valiant attempt, since I can't understand a dang thing they are saying, it won't replace either bits of perfection.

There are only two songs that I have some trouble fully appreciating. Nu hvor det bli'r jul and Santa's vacation. One is for an annoying background sound and the other is for inane lyrics that tire after the third listen. The pad in Nu hvor det bli'r jul features a strident "hu/hoo" in the upper voices that is consistent throughout the song. So it's a definite choice and not simply a one-off mistake because they use the same syllable in Hvis du farer vild where it is buttery goodness. I can't call it an intonation problem because it's a unified sound with impeccable blend, even matching the more pleasing baritone support. But it grates on my nerves severely.

Santa's vacation is just that: a song about Santa not coming to town this Christmas Eve because he's vacationing in Cuba (the nerve). It's funny with very topical references the first few listens and is purposefully tongue-in-cheek — a song for all of us adult kids. It has a catchy Caribbean rhythm and some crunchy jazz chords, but it all wears a bit thin quickly.

While Christmas fan still doesn't make me a fan of the holiday, it does make a few smiles cross these crotchety lips. Get it and enjoy many of the tracks year-round.

I first ran across Basix through the RARB review of their 2007 album Star People. The reviewers gushed about the album, so I purchased it. While I liked many things on that album, my own feelings were much more subdued. I felt like perhaps I was missing something, or that I wasn't the intended audience. Fast forward to Christmas fan, the group's latest album. I feel much the same. There are many things on the album that I like, but I'm guessing that other listeners might enjoy the album much more than I do.

For those who don't know Basix, they are a six-member all-male group from Denmark. Four of the songs on Christmas fan are in Danish, the other six are in English. Their English is extremely good, with just a slight accent — enough to be interesting but not enough to be distracting. The only English complaint I have is in Winter solstice, where the group sings "with Christmas come brighter days" instead of "comes brighter days". The quality of singing is very high; these voices sound good, very polished, and with a bit of a jazz and sometimes a folk-feel. The baritone typically carries the melody, with a single bass below, a duet part and two harmony-parts above, and gentle drum kit-style vocal percussion. Of the ten tracks on this album, eight are original compositions (all but the two easily identifiable English standards). I thought it was interesting that of those eight originals, five feature the composer as the lead singer. The soloists are all very good, but none really wow me.

The three songs that stand-out in terms of arranging are a jazzy version of Mary's boy child, parts of Santa's vacation that feature a Caribbean style, and Fordi. Fordi is by far my favorite song on the album, and definitely one worth listening to. Soloist Anders Ørsager, also the writer and arranger, imparts a breathy feel to his passages. There is a periodic echoing part, also breathy, which might literally be a digital echo of the solo. Those combine with harmonies on alternating high-low quarter notes and additional swelling high parts to give the song an ethereal layered quality that reminds me of songs on Postyr Project's eponymous album. Dynamic contrast, missing for most of the album, is achieved by bringing parts into and out of the mix.

If more songs were able to achieve the overall musicality of Fordi, I would gush as much as the Star People reviewers. As it is, however, I can't give Christmas fan my unequivocal endorsement. I call it good, but not great.

This album is available on iTunes and from the group's online store.