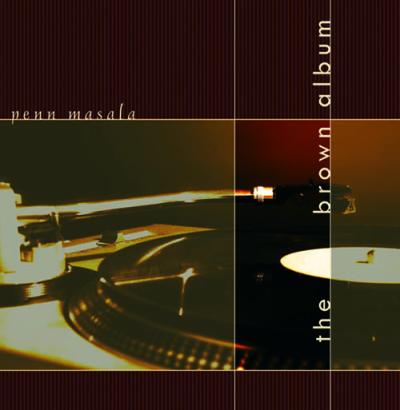 Penn Masala's latest CD, The Brown Album, leaves me once again frustrated at what could have been. As the most celebrated Hindi a cappella group at collegiate level, Masala has a unique sound and premise that helps them stand out from the legions of pop imitators. But ultimately, I was again left with the sense that their potential was hampered by not sweating the "small stuff" that actually looms big in the overall quality of an album.

There are some things to celebrate here. I found The Brown Album's soloists to be largely competent and more engaging than in the past. As with their previous album Soundcheck, the Hindi tracks tend to be a bit stronger than the melded ones. However, I did notice the average level of the Western pop songs was quite a bit stronger this time around. Given the pop songs on Soundcheck were far better than 11pm, we should be encouraged that Masala is riding an upwards trend. The effects on the lead of Walking Away neatly captured Craig David's digitized original, and there were several other nice touches of group whistling, shouts, and even a tolerable live rap segment. Best of all, much of the recording has an energy and vitality that I found lacking in some of Masala's earlier work.

Masala's Achilles heel is a simple but devastating one — the tracks are awfully tuned. Nearly every song had a major (if often somewhat hidden) tuning issue within the first few measures, leaving me banging my head against my stereo in frustration. Ankhon Mein Tu Hai, Tere Bin, Four Seasons, Main Hoon Na — we are talking consistent issues that permeate almost every track. Given that some tracks seemed to resolve themselves to some degree as the song progressed, I was left baffled as to how a group that sounds capable of far cleaner work would settle for so much less.

I must also return to an earlier issue I've had with Masala's work - too many of their tracks still feel a lot like disjointed songs brought together over the same chords as opposed to being an integrated performance. A lot of this stems from their habit of placing two minutes of a Hindi song in front of two minutes of a Western pop song; the most egregious example was I'll Be There, which felt completely out of place after the Hindi that preceded it. It works sometimes (Turn Me On had a fairly seamless transition), but sometimes doesn't carry an entire album. Instead, what if we saw more full pop covers with Indian elements built in throughout the arrangement, much the way that early Off the Beat "alternified" so many pop ditties? Sting already did this world musicizing-work for the group on Desert Rose, but its relative strength compared to some of the other pop on this disc suggests more possibilities exist with this approach.

So let's all hope Masala keeps fighting the good fight. Because yet again, a Masala album leaves me dreaming of possibilities rather than listening to perfection — and I'm just not ready to settle for it.

The radio-tuning effect inefficiently demonstrated at the beginning of The Brown Album is a perfect analogy of the entire album. Penn Masala is an all-male South Asian a cappella group out of Philly. Wibijazz'n' may not have been the first, but they did the radio thing better (on their 2003 release In the Pocket), and certainly with better tuning. While I liked the last Masala album I reviewed, I'm afraid this one barely hits the mark of average with too many altogether uncomfortable, piece-y arrangements and only slightly better tuning.

I face a lot of contradiction here going against what I wrote in my last review. The better tracks appearing here are the ones that are strictly Asian. For example, Desert Rose is a snore-fest that sounds just about like every other arrangement you've heard before and I only like the parts of Saade Dil Te/Turn Me On that are in Punjabi. There are a lot of fantastic songs and sections of tracks that I like, but of which I have no clue what they're about: the pulsing bass line of Maa Tujhe Salaam contrasted with the skillful tenor solo and the expert beatboxing and silky refrain of Aankhon Mein Tu Hai, to name a few.

Yet for all of the unusual musical mixing, it rarely results in the "wow" effect I think Masala was aiming for when developing the album. The chemistry of production and vocal execution, however, creates an unsettling, incomplete bubbling concoction that never quite reconciles into a new form of music; like oil and water, there is always the distinct separation of the Asian-influenced sections and the more Western segments. Dil Kya Kare/Ain't No Sunshine comes close to achieving this goal but the song weakly ends without reaching resolution. Arrangements aside, I'm pleased with the solos and especially with the overall execution of Wedding Qawwali despite my overarching loathing of Bombay Dreams, from which the piece is derived.

The a cappella rebellion aside, Penn Masala is no longer counterculture and have certainly established themselves as a serious collegiate force touring as far from Philly as Los Angeles and India. Despite their high-reaching accolades, the album itself is consistently unremarkable. Overall, The Brown Album is an uncompelling listen. With this CD I actually feel like I'm switching back and forth between radio dials. I'll take back my remarks from my last review and ask this time for a more committed blending of musical cultures that should hopefully achieve an altogether more unique genre.

In the liner notes to The Brown Album, Penn Masala declares their intent to present a combination of "South Asian music with a Western musical style". It's an ambitious claim, and fraught with potential, but sadly it's something that this group never successfully realizes. At best, this amalgamation results in some nicely textured voicings on tracks like One and Ain't No Sunshine, bringing interesting twists to those familiar "Western" tunes. However, more often the group falls prey to some of the inherent dangers of fusion, and combined with some very sloppy technical work, the result is a truly disappointing album.

The most obvious difficulty in combining songs from two distinct genres into one track is the possibility that the chosen songs don't actually go together. One/Chalte Chalte is the biggest offender here. There is no apparent musical compatibility between the two songs, which the arranger chooses to link together by way of a clumsy bridge. Furthermore, the aforementioned voicings on One disappear in Chalte Chalte, which has the confusing effect of making the South Asian tune sound more Western than the one by the most ubiquitous Western band out there. It begs the question: why even bother combining these two songs in the first place? Saade Dil Te/Turn Me On provides a similar conundrum. This track kicks off with Saade Dil Te, which actually seems like a fun, interesting song, but transitions into the uber-repetitive Turn Me On so quickly that the former tune serves as little more than an intro to just another flaccid approximation of an overplayed hip-hop hit.

On the other end of the spectrum, Penn Masala's blending of Eastern and Western musics can become more of a blanding, so to speak. Somewhere in the translation, the special characteristics of both genres get lost, and what's left is a smear of indistinguishable tracks: mid-tempo songs in minor tonalities, with an overarching sound best described as "boy-bandish". Not surprisingly, then, the handful of unadulterated Hindi tracks provide the album's best music. Maa Tujhe Salaam, Wedding Qawwali and Nahin Samne showcase the group at their finest, with arrangements that ebb and flow nicely through some beautiful harmonies and complex rhythms.

Even without such problematic programming issues, Penn Masala fails to deliver in many fundamental technical categories. Tuning and intonation throughout are incredibly lazy, and quite often the background vocalists sound as if they're bored with the material. I wonder if the group was aiming for the sort of plaintive sound indigenous to many South Asian instruments, as many of the arrangements include lengthy drones, but whatever the intention, the end result fell flat, and caused me to cringe no small number of times. Fortunately, almost every soloist on the album brings energy and emotion to his song, even when crooning over some very uninspired backgrounds. Rishabh Jain is a true standout for his work on Nahin Samne.

To boil it down, what ultimately plagues The Brown Album is the lack of a true focus. This has obvious repercussions on the group's musicality, but is much more destructive on a programmatic level. If Penn Masala wants to achieve fusion that doesn't seem either forced or hackneyed, they first need to develop a mastery of each of the separate genres they hope to bring together, and then work in from the outside. If the Hindi tracks on this album are any indication, then they're just about halfway there.