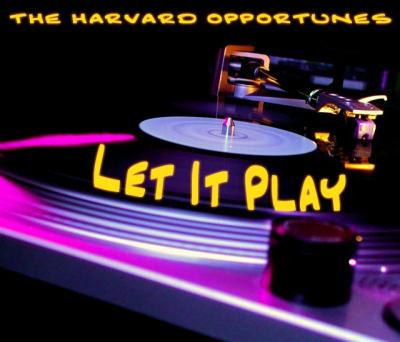 The Opportunes sound so dewy and youthful on Let it Play. Hard work and earnest good intentions produce a nice record that falls squarely in the middle of today's a cappella pack.

What good times we live in, that a record with fundamentals this strong can be considered average. The Opportunes have sweet voices, and they took the time to record in tune and together. What this album lacks is depth — of soloists, of context and of artistry. The Michael Jackson Medley is one example of how this plays out. Its song snippets are seemingly spliced together, without any thought for how they play in a medley or why they belong in a collage to begin with. A group can play down this type of separation in a live environment, with some physical comedy to show a record skipping or a radio station changing. On a recording, the listener shouldn't have to fill in the gaps.

As if one medley weren't enough, the Opportunes also subject us to eight minutes and fifty seconds of Let the Music Play. Parts of it hang together quite nicely, like the Tipsy overlay and some of the title track segments. Other parts of it are good and may have deserved their own track, like the minute or so of She Will Be Loved that sounds better than anything else on the entire album. But large chunks of this medley sounded disconnected and self-indulgent. The history books (True Story) show that this type of grab bag seems to be an Opportunes tradition. I think it needs some work.

I Want You is the only song on this record that spoke to me. It's good material, well delivered, and spritely. Other songs fall short, in one way or another. Powerless is mumbled, Signed, Sealed, Delivered is flat, and Think is competent yet underpowered. Drift Away is just kind of there. And the Opportunes should have taken Shenandoah into the studio. The live version here is pretty, soulful and woefully out of tune. This group, and this song, deserve better.

Songs I would normally like — the vocal-centric, the spiritual-esque — lose luster from too much uncontrolled melisma and too little research. I Wish I Knew How It Would Feel to Be Free isn't some traditional ditty that just popped up in a Coke commercial. It's a composition by jazz great Billy Taylor. Google tells me that Dick Dallas wrote the lyrics. Couldn't it have told the Opportunes the same thing? Likewise, Change in my Life was written by Billy Straus, which means it's not "traditional" no matter how traditional our a cappella community has made it. (And although the Opportunes sound nice on this song, they don't meet the high cover bar set by the Duke Pitchforks and baritone Bill Martin in days of yore. Ah, my heart.)

The Opportunes should be proud to sell this CD to the general public — fans, school kids, and the casual listener. But good intentions and good fundamentals notwithstanding, a cappella junkies will want to look elsewhere.

Typically average albums are the toughest for me to review. They usually have nothing that stands out particularly good or bad, and it can be difficult to adequately describe that to the reader. However, with Let it Play — the most recent release from the co-ed Harvard Opportunes — I have the opposite problem. Instead of everything being mediocre, there are elements of greatness and other elements that detract from the album's quality. The end result is a release that averages out to about, well, average.

One thing the Opportunes consistently display is energy and enthusiasm. This album never gets boring, and it's apparent the singers are having a fun time. Really, that's what a cappella is all about. Often, collegiate groups get into the studio and get either too scared or too serious, but the Opportunes have a fun, fresh sound others should seek to emulate.

Production is also of extremely high quality but, unfortunately, not at all to my taste. The Opportunes seem to follow the reverse pyramid mixing method, where the higher you get in the vocal spectrum the more prominently featured the part is. I can barely hear the bass and the men often seem non-existent. Lower women's parts are there but weaker in the texture. High women's parts are right at the forefront of the sound. This blend just didn't work for me, and I felt Let it Play lacked background texture. Instead, the album is driven by solo and percussion with bits and pieces of backing flair. Further even above and beyond the top-heavy blend, everything seems consciously brightened. The result is an extremely sparkly and punchy sound that feels a little too gimmicky for me to listen to for an entire album.

The Opportunes need the most work on the quality of their soloists. Leslie Barkett gives a nuanced and seemingly effortless performance on I Wish I Knew How It Would Feel to Be Free and Michael Goonan is decent on Change in my Life, but almost everyone else brings the quality of the album down. Perhaps there is a little too much energy, as the soloists just seem like they are trying too hard. The men can't seem to fully master their songs and tend towards sounding petulant. The women are consistently and annoyingly nasal; the worst offender is Ashley Fochtman who is so piercing that I typically can't make it through Powerless without getting a headache.

The choice to end the album with a live version of Shenandoah was a huge mistake. It simply can't match the quality of the other songs. It's unfocused, out-of-tune, has a terrible soloist, and left me with a very poor taste in my mouth.

The Opportunes love their medleys, and a look at the song Let it Play will illustrate the opposing forces of good and bad at play on this album. Let it Play is a whopper, coming in at eight minutes and fifty-two seconds. It changes constantly, and I counted no less than 18 songs featured; there is no discernible theme or criteria for inclusion. Transitions occur rapidly, haphazardly, and are confusing. For example, the song opens with Evanescence's My Immortal, which abruptly turned into Hollaback Girl and then into Let the Music Play. The listener just gets lost. Yet despite the only brief glances we get of each song, they are exquisite. Shake that Thing, Toxic, and especially Milkshake feature top-notch performances, arrangements and production and could have made excellent tracks on their own. It was very frustrating to see such excellence wasted in snippets.

I think the Opportunes have the energy and potentially the talent to make a top-notch album, but they haven't quite figured out how to get there yet. With some more focus, more solo coaching and smarter choices, I look forward to what the Opportunes can do in the future.

Pretty, but not powerful. That's the best way I can think of to describe Let it Play, the latest release from the Harvard Opportunes. The ‘Tunes vocals are polished but lack maturity, emotion, and depth. The songs are nice but lack flair. It's cute fun, and a lot of things are good. A handful of moments even show promise of something great. Sadly, cute just don't cut it, and this album comes up short.

The biggest culprit here is lackluster singing. It's not that anyone sounds particularly bad (although soloists are so-so across the board), they just don't sell the music well. It's the difference between watching a talented singer versus a seasoned performer. The talented singer sounds good, but he or she probably isn't going to give the performance the physical and emotional support it needs to get under your skin. The seasoned performer on the other hand knows how to do more than sing pretty notes. The ‘Tunes' notes are pretty, but they lack emotional heft.

Song selection is also hit and miss. Meaning was cool, and I won't begrudge the addition of a couple classics, even if they are a bit overdone (Signed, Sealed, Delivered, Change in my Life). But guys, we need to talk about your medley addiction. This album has two of them: one Michael Jackson Medley, and one eight minute and fifty second parade of just about every pop tune you've ever heard of. I'll let the MJ medley slide, but I would suggest leaving off something like Let the Music Play next time around. It's way too long, too random, and the songs don't fit together gracefully. I can see it working in a live show as a skit of sorts, but it should have been left on the stage.

However, as much as the song bugged me, I have to give kudos to whoever sang the She Will Be Loved snippet solo in the aforementioned marathon medley. He was really good. I wish you guys had opted for just that song with that soloist (unfortunately not credited in the liner notes).

A fair album overall, Let it Play has too many missteps for me to recommend it. A bright pop approach can be cool, but you have to back it up with some guts here and there to keep people interested. Here's hoping for a better showing from this group the next time around.