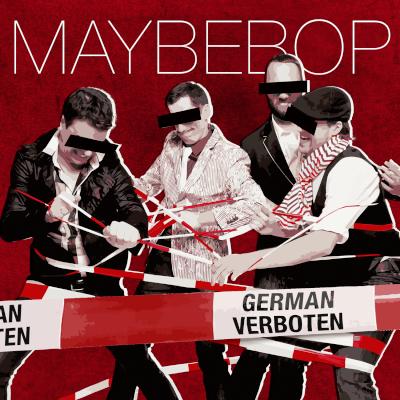 Maybebop is one of Germany's leading a cappella groups and one of its most prolific. And where most groups earn their bona fides as interpreters, imitating the hits of the day, Maybebop's albums overflow with originals. Funny, touching, quirky, and catchy. This album is no exception in that regard. Where the group turns a new corner is that almost every word is in English. No longer must non-German speakers rely on Google's inartful translations, and as a result, Maybebop's complete sound has never been more accessible.

American pop has an easily recognizable syntax, a type of lilt and lyric choice that's so ubiquitous that it becomes assumed scène à faire. Maybebop writes differently, more theatrically. Rock stars maintain some semblance of presenting listeners with an artistic image of themselves. Maybebop assumes the perspective of characters that are presumably wholly unlike the singers themselves. This is done not only lyrically but also timbrally and stylistically. This involves a tradeoff for most listeners: variation for authenticity.

It's a trade that pays big dividends as this is probably the most varied and original release in a cappella this year. Borrowing from dance, pop, metal, classical, swing, rock, easy listening, and beyond, the group somehow maintains a cohesive world that remains uniquely Maybebop's. Perhaps that's due to the fact that storytelling takes priority. And the stories are far from your average fare: not putting out on the first date; a Gothic, nearly vampiric view of life from the perspective of a fetus reluctant to leave the womb; Kraut-pleasers, a punny collection of the most well-known German words and expressions set to a dance beat; the lifelong desire to stop being so nice and just drive a tank; the existentialist dilemma of forever running into doppelgängers.

German Verboten is an album that should appeal greatly to fans of the Bobs, especially those that have always longed for shinier production values (and a more Germanic accent). All the quirk is intact, but where the Bobs went for a rough and tumble organic sound, Maybebop presents a more airbrushed perfection that embraces the fullest range of studio effects, often achieving sounds that barely resemble the human voice, but also demonstrating phrasing and blend of the highest order.

Maybebop's last two albums, Endlich authentisch and Extrem nah dran were my RARB "Picks of the Year" for 2009 and 2011, respectively. Will German Verboten be my Pick of the Year for 2013? Based on my straight 5 ratings in all categories it seems quite possible. This is a fantastic album.

German Verboten is a compilation album, taking some of Maybebop's favorites from previous albums and re-recording them in English (mostly). Since nine of the thirteen tracks come from the aforementioned two Picks of the Year albums, I suspected I would love this release. And I do. Because I appreciate information like this myself, here's a list of the German songs from previous albums that these English songs correspond to:

Some of these are cheating a bit ... as far as I can tell, Air is exactly the same as the version from Extrem nah dran; Kacktus is a new version but still in German; and I suspect Smells Like Teen Spirit is the same as the one on Wie neu, but since I don't have that album I'm not 100% sure. (Wie neu is very similar in concept to this album, but with the re-recorded songs in German instead of English.)

As I expected, the quality of the recordings is very good, both in terms of musicality and production quality; however, when I listen to a German original back-to-back with one of these English reissues, the English ones seem a bit harsher for some reason. Their English translations are generally quite good, although sometimes the lyrical cadence doesn't quite work. They also sing the English with much less of an accent than I have sometimes noticed on their English songs on previous albums.

All in all, this should make Maybebop's wonderful music and witty lyrics much more accessible to the typical English-speaking RARB reader. (Please see my reviews for Endlich authentisch and Extrem nah dran for further descriptions of what Maybebop's music and lyrics are like beyond just "wonderful" and "witty".) At the close of my review of Endlich authentisch, I wrote, "I sincerely feel that this album should be required listening for all new collegiate a cappella group members, to show what is possible within the genre." Others beyond collegiate groups will also certainly benefit from the Maybebop experience. If you didn't follow my advice then, then you should certainly follow it now: this album is a must-have.

Oliver Gies, Maybebop's baritone, deserves a thunderous round of applause for his work on the superb German Verboten. The lion's share of songs on the album are originals with music and lyrics by Gies, and every single arrangement is credited to him as well. The songs are an interesting bunch: some funny, some sad, but they are always interesting and expertly performed.

Maybebop is a personal favorite of mine, and I've been privileged enough to review a previous release of theirs, the candy-coated Extrem nah dran. In the review, I bemoaned that my childish level of German comprehension prevented me from getting the full experience. Well, my prayers have been answered: as the title suggests, German Verboten is (mostly) in English! Like their jazzy colleagues in Sweden, The Real Group, Maybebop seems very comfortable with the language. In fact, the mix of silly and sweet songs on German Verboten calls to mind The Real Group's landmark album In the Middle of Life.

In my review of Extrem nah dran, I felt that Maybebop lacked direction. The vocalists sounded so good on the album, but they veered all over the genre map and it became increasingly difficult to pin them down tonally. This is definitely remedied on German Verboten, which is as cohesive an album as I've heard from Maybebop. Even the stranger songs (The bizarre Silent Song, the rip-roaring Kacktus, and a surprisingly great electronic remake of Smells Like Teen Spirit) seem like part of an overarching whole. Maybebop definitely doesn't take itself too seriously, and the mixture of electronic dance music and classic four-part a cappella works wonders with these four charming Euro gentlemen at the helm.

German Verboten is the best album Maybebop has ever released: silly, solid, and incredibly endearing. Maybebop may very well be Germany's top a cappella group at the moment, and if they can maintain the atmospheric highs of German Verboten, they could very well go down in history as one of the greatest vocal groups in the world.