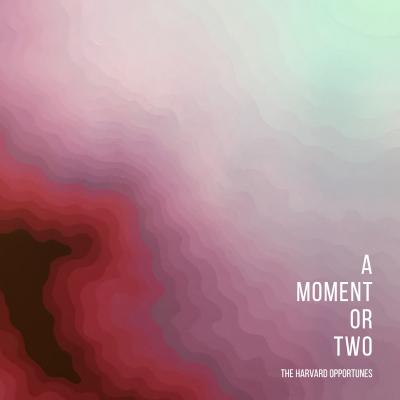 A Moment Or Two is a big-tent album, charming and accessible to just about anyone with a shred of affinity for pop music. Much of it feels like hanging out at a quality piano bar: Stevie Wonder and Michael Bublé covers, ably performed, and good songs interpreted for good musicians to make sure you will have a good time.

Harvard's Opportunes bring talent, professionalism, and dedication to the whole recording. They also used top-caliber support staff: recording by Alexander Koutzoukis and former RARBer Alex Green, engineering by Ed Boyer, and mastering by Dave Sperandio. It all combines to a big achievement. This album sounds good now, and I expect it will sound good in ten years and probably thereafter.

Widespread appeal is a hard thing to pin down in a review, which specializes in details and specialist attraction. My favorite performance on the release is possibly Come Round Soon, which is probably because original artist Sara Bareilles is also a favorite of mine. I also especially like Eli Schleicher's arrangement on Searching For A Feeling, which takes The Opportunes out on a comfortable groove. My favorite solo comes from Isa Lapuerta on If I Go, followed closely by Maribelle Dickins on Sandcastles. Overall, I like the mix of percussion, no-drum choral moments, and handclapping across the album.

The arrangements took the most risk with the soprano lines and generally won those bets. I feel that Cameo Lover isn't quite as polished with its high notes as the rest of the album, but that doesn't take away from the song's general success with a swingy showtune vibe. Likewise, Heavenly Father is perhaps the least memorable song on the release, but I don't think that's any fault of the performance.

Do you like pop a cappella music? You'll like A Moment Or Two. You may fall in love or you may be gently entertained, but in no case will you walk away disappointed.

It's fairly easy to claim that many a cappella groups have an abundance of diverse music capabilities, due in part to group size. But there's something to be said for groups who consistently and incredibly display this diversity, through a well-developed and unified sound. So much of this is presented on A Moment Or Two by The Harvard Opportunes, and the end result is absolutely worth investing your listening time.

Consistency may be the underlying theme as to why A Moment Or Two works.

For starters, each track is exemplary in terms of production. Nearly every vocal line rings out in delightful fashion. Whether it's through the animated stylings featured on If I Go or the arresting and serene collective singing on Heavenly Father, the listener is treated to every inch of The Opportunes' sound. There's no denying an effortless listening experience, and you are treated to just that with this album.

What also remains consistent for the majority of the album is the cohesion in the rhythm section. Both bass and percussion are an absolute machine in steadily delivering support to so many great tracks including FEEL YOU, My Mind and Come Round Soon to name a few. The groove that these two help build and maintain caused me on multiple occasions to simply lose it!

As you make your way through A Moment Or Two, you notice that The Opportunes have an almost endless supply of gears they can switch between. If I Go showcases how the group is so skillful when its playing with rhythm, as the singers push the limits with tempo, all while successfully matching the ever-building intensity of the phenomenal soloist. Heavenly Father is a stunning tear-jerker, which is rich with balance and delicacy in execution from each part. It's rare that an arrangement such as this one, which is full of emotional and dynamic ebbs and flows, is simultaneously successfully executed and evokes a strong emotion in the listener, but this song does just that.

And along the way, The Opportunes manage to pull off a gutsy and breathtaking delivery of My Mind. Each turn of the song is a surprise, as it is dark without sounding overly heavy, unrestrained in its passion, and features one of the most captivating soloists I've ever heard from the a cappella community. Sandcastles deserves similar adulation as each vocal line truly takes on a life of its own, reinforcing the brilliant delivery of the song's lead. Each track on A Moment Or Two offers a bit of variety, whether it be through demonstrating the group's ability or just a knack for arranging.

The minor flaws with the album lie in an occasional imbalance between soloists and the fact that the less popular songs have more staying power than the more well-known ones. But all things considered, the Opportunes have given us an impressive assortment of music that sounds and feels sensational!

A Moment Or Two is a peculiar mix of old and new, an album that simultaneously feels like it released this year and fifteen years ago. There are trappings to its musicality and arrangement choices that keep the group from reaching its potential, but that doesn't stop the album from being great and having some outstanding songs along the way.

When I say "old and new", I don't strictly mean the age of the songs chosen, although there is a healthy amount of variety there. The biggest weakness I can point to in A Moment Or Two is the dated nature of a lot of its arrangement choices. Modern a cappella has moved away from syllable-heavy background parts directly trying to imitate instruments as the standard, but The Opportunes still dabble in that style frequently. It's not inherently bad, but used improperly it can be distracting. Sometimes it can lead to very busy backgrounds that drown out soloists. A good example is Sandcastles, carried by a breathtaking solo by Maribelle Dickins but held back by an arrangement that overpowers the lyric during its most gentle and tender moments. Cameo Lover and Haven't Met You Yet have similar issues, where the high level of noise distracts from the arcs of the songs.

There are also some situations where busyness in background parts inhibits dynamics or holds back a song from making a lasting impact. FEEL YOU and Come Round Soon have incredibly solid groundworks as songs, but both emphasize more heavily on rhythmic parts at the expense of actually driving power and volume during the moments that should be most intense. As a result, instead of feeling intense, they instead feel scattered even while the solos are at full power. The songs end up feeling more like filler rather than "bangers" (which is especially costly for the opener FEEL YOU, which is by nature required to make a splash).

All that being said, The Harvard Opportunes definitely have a ton of strengths despite these issues. Even with busy moments in arrangements, the core sound of The Opportunes is superb — consistently full, warm, and engaged. Whenever background voices are pushed into interesting parts, range- or dynamics-wise, you can clearly hear that members are having fun with it. All of this is complemented by some sublime production work by Alex Green and Alexander Koutzoukis of Plaid Productions, Ed Boyer of Ed Boyer A Cappella, and Dave Sperandio of Vocal Mastering.

Solo work is also incredibly strong and clean, with hardly a single weak spot on the album. I already gave praise to Sandcastles' soloist Maribelle Dickins, but I could perhaps levy equal praise to the raw vulnerability of Jake Stone on Searching For A Feeling and Rachel Kahn on My Mind, as well as the style and smoothness of Chloe Saracco on Don't You Worry 'Bout A Thing. The best demonstration of solo work, however, might be on Heavenly Father, possibly my favorite song on here and one without any single soloist. Instead, it seems that every member of the group gets at least one go, and every new solo builds on the energy where the previous one left off. As a result, no one person leaves a distinct mark, but the group certainly does. It dissolves the concept of foreground and background sound and serves as a demonstration of pure group chemistry.

Finally, it should be noted that while Opportunes' arrangements generally fall on the busier side, the songs that don't are often strongest because there's less to distract from the group's virtues. In addition to Jake Stone, Lily Jacobs and Eli Schleicher's arranging work on Heavenly Father, My Mind (Eric Tarlin in addition to Stone) and Searching For A Feeling (Schleicher) also deserve shoutouts. My Mind takes the form of an album interlude: it's a great song on its own, but the first half is even better in the context of the album, providing a breather for the super upbeat previous two songs. Searching For A Feeling hits all the right beats for a finale song that I'm willing to forgive the occasional moment of excessive busyness.

It's these strengths that make me enjoy the album's highlights signficantly more on each subsequent listen-through of the whole thing. Every song that I give a '5' to on here will probably be in consideration for my favorite a cappella songs of the year.

I also need to give credit to very detailed liner notes for the album. It's important to credit songwriters, not just original performers, and The Opportunes thankfully do this.

The Harvard Opportunes carry some phenomenal talent and ensemble delivery on A Moment Or Two, only held back by frequently dated stylistic choices. Getting rid of this style is by no means a necessity, but reevaluating when it accentuates the group's ability, and when it hinders it, may become especially important moving forward.

A Moment Or Two streams on Spotify.