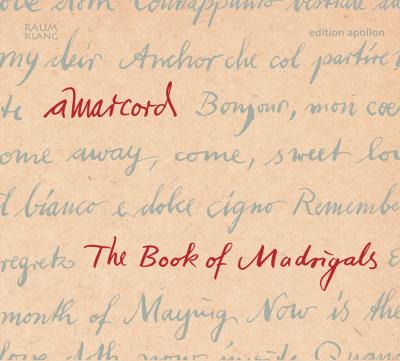 Ensemble Amarcord's talent meets its match in The Book of Madrigals and the verdict is stalemate. The singers bring their trademark musicianship and top-shelf intonation, but the frothy repertoire doesn't really suit their thick tone and cathedral-style reverb.

Now Is The Month Of Maying is a bracing start that sets the stage for coming pleasures and pitfalls. The backing parts are elegant and smooth-toned, particularly when heard through decent speakers. But the consonants are long and hissy, not light and crisp, and the countertenor lead has a disconcertingly heavy timbre. Part of this may be the group's accent when singing in English — I've heard enough German speakers wince at American choirs to know it's mutual — but I also think Amarcord isn't in top form on this album.

The disk gets easier on the ears as it progresses. In part, it's because the slower numbers are generally more successful, which is what you'd expect from a group that excels at sacred music. Also, ears adjust. The weird countertenor thing fades into the background after a few songs, as does the language barrier once the multilingual repertoire starts to skip around. It's easy to enjoy the good parts and make excuses for the others. And yet. When the group lightens up, the texture improves but the tuning gets just a tad shaky. Likewise, the faster tempos bring welcome energy but also a bit of smudge. Even the joke numbers are inconsistent. I loved the cackle in Vecchie Letrose (nasty old hags) but didn't really get into Contrappunto bestiale alla mente, a fluffy fugue of barnyard noise.

RARB readers should note that this is a classical group and a classical album. The standards of musicianship are higher — this is chamber music, presented without ProTools, in all its acoustic glory. And the members of Amarcord are all very accomplished classical singers. That's why I was disappointed that The Book of Madrigals wasn't more accessible. There's much to admire here, but it requires some effort from the listener. In contrast, the Christmas album Nun komm der Heiden Heiland was warm, catchy and irresistable, as well as musically flawless.

I'd like to hear more sacred music from Amarcord, perhaps some early masses or high Renaissance hymns. The Book of Madrigals may foretell that destiny in its last, and best, track, Das Gläut zu Speyr. Its subject? A call to prayer.

Amarcord's Book of Madrigals is more like a library, delivering a whopping 33 spectacular, 16th Century, secular Renaissance works! Fans of the genre will recognize composers such as Dowland, Morley, Senfl, Banchieri, and the "de"s: de Lasso, des Prez, and de Rore. And the award-winning German sextet's resonant tone and careful phrasing do much to endear these short compositions to a new generation.

Native English speakers will notice that Amarcord's fine singing is accompanied by a mild German accent. "Now is the Month Ahv Maying", "Come eh-way, Sweet Love". The accent is never so much that the words cannot be easily understood, but rarely is the English sung such that reminders of the ensemble's home country aren't present.

The production quality is clean and unaffected, with a natural reverb and light stereo separation. This is a recording which could very well sound as these works were imagined by their creators. Almost nothing in the current arsenal of studio effects mars the simplicity of the production or the purity of the voices. True, a few errant woofs and grunts in Contrappunto Bestiale Alla Mente seem to have overdriven the mic's diaphragm, but the moment passes quickly and no such problems affect the bestial noises of Ein Henlein Weiss or Cucú, cucú, cucucú.

Purists will enjoy excellent natural intonation, a rarity among RARB reviewed materials (although they may show disdain over the non-vocal percussion of Pastyme With Good Companye). Fans of the genre will adore Amarcord's consistently graceful phrasing. Fans of the Kings Singers and Chanticleer will applaud Amarcord's blend. And even those who may not count themselves fans of the Madrigal might just find that Amarcord's musicality has won them over.

I am a musical nerd. When I lived in Boston, I sang in a group that performed only secular madrigals from the Renaissance period. Thus you can imagine my excitement when I received The Book of Madrigals from Amarcord. Not only is this all-male sextet from Germany one of the better small vocal ensembles recording today, but also the album contains only "secular vocal music of the European Renaissance". Nice!

Amarcord did its homework, presenting thirty-three excellent examples of the madrigal tradition. The pieces come from across Europe and represent a variety of styles and moods. Amarcord continues their tradition of providing rich liner notes, allowing the listener to become even more familiar and involved with the music. Most importantly, Amarcord really gets what's at the heart of the madrigal: a sense of dance. Each track strongly articulates an appropriate dance rhythm which maintains excitement throughout this lengthy album.

While Amarcord got the concept right, the execution is occasionally — and uncharacteristically — sloppy. The album has its moments of true ensemble singing, but much of it doesn't click. Pitch is good, but blend could be better. In general, I get the sense Amarcord went to recording knowing the notes but not having mastered the musicality of each track. Inner voices, in particular, often feel sluggish and lack a sense of direction. This is highlighted by an often too-prominent high tenor. After my praise for their previous release Nun komm der Heiden Heiland, this turn for the worse is especially disheartening.

Despite these shortcomings, The Book of Madrigals remains an album worth listening too. Even at 80%, Amarcord is still better than most other groups out there. Especially enjoyable are the light-hearted English and Italian numbers. Madrigal writers were fond of humor and satire, and Amarcord highlights this in such numbers as Contrappunto bestial alla mente and Ein henlein weis. Rhythmic pieces, such as in Strike it up, Tabor, also shine. Overall, despite not being Amarcord's best release, The Book of Madrigals is a welcome addition to the classical canon and provides a great primer/survey of the Renaissance madrigal tradition.