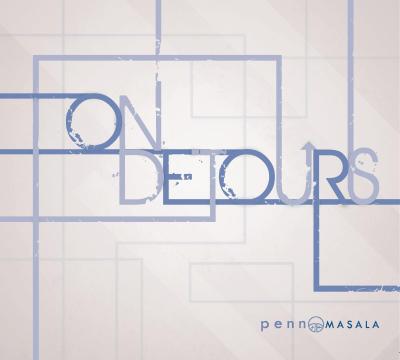 For quite some time now, Penn Masala has been the most celebrated, and at times perhaps the only, a cappella group performing Hindi repertoire on the collegiate level. And rightly so. The group's penchant for blending Western pop with Hindi-language material was a unique approach, and as it has grown as a group over the last decade or so, the quality of sound gradually improved to match the ingenuity of the gimmick.

The trouble with a gimmick, however, is that it often gets old.

Such was the nagging feeling I couldn't escape in listening to Masala's sixth CD, On Detours. Fully half of the tracks fall into the English/Hindi medley category. Perhaps I am expecting too much, but the mere fact that two songs share similar chord progressions is not reason enough to warrant a medley. Indeed, in listening to tracks like Because of You / Tu Hi Meri Shab Hai and Aadat / Apologize, rather than marveling at the craftiness of the arrangement I found myself musing that South Asian popular music has clearly become as bland and boring as most of Western popular music. I suspect this was not what Masala intended for me as a listener.

To be fair, a medley of two like-sounding songs might still be engaging if the arrangement of each song within the medley was compelling in its own right. Alas, Masala's arrangers seem to do virtually nothing to give each song its own artistic identity. Remember if you will when you sat at the piano and discovered that the C-Am-F-G background chords you played behind Earth Angel also provided able accompaniment to Journey's After All These Years, Bob Marley's How Many Times, and Led Zeppelin's D'yer Maker, and you have some insight into how I felt throughout much of On Detours. Yawn. Would that the group had at least clued me in to some sort of contextual or lyrical connection between the songs being fused but once again alas, no translation of the Hindi songs is provided — which proves especially frustrating on the original material.

Speaking of the original material — the covers, incidentally, are oddly credited as being "Inspired by" their source material — the group deserves some credit for giving it the old college try: three tries in fact, with two of the three tracks showing off able hook-writing skills by their composers. I imagine the wordless opening track Detours was intended to set the mood for the Hindi/Western fusion that is to follow. It does that, I suppose, albeit very straightforwardly and not terribly compellingly. Kal Ka Sapna is a bit better, offering what feels to me like a Hindi boy-band type track featuring power chords with an eighth-note rhythm layered on top and a slightly too show-tuney solo from Ankit Shah who otherwise is the album's standout soloist (Lovestoned, Because of You, What Goes Around, etc.). The closing track, Distant Places is probably the best of the original material, picking up from the fadeout of the opening track and expanding into English and Hindi versions. As is often the case for both collegiate and many pro groups, the English lyrics are predictably banal and the Hindi lyrics? Well, I can only hope they are a bit more interesting in translation.

At least to my knowledge, there really isn't anyone else regularly taking a musical Cuisinart to South Asian and Western music and for that alone, Masala is worthy of kudos. But what was once fresh and new is now old and tired so they're going to have to come up with more interesting and complex recipes if they would like me to continue partaking of their musical feast.

Penn Masala has been around the block a few times. The group has developed a style of mashing up current pop hits with Hindi music. This works and doesn't work all at the same time. I get the idea they are fusing together two cultures, and when they incorporate a Justin Timberlake song with a lesser-known Hindi song it helps to pull in their prospective college audience and keep it interested. This works, but at the same time it shortchanges the Hindi artists they are trying to slip into the song ever-so-conspicuously. I would rather hear these songs in their entirety, whether they are American pop or Hindi pop. Instead of bringing the listener to the edge of the pool and asking them to dip their toes in, why not just push them in?

Opening track Detours is instrumental and hypnotic, but doesn't really progress anywhere musically. I do enjoy the fact that it is originally composed by Ankit Dhir, Chethan Mudiyam, and Nikhil Marathe, but it doesn't exactly open the album with a bang. Maybe Penn Masala could explore the idea of composing short songs that link the dead space between songs. Given the style of the music, this technique would allow the songs to move freely between each other and give a never-ending feel to the album, which would be a nice nuance for this group.

Production is slick and smooth. The vp is churning in the background like a slowly moving locomotive, which allows the singers to ride above safely without feeling too many bumps along the way. The mix of soloist to vp to backing singers is balanced well, allowing the listener to hear everything clearly.

Arrangements are pedestrian at best, especially for the fourteen singers pictured in the group shot. I suppose the thin, bright and shiny sound is appropriate for the pop music they're covering (e.g., Cable Car, Chris Brown, and Justin Timberlake), but I'd hope for more creativity in the block. Simple bass lines, upper voices that consist more often than not of "ahh", and an occasional instrumental line and that's about it. Across an entire album, the arranging style grows tired.

Yeh Honsla is a good example of a Hindi song standing up on its own. Performing the entire song allows Bharat Moudgil and Chethan Mudiyam to convey the entire scope of the song's emotional landscape through the verse-chorus-bridge concept.

On Detours closes out the album with a gem of an original called Distant Places. It is interesting to note that this track has more layered complexity and a much better overall arc to the song writing than the pop hits they're covering throughout most of the album. I would be enthusiastically on board if the next Penn Masala album consisted of mostly originals and Hindi pop. Until then, this album is mostly average with not a whole lot new for the listener to hold onto.

It's official: Masala from the University of Pennsylvania absolutely dominates the Hindi/South Asian-American fusion a cappella market.

Well, okay, even if that were a well-established market with many players, Masala would likely rise to the top. The all-male group generally provides seamless mixes of Hindi and Western pop music, with fully realized arrangements and heartfelt performances. Seldom do I feel compelled to give top ratings for "Innovation/Creativity", but the careful construction of these blended pieces, along with several original compositions, definitely warrants recognition.

The album opens with Detours, a short group piece penned by a few of the members. It sounds nice, but it's largely uninteresting for the duration of track. The main theme of this song is reprised at the start of the final track, also an original piece, which ties the bookends together. Neither of these tracks is mind-blowing, but they're solid efforts and fit in well with the rest of the pop songs sprinkled throughout the album.

The other tracks are also nicely conceived. Most songs are hybrids of Hindi songs and recent American pop hits. The two elements flow in and out seamlessly; they never seem like mere medleys with a common chord progression. Rather, they are fully inspired original pieces that carefully infuse elements from both songs. Again, the arranging on this album must be commended, especially because it seems that many different members of the group are contributing.

Masala writes nice music, but that's only half the battle. Fortunately for everyone, they also know how to sing, both up front and in the block. The front men are invariably masterful, and can provide both smooth and sexy stylings and sound traditional Hindi vocalizing. The block is energetic, lively, and well blended and tuned — although there's clearly a fair amount of help from The Machine. Still, only rarely does the production overwhelm the performance — in fact, the production techniques are nicely balanced in general. These talents shine brightest on Aadat / Apologize. The soloists (Ankit Shah, Chethan Mudiyam) will make you melt; their energy is tangible. I transferred that one to my iPod.

The only thing that prevented me from awarding a "5" is the simple fact that much of the album failed to keep my attention. Masala has done about as much as possible to make the music of another culture interesting, but in the end, Hindi music isn't necessarily in the set of most RARB readers' musical interests. This album is one that can be appreciated for its artistic value, but not necessarily one that you can't wait to listen to every day.

Still, I'd recommend purchasing On Detours. It offers a refreshing sound and is a nice reminder of the rich diversity that collegiate a cappella can offer. Not only does Masala consistently put forth quality singing and writing, but it also bridges a gap between two cultures through the universal language of music. And that's definitely worth supporting.