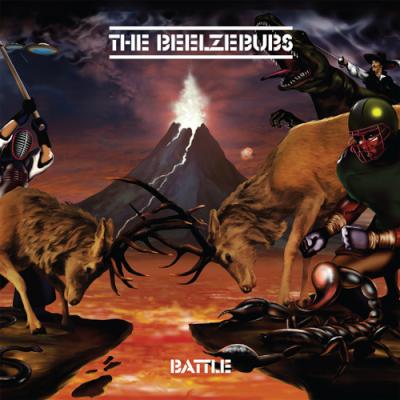 The Tufts Beelzebubs have a winner with BATTLE. Ed Boyer produces energetic deliveries and carefully crafted textures while Bill Hare puts everything in its precise sonic place, and Alex Koutzoukis (and others) surgically remove anything that might besmear sterling pitch or rhythm. The end result is a space that allows the talented singers of the Bubs to showcase their copious talents.

The Bubs have the layered intensity needed for songs like The Show Must Go On and Kings and Queens, but they absolutely thrive with '70s (and '70s-inspired) tunes like Closet Freak, Bump 'N' Grind, Feelin' Alright, Give It to Me Baby, and even the Hall & Oats classic Sara Smile. The Bubs create an insanely fun party atmosphere, and it's near impossible not to start body rolling to the funkiest of their tracks.

And while collegiate groups embarrassingly and routinely fail to credit the very composers of the songs they cover, the Bubs show they are every bit the moral leaders by providing exemplary liner notes. They credit each and every composer by name and their publishing companies, and they still have plenty of room left for arrangers, soloists and vocal percussionists. We learn which engineers worked on which songs and in what capacity, and we even get a group introduction and supporters' thanks. Oh — and if that weren't enough, the artwork will bring a smile to your face! Will you most enjoy the robot? The bear? The pirate riding the dinosaur? It's a BATTLE. Obviously.

So why not perfect scores? Sometimes leads aren't perfectly suited to their songs. Sometimes the arranging goes on auto-pilot. Sometimes the song just doesn't go where it needs to. But in all of these cases, we're talking about the difference between very good and excellent. Where critics critique, most listeners will simply sit back and enjoy.

One final note: I would have appreciated a little less diversity of genre and greater exploration of a smaller stylistic arena. Timshel is absolutely touching, and Agnus Dei is heartbreakingly beautiful. But do they belong on the same album as Bump 'N' Grind? Probably not. Album programming must take into account more than the excellence of the track. To fully ascend from the trappings of the songs-we-like-to-sing-syndrome, group identity is a challenge that must be squarely faced. That said, Bubs fans far and wide have much to celebrate in BATTLE.

Reviewing an album from the Tufts Beelzebubs is easy.

It's not pre-ordained that it's going to be excellent, but going back to Foster Street — which yes, I'm old enough to have bought when it first came out (and which a friend has since destroyed, much to my chagrin) — they've never put out a bad release. Indeed, the Bubs have one of the most, if not the most, consistent track record of sustained excellence over 20+ years of any collegiate a cappella group. So when their CD arrives in the mail, you know it sure ain't gonna suck.

So let's dispense with the obvious: BATTLE is phenomenal. As one would expect from Ed Boyer and Bill Hare, the sound is unassailable. It has a level of precision and attention to every detail — from the singing to the sampling to the arrangements to the mixing — that is so obviously head and shoulders above most other collegiate (and even some pro) groups. The fact that it's par for the course for the Bubs makes it no less remarkable. Indeed, what the Bubs do so right just reinforces what so many other groups — even good ones — are not doing nearly as well.

Yes, you will note that there are a few individual "4"s scored above — but to be fair, those are high "4"s. Those songs are lovely sounding and enjoyable to listen to, but they just lack that extra something that it takes to elevate a song from a "4" to a "5" in this day and age when so many mediocre groups can put out great-sounding albums. To paraphrase the Supreme Court: I can't define it, but I know what it is when I hear it. And thankfully, whatever "it" is, the vasy majority of BATTLE has it in spades.

Many of you probably own this one already, but if you don't, stop reading and start buying.

There doesn't seem to be a genre that the Tufts Beelzebubs can't do well. On BATTLE, the group tackles contemporary rock, classic rock, R&B, folk, funk, and reggae (!), all smoothly. The fact that this group can follow the groovin' beats of CeeLo Green's Closet Freak with the theatricality of Queen's The Show Must Go On says it all: each song is true to its original, and yet the consistency of the Bubs' tone and arrangements makes them work together surprisingly well. A mixtape of the originals would sound choppy; a Bubs album sounds cohesive.

But just because the Bubs can do a competent version of a song doesn't necessarily make it interesting: several of these songs settle into a groove and never really go anywhere. One could blame the original (Bump 'N' Grind, for example, is incredibly repetitive), but the group (arranger, music director, etc.) also has a responsibility to make the version of the song interesting to listen to, with dynamics, arrangement nuances, and so on. One Day is similarly repetitive (one doesn't expect much else from reggae, though), and although the Bubs sing it beautifully, it's just not that interesting to listen to. The arrangement of Feelin' Alright is really cool until the repetition of the song's title becomes a little tiresome — and the "uh-hunh" in the background just feels unnecessarily heavy when sung by so many voices.

It may sound as though I'm being hard on the Bubs. Perhaps I am, but they've also raised the bar so high that we always expect greatness from them. Truth is, even the "good but not great" songs here are still really, really good — most groups would kill to be able to create music this good. But the songs on BATTLE that are truly great certainly outshine many of the "just good" tracks. Careless is the standout track here: Penn Rosen sings the solo and wrote the arrangement and should get accolades for both. The song starts at a whisper and has a beautifully smooth dynamic arc that follows the emotional journey of the song, and Rosen's solo is soaked with heartbreak here. Songs like these make me wish that RARB had a score of "6"; it's gorgeous. (Every group that struggles with how to make ballads interesting should listen to this track and take notes; it is so good that it should become a textbook example.)

The Show Must Go On and Agnus Dei are both fantastic as well; the former shares with Careless a really nice dynamic arc that swells as the song's drama increases, while the latter is beautifully haunting. The choir on Kings and Queens is credited to "[o]ur family, friends, and fans throughout the world", and that big, bold sound captures the passion of the song — and luckily, soloist Matthew McCormick is able to match that volume and not get swallowed up by it.

The liner notes for BATTLE are great as well: the group credits the original performers as well as the songwriters and publishing companies, plus each song's arranger, soloist, and vocal percussionist. The recording/production credits are clear and thorough as well. This may not seem like much, but it does show an attention to detail and an appreciation for all the people behind the scenes — from the songwriters to the recording engineers — who made the album sound the way it does. There are some truly outstanding moments on BATTLE, and even with a few somewhat forgettable numbers it still holds up well in the Bubs' long catalogue of solid albums.